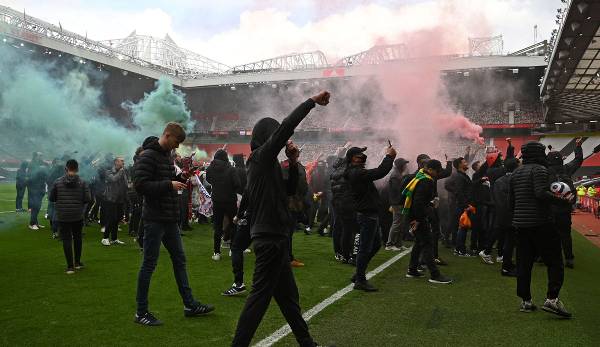 Manchester United is in a sporting impasse, which also has a lot to do with the owners, the Glazer family. They ran the club down and made a lot of money themselves while the other clubs grew. But Manchester United is still such a big brand that they don’t want to give up voluntarily. After all: The richest man in England is interested – and also Elon Musk?

Elon Musk just had some time to tweet again. Whereby: He actually always has the time, but this time he had so much time that he caused an uproar in the world with two tweets. First he announced his political stance that he supported the left wing of the Republicans and the right wing of the Democrats in the USA and filled the papers in the States. And then he wrote: “I’m buying Manchester United, you’re welcome.”

Even if you almost had to assume that the richest man in the world wasn’t serious about United, a Musk avalanche rolled over the football planet. That “ur welcome” at the end of the tweet had something to do with Zlatan Ibrahimovic, who ran a full-page ad in the Los Angeles Time on his farewell to the 2018 Los Angeles Galaxy. “Dear Los Angeles, you’re welcome,” it said. Then nothing.

Back then, people laughed heartily about Zlatan and today the ad still makes at least a smile. Very few could laugh at Musk, who spoke of a joke a short time later, on Wednesday. Especially not the supporters of Manchester United. They’ve longed for years for someone to replace the hated Glazer family. The emotions are now so high that you can’t take jokes.

How? It feels like it’s getting worse with each passing year. Even when the club was bought by Malcolm Glazer in 2005, there was no sympathy for a man who leveraged the club’s takeover and left United hundreds of millions of pounds in debt overnight. But at first the sporting successes were still there. Manchester City didn’t matter, Sir Alex Ferguson won the titles, had a very solid squad, everything was good.

Manchester United: Will the game be abandoned again?

But now ManUnited only plays a supporting role, city rivals Manchester City are light years away in sporting terms, none of Ferguson’s successors became champions, the squad is okay at most and nothing is good anymore. Even before things were so dramatic, United supporters protested against the Glazers.

Now, after finishing bottom of two Premier League games after losing disastrously to Brighton & Hove Albion (1-2) and Brentford FC (0-4), the anger is at an all-time high. Before Monday’s league game against Liverpool, United fans want to protest again.

United fans have used a Liverpool game as a stage for their protests before. In May 2021, they are protesting their club’s intention to take part in the Super League. The game was then canceled. A peaceful protest has been announced, but another game cancellation would at least not be a sensation.

In fact, Erik ten Hag was a well-considered idea

While for years only the financial experts knew how the club was doing, even the last football fan now feels that something is going completely wrong. The Glazers wanted to do things differently this time. Instead of taking a quick shot at the coaching position, they spent weeks scouting and interviewing a capable man for the most important position in their football department and came up with Erik ten Hag.

The decision seemed to make sense, but they left the Dutchman alone after signing with the massive problems Manchester United are struggling with. The transfer season is a farce: Countless big names have been traded, but the strategy doesn’t make sense. The announcement that ten Hag will be the new coach was made in April. So there was plenty of time to give the 52-year-old a team to work with. Instead, just a few days before the transfer window closes, United are still looking for several reinforcements in key positions as if by storm.

The fact that everything is progressing so slowly is mainly blamed on the Glazers. They do not show that they are interested in the sustainable development of Manchester United. The financial movements in the accounts are large, according to consistent reports, but most of them are not to England but to Tampa, where the Glazer family is based.

“We can scold the players all we want, but there are so many big things that need to be fixed first,” says club legend Gary Neville about the Glazers: “You have to show up and face yourself. The time has come! They can’t keep hiding in Tampa and think nothing will happen to them.”

It’s facts that will hurt and anger any fan. To Avram and Joel Glazer taking control after the death of their father Malcolm and making the club their plaything. But the brothers aren’t alone: ​​Family members Kevin Glazer, Bryan Glazer, Darcie Glazer Kassewitz, and Edward Glazer all sit on the board. As the annual report shows, they hold shares that account for 97 percent of all voting rights. There is something of a football dictatorship at United.

Especially since the Glazer family is not ready to give up power either. After the 0: 4 against FC Brentford it was scattered in the media that the Glazers were ready to possibly give up a few shares and were open to offers. However, the reports seem to come directly from Glazer to take the wind out of their sails. Similar reports were also spread in earlier phases of escalation without a sale or even a conversation ever taking place.

The fact that there are no interested parties can be ruled out anyway. United is certainly having a difficult time in terms of sport, although one must not forget that despite all the misery, the club finished runners-up in 2020/21 and reached the Europa League final in the same year (which they lost to Villarreal FC). But the claim is different and the mass of fans worldwide make United interesting for every investor.

According to a 2018 study by Bloomberg, United has over 650 million fans worldwide – that would be almost ten percent of the world’s population. Of course, the numbers also have the Glazers, who are reluctant to sell – or who voluntarily gives up one of the most well-known brands in the world just like that?

There has to be a price that makes them weak. A price Musk could certainly have paid. One that Jim Ratcliffe can certainly muster. The 69-year-old is considered the richest man in England, his fortune is said to be around 17 billion euros.

Will the richest man in England step in?

A spokesman for Ratcliffe confirmed the interest of the chemical giant in the Times: “If such a thing were possible, Jim would be interested in discussions regarding a long-term acquisition.” Ratcliffe says he has an emotional connection to the club and sports investing is nothing new to him.

In 2017 he bought the Swiss club FC Lausanne. Two years later he bought the OGC Nice and also invested in the Sky cycling team. Formula 1 fans should know his company Ineos on the stickers of the Mercedes car. Ratcliffe is one of the main sponsors there. The entrepreneur wanted to strike at Chelsea FC, but lost the race to Todd Boehly. So now Manchester United?

It’s true that there will again be United fans who will resent the Chelsea number, but whoever can prevent the greater evil Glazer is probably welcome. It is doubtful whether the Glazers will be impressed by this. It would have to be a staggering amount of money to get them into talks with Ratcliffe.

Or with Elon Musk? When a Twitter user asked him on Wednesday if he was serious about the act, he said he was a Man United fan as a young boy but he doesn’t take on sports clubs. If so, “then only ManUnited”. It’s no joke, but it’s cold consolation.