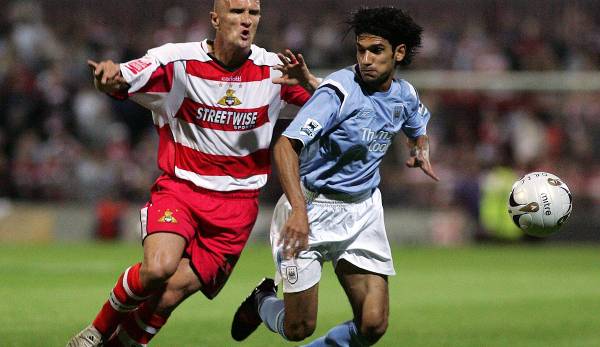 Hussein Yasser started his footballing career in Qatar before a lie landed him at Manchester United and City.

What do Peter Schmeichel, Andy Cole, Carlos Tévez and Hussein Yasser have in common? Anyone who knows the answer to this question can truly call themselves a football expert and can now give themselves a pat on the back. For everyone else, the solution: Each of the players mentioned was under contract for both Manchester United and Manchester City during their careers as professional footballers.

And this is where the similarities end. While the first three had spectacular careers, Hussein Yasser was denied the really big hit. And his path to the city rivals from Manchester was anything but ordinary. After all, the Qatari’s agent, Rene Meulensteen, lied about his client’s nationality in order to place him with the Red Devils in the early 2000s.

Yasser, now 40, was playing for Al-Rayyan SC in 2002 when his agent, who was also the Qatari national team coach, put him in touch with Manchester United. More specifically, to none other than Sir Alex Ferguson. Meulensteen showed Ferguson and the United officials videos of Yasser, which were well received. The problem: Qatar was not – and still is – not known as a great footballing nation. So Meulensteen dug deep into his bag of tricks.

“Right from the start he told Manchester United I was a young, up-and-coming Brazilian. But Rene was a guy who liked to joke around. And I think it was just more interesting for him to say he has a technically strong Brazilian player instead of a player from Qatar,” Yasser recalled.

Ultimately, United officials must have known, or at least suspected, that they had scouted a Katari – but they went for it anyway. “I wanted to play in Europe, I was allowed to do a trial. I did my best and everyone saw that I had the talent to stay, so I was signed,” the Qatari recalled the events of June and July 2002. So he joined Manchester United at the age of just 19. Where he was allowed to stay for almost exactly a month.

In order to gain match practice, Manchester United loaned the young player to the Royal Antwerp training club in Belgium. But things were not going well for Yasser at this station: “Manchester United didn’t pay any attention to us young players. I was there for two years, very far from Manchester, and then made the proposal to be loaned to a better club. But United said no,” Yasser said.

Haaland not in 1st place! That would cash in on newcomers as influencers

So the then 21-year-old decided to look for a new club. He went to AEL Limassol in Cyprus for half a year, then again to Al-Sadd SC in his home country of Qatar for half a year. And then, in August 2005, Yasser hit Manchester again. But this time he landed a contract with Manchester City.

“I was allowed to audition again, scored a goal in my first game and was signed after three days,” Yasser looked back. Suddenly he was training with later legends like Andy Cole and Robbie Fowler. But that was “nothing new” for the Katari – after all, he had already played with Gary Neville and Diego Forlan at Manchester United.

Yasser even had an anecdote about current Manchester City manager Pep Guardiola. “When I returned to Manchester from Belgium in 2005 after the birth of my child, I saw Pep Guardiola in the hotel lobby. That was funny, he had also played in Qatar recently and we had played each other once or twice,” said the 40-year-old. And he continues: “Guardiola was training with City at the time, but he was not signed.” The background: The Citizens only presented today’s star coach with a contract for six months, who refused and said: “I have a family, I would rather go play golf or end my career.”

And Yasser also left City after just four months. After all: If you look back at the career statistics of the Katari, who finally hung up his football boots in 2018, his statistics include 59 appearances in the Premier League, in which he scored nine goals and presented seven more.

The stupid thing: The top division in Egyptian football is also called the Premier League. Yasser was never used in England’s flagship league. He was only allowed to appear once for City in today’s EFL Cup. “But we started with a team full of rotation players, not with the best eleven,” recalled the 40-year-old. More than 70 minutes for the Citizens were not possible.

“Pep Guardiola said to me at the time that I would never play at Man City. When I asked him why, he said that the team would only play long balls at Andy Cole or Darius Vassell,” explained Yasser: “He said me if we both played at City we would never stand a chance of touching the ball simply because of the way the team played back then.”

Hussein Yasser’s next attempt in Europe

At the end of his 17-year career as a professional footballer, Yasser had been under contract with 16 teams. Qatar, England, Belgium, Egypt, Spain, Portugal – the 40-year-old got around properly. And even after his playing career ended, he stayed in Europe. More precisely in Dublin, Ireland.

Yasser has been trying to get his UEFA A coaching license there since 2020. Are you allowed to the statements of Sports Bible Believe it or not, the 40-year-old is still working on this project. But the Katari doesn’t want to be defeated: “I prefer to work on my career as a coach in Europe. Maybe I can now do what I couldn’t do as a player. I know it’s not easy. But why should I don’t you try?” he asked.