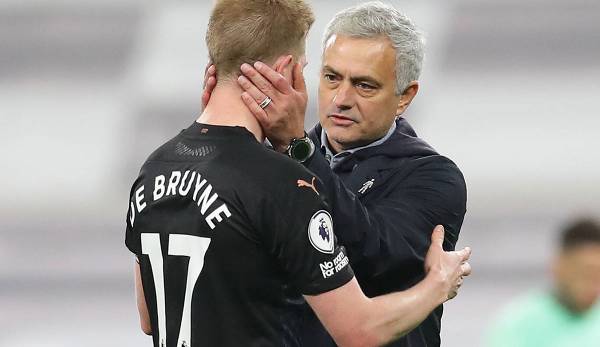 Kevin De Bruyne is the best player on possibly the best team in the world, coached by the best coach in the world. Teammates emulate him, the coaches love him. But the Belgian’s career also includes some provocation.

It may come as a big surprise to some, but life also means that you can sometimes be wrong. Not seeing the obvious, not anticipating what is to come. And it may be even more surprising that it can happen to even the best. Even a Jose Mourinho.

In 2013, Kevin De Bruyne returned to Chelsea from a loan spell at Werder Bremen, where Mourinho had long since taken over again. De Bruyne actually wanted to go again – preferably to Borussia Dortmund. The plan fell through due to Mourinho, who wanted to keep De Bruyne in the squad. However, he only allowed the playmaker 133 minutes until the 5th matchday – after that it was paid vacation.

When Mourinho asked for a feedback session at the end of the year, the Portuguese had a few sheets of paper on his desk and showed De Bruyne his statistics of the season: “Zero goals, zero assists.”

“He started listing the statistics of the other attacking players like Willian, Oscar, Mata and Schürrle. Five, ten goals and so on,” says De Bruyne, but the Belgian knew how to defend himself: “The guys they listed had 15 to 20 games. I only play three. There’s a difference, isn’t there?”

As always, Mourinho was unimpressed, but was patronizing again: “If Mata should go, you’re my fifth choice, not my sixth.”

They never spoke again after that, De Bruyne moved to VfL Wolfsburg, then to Manchester City and what the numbers look like on paper today can be read and admired on any commercially available statistics page.

Kevin De Bruyne does not serve as a cinematic self-made superstar story because his extraordinary talent was discovered early on and Mourinho was also aware that De Bruyne is a very suitable player, but found others better at the moment.

Mourinho has his own version of the story anyway: “He impressed me so much that I didn’t want him to go on loan. I wanted him to stay and he started our first league game against Hull City.”

But a starting eleven was apparently not enough for De Bruyne: “In the second game we went to Old Trafford and then he came to me and said: ‘I want to play every game, I want to play every minute.’ He put a lot of pressure on.” He leaves it open whether that’s the reason why De Bruyne didn’t play at all anymore or why Mou wasn’t able to properly assess the potential of the young Belgian.

Scholes: ‘De Bruyne is the best midfielder in the world’

You can do it like Mourinho, counting goals and assists, but De Bruyne is so much more of a stats producer. It’s a reason you go to the stadium. It combines elegance and killer instinct. You like to watch him, but you also have a lot of respect as an opponent, because De Bruyne can completely change a game at any time without warning.

When City last swept local rivals Manchester United 4-1, De Bruyne was the match-winner with two goals and one assist and enraged United legend Paul Scholes had to praise the opponent’s playmaker: “He’s the best midfielder in the world since no one can hold a candle to him.”

Many actually share the same opinion. He is held in particularly high esteem by coaches. Whether Jürgen Klopp: “I love him. I wanted him at Dortmund when he was still at Chelsea, but Jose didn’t want to give him to me.” Whether Belgium national coach Roberto Martinez: “A player with a great vision.” Whether – look here – Jose Mourinho: “His quality speaks for itself. He is one of the top 5 in the world.” Whether his own coach Pep Guardiola, who often goes longer when he talks about De Bruyne. But more on that in a moment.

Regulars at the bottom – top earners in their own league: City salaries

The admiration is great even among the players. Jack Grealish, for whom Man City paid over €100m before the season, told how as an Aston Villa player he emulated his eventual team-mate and even studied his passports.

Grealish says: “I looked at clips of De Bruyne. I said that’s what I want to do too. I want my final pass to be the same. That’s what I worked on then. Last season I got into 25 or 26 appearances and ten assists, which is a good number. The basis for that was Kevin’s style of play and the way he keeps finding that perfect last pass.”

There is probably less recognition for a footballer than being seen as a role model and valued by capable peers. The fact that Grealish is not alone in his opinion proves the vote for the player of the year, which is held in England with the votes of the footballers and is of great importance.

For legend Teddy Sheringham, it’s the “most important personal title you can get.” John Terry calls it the “ultimate award” for a professional soccer player because the votes come from peers. The last two times De Bruyne was clearly the winner. In the long history of the award, only Thierry Henry, Cristiano Ronaldo and Kevin De Bruyne have received two awards in a row.

Guardiola: “Without De Bruyne, the successes would not have been possible”

He is already the favorite for this year’s award. Even if the season started off difficult, with an injury from the Champions League final against Chelsea, which also accompanied him at EURO 2020 and at the start of the season. And a corona disease after returning. So maybe he’s not having the best season of his career, but again so well that it’s enough to praise him highly.

Coach Pep Guardiola is certain: “I’ve been working with Kevin for six years. All the successes we’ve had would not have been possible without him.” He describes him as a “worldwide unique player” who has “extraordinary” skills. And yet Pep sometimes wants to see more of his best horse.

“My job as a coach is to always ask for more. I want to get him out of his comfort zone and make him believe he can do better,” said Guardiola, adding: “I think Kevin can do it can do it. I want more because I know he can do it.”

Six years together is enough to see how a player ticks. Guardiola would hardly choose this kind of slight provocation if he didn’t know that it would help his player to become even better. He challenges a player who doesn’t shy away from confrontation. On the contrary, he sees it as a challenge.

Maybe that’s the late realization from the time with Mourinho. Had he stayed then instead of fleeing to Germany, his Premier League career could have ignited much earlier. But it is also part of life that one can sometimes deceive oneself. Not seeing the obvious, not anticipating what is to come. And it may be even more surprising that it can happen to even the best. Even a Kevin De Bruyne.