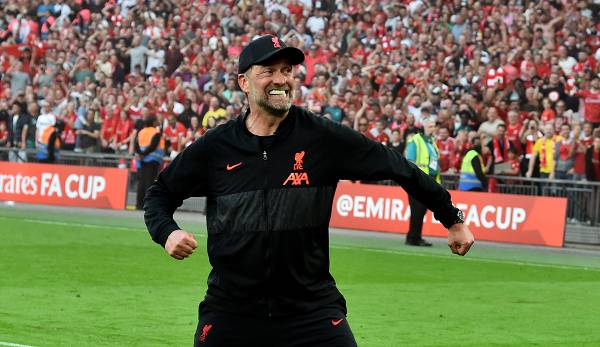 Klopp wins again, Tuchel loses again: Liverpool FC wins the second title of the season – on a historic day for his team manager.

The King of Liverpool was the first to be congratulated by Prince William. The Duke of Cambridge, in his capacity as President of the English Football Association, had just said a few words of consolation to Thomas Tuchel when Jürgen Klopp was already standing in front of him, grinning broadly. The British heir to the throne handed him the gold medal for the triumph in the FA Cup – the German was the last to lift the trophy.

It was a historic night at Wembley, where 84,897 spectators witnessed the first victory by a German team manager in the world’s oldest football competition. “Massive” is this triumph, so huge, said Klopp.

Like the League Cup final between Liverpool and Chelsea in February, the 150th FA Cup final culminated in a penalty shoot-out after 120 minutes without a goal – the Reds won 11-10 then, this time 6-5.

Klopp’s outbursts of emotion after Konstantinos Tsimikas’ decisive goal for his “mentality monster” spoke volumes: He happily ran after his players on the pitch, danced in front of the stands and threw kisses at the audience. “It was,” he said later, “an incredible, intense game.” Chelsea, he added, “should have deserved it, but in the end there can only be one winner”.

Won the League Cup, won the FA Cup – now what? In the exuberance of his feelings, Klopp even dared to talk about the one-time quadruple triumph this season. “The quadruple – it’s amazing that we can talk about it, it’s crazy,” he said, but: “It’s going to be incredibly difficult. It’s possible, if you will, but it’s also kind of not.” Somehow not, because the championship seems out of reach.

On May 28, Liverpool will play Real Madrid in Paris for the Champions League title. First of all, the Reds have to go to Southampton in the Premier League on Tuesday, and what worries Klopp even more is the condition of Mohamed Salah and Virgil van Dijk. Both had to leave the field prematurely in the final on Saturday – at least their commitment in the final of the premier class does not seem to be in jeopardy.

Winning the FA Cup means a lot in England and Klopp never tired of mentioning how much his side had invested in bringing him to Liverpool for the eighth time and for the first time since 2006.

“You could see from the performance of the players how much that means to them. It was the 60th game of a very intense season and then to produce such a performance is absolutely unbelievable,” stressed the German coach.

It was Chelsea’s third consecutive defeat in the FA Cup final, having lost to Leicester City last year. Tuchel admitted that it will not be easy to get the team back on its feet for the last two games of the season, but also emphasized: “The season is not over yet. We still have goals in the Premier League.” At least participation in the Champions League is within reach.