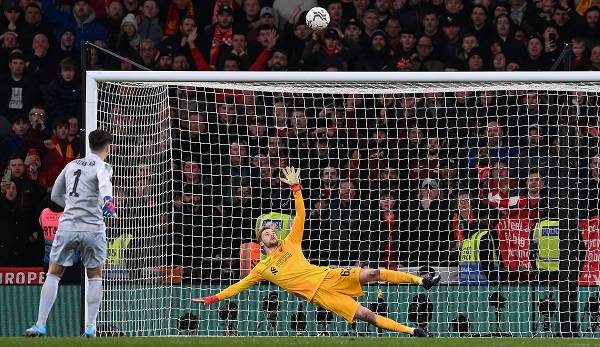 At least there was no controversy including a tantrum from the coach this time, but the relationship between Chelsea goalkeeper Kepa Arrizabalaga and the English League Cup does not seem to be positive for the Spaniard anymore.

February 27, 2022 at London’s Wembley Stadium curiously followed February 24, 2019, which Kepa meanwhile made, at least on the Internet, what he is no longer in the club today – number one.

That day, Chelsea met Manchester City in the final of the EFL Cup, as the competition is called at least in the official statutes without a sponsor’s name.

Shortly before the end of extra time, Kepa was treated by the Blues’ physios and then coach Maurizio Sarri was already preparing to be substituted for reserve goalkeeper Willy Caballero. The Argentine was considered a penalty killer at the time.

But Kepa stubbornly refused to leave the place. Even when the fourth official was already holding up the board with the two shirt numbers, he didn’t even think about giving up his seat. Finally, the substitution was not carried out, which made Sarri furious on the sidelines.

Even more after the end of the penalty shootout which Chelsea lost. Kepa saved a penalty from Leroy Sane but that wasn’t enough to clinch the title as Chelsea’s two missed shots.

Sarri, as the Italian’s facial expressions and gestures made it clear, would have liked to jump for Kepa’s throat, Antonio Rüdiger had to hold his coach back. More than two years later, Kepa explained and spoke of a “big misunderstanding”. Although he felt a pain in his leg, this was never a reason for having to be substituted. Instead, he just wanted to give his team some time to catch their breath – when he suddenly saw that the substitution was imminent.

“I wanted to signal that I was okay. But we were in front of 80,000 people at Wembley, so of course Sarri didn’t understand me. When the fourth official held up the scoreboard, of course I should have gone down. I’m sorry I did didn’t do,” he said Players’ Tribune. At least he involuntarily filled the internet with tons of memes in the days after the 2019 finale.

Kepa in 2022 EFL Cup Final: Not another stroke of genius

Now, three years later, the signs were reversed. The coach is now called Thomas Tuchel, but Kepa is only a second choice under the German. At least in the League Cup, the now 27-year-old was allowed to play in every game, but not in the final against Liverpool. Here goalkeeper Edouard Mendy got the preference, who showed an outstanding performance. But there was already an agreement that Kepa should come on in the event of a penalty shoot-out. That also happened, without controversy, in player swapping. But again, Kepa should be the headlines in hindsight.

Because the consideration with the Spaniard – unlike in the UEFA Supercup against FC Villarreal – did not work out. In August, Kepa, who had just come on as a substitute, saved two attempts from Spain on penalties to become the Blues’ match-winner. In London against the Reds, however, he didn’t save a single one of eleven penalties, and he wasn’t even able to defuse the attempt by Liverpool keeper Caoimhin Kelleher. But since all Chelsea players also converted more or less safely, Kepa also had to shoot himself – and chased the ball into the London night sky.

Tuchel defended his goalkeeper after the defeat. “If you want to blame someone, blame me. I make the decisions and I don’t make them to be the hero,” he said, adding, “It’s tough and we feel for him, but we don’t blame him The fault. We made the decision like we did before the last penalty shoot-out because Kepa trains with the players every day. And they know how good he is.”

Kepa himself posted at Instagram a picture of himself and the team that built him up after his failed attempt. “Fall and get up. Disappointed after the great effort during the tournament. We keep working. Thank you Chelsea family for your support,” he wrote.

Kepa at Chelsea: In the shadow of Mendy

The League Cup and Kepa, it will probably no longer be a love affair. And otherwise the still most expensive goalkeeper in the world threatens to disappear into insignificance. In 2018 he came from Athletic Bilbao for 80 million euros – far above value, but the Basques insisted on the existing release clause. And Chelsea were in dire need following the departure of Thibaut Courtois to Real Madrid. But Kepa could not live up to expectations and made too many mistakes.

After Frank Lampard took over as coach from Sarri, Kepa found himself on the bench more often. However, he only finally moved into the second rank after Edouard Mendy signed in September 2020. Two years after Chelsea had spent 80 million euros for Kepa, who was planned as a long-term regular keeper, the next goalkeeper transfer worth millions now followed. Since then, Mendy has been in the “big” games, i.e. Premier League and Champions League.

And while Mendy impressed with his bio, which took him from the lowlands of football to world goalkeeper, Kepa remains only the role of the shadow man. He has also since lost his place in the squad for the Spanish national team. And so he probably only has the prospect of a number one role on the net.