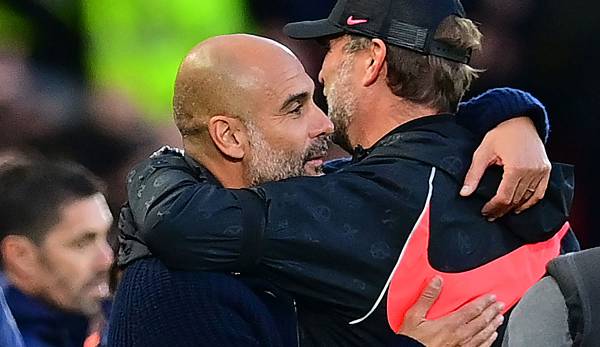 Pep Guardiola – again. For Jürgen Klopp it’s all about the title again against the Spaniard. “Maybe we could have won more titles in Dortmund if Pep hadn’t been at Bayern. It’s similar now,” said Klopp before the showdown for the championship in England between his Liverpool FC and Manchester City (Sunday, 5:30 p.m.): ” Imagine, if he wasn’t here, we probably could have won at least one more title.”

If he were a “different person,” said Klopp, “I would probably be a bit depressed that Pep Guardiola coaches teams like this all the time.” But he doesn’t think like that: “Thank God.”

Klopp against Guardiola, Liverpool against City – alongside Klopp, the whole of England is still looking forward to this Premier League title showdown. And the German assumes a spectacle. “I expect a good game. I know that’s often not the case when two top teams face each other,” said Klopp, but “our history with City shows that the duels were often very interesting because both teams really gave everything to have.”

A few weeks ago it was unthinkable that it might be about the decision about the championship. But after ten league wins in a row, the Reds are just one point behind leaders and defending champions Manchester – in December it was 14 points.

But Klopp does not assume that the champion will already be determined on Sunday. “If we win, we’re two points ahead, does anyone think that’s it?” said the 54-year-old, adding: “If we lose, we’re four points behind. If we draw, we’re one point behind – that’s it.” After the duel, there are still seven league games on the program.

Hamann sees Liverpool at an advantage

But the trend speaks for Klopp this time. “I don’t see anyone as a clear favorite, but there’s a lot to be said for Liverpool,” said former international and Sky expert Dietmar Hamann SID: “They are now incredibly stable and hardly concede goals.”

And that’s why the fans in Liverpool are also dreaming of the quadruple this season. They have already won the League Cup – but the final opponent for the three remaining cups is probably ManCity again. The FA Cup semifinals on April 16th will also face the sky blues, who are also possible opponents in the Champions League final (May 28th) in Paris.

But now only Sunday counts. And Klopp feels comfortable being the hunter. “There’s no pressure, it’s just an opportunity,” he said, enthusing about Guardiola (“Best Coach in the World”) and City (“Crazy Team”). He can’t say he loves many opponents, “but I really like watching City. They have no weaknesses.” But the “good thing” is that “we’re not too bad either.” And so it is between Klopp and Guardiola for the title. Yet again.