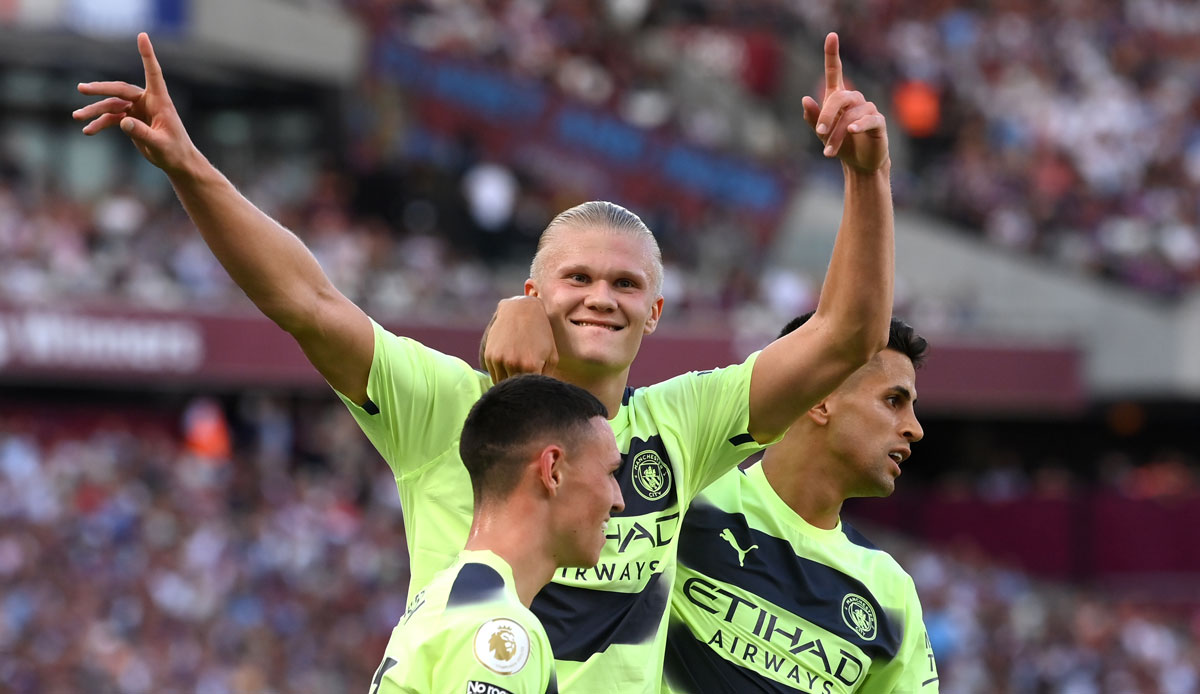 Star striker Erling Haaland gave the English football champions a tailor-made start on his Premier League debut for Manchester City. The Norwegian shot Pep Guardiola’s team to victory in a 2-0 (1-0) win over West Ham United with his debut brace.

The Norwegian shot Pep Guardiola’s team to victory in a 2-0 (1-0) win over West Ham United with his debut brace.

After West Ham’s goalkeeper Alphonse Areola put the rushing Haaland in the penalty area, the new signing from Borussia Dortmund converted the penalty kick to make it 1-0 (36th). A fantastic preparatory work by Belgian national player Kevin De Bruyne was effortlessly scored by the Norwegian for the preliminary decision (65′).

The guests, who also included the German national player Ilkay Gündogan in the starting XI, improved compared to the 1:3 defeat against Liverpool FC in the final of the English Supercup (Community Shield). With the opening success at West Ham, the team from Manchester underlined their ambitions for the third championship title in a row.

It was worse for city rivals Manchester United: The English record champions messed up the start of the season under the new team manager Erik ten Hag with his superstar Cristiano Ronaldo as a joker.

Former Bundesliga professional Pascal Groß spoiled the game with a double in the 1-2 (0-2) against Brighton & Hove Albion.

The former U20 national player first scored after clever preliminary work from ex-United professional Danny Welbeck (30th), then the German dusted off a shot from Sonny March, which United keeper David de Gea fended off at his feet (39th). . In the twelfth game against ManUnited, it was already hits five and six for Groß.

Manchester’s new signing Christian Eriksen initially tried his hand at the ‘false nine’, but without making much of an impact. Ronaldo moved into the lead after coming on as a substitute in the 54th minute. However, the Portuguese was no longer able to turn things around.

The hosts shortened the lead at Old Trafford with an own goal from Alexis Mac Allister (68′), but the equalizer was no longer successful.

Under their new coach, the Red Devils owed a lot over long stretches of the game. The fans said goodbye to their team after the first half with a whistle in the dressing room.

“Of course it’s a setback and a real disappointment,” said ten Hag after the game. “I knew from the start that it wasn’t going to be easy.” Referring to the many chances he had, he said: “It’s a shame we didn’t score.”

Ten Hag continues: “I’m not satisfied, absolutely not. We lost and that wasn’t necessary. We should do better. (…) It’s a damn difficult task. We have to work really hard, analyze and then move on .”

Ronaldo caused a stir with his escape from the stadium in the friendly against Rayo Vallecano. Ten Hag found the behavior of the 37-year-old, who had previously officially missed the preparatory tour to Thailand and Australia for personal reasons, “unacceptable”. Ralf Rangnick’s successor initially put the Portuguese on the bench at the start of the league. Only in the 53rd minute did he send him onto the field.