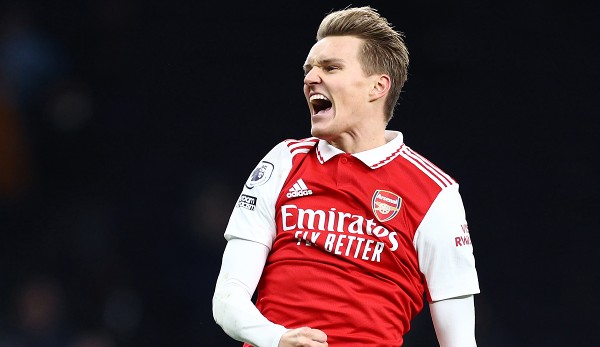 Martin Odegaard is one of the faces of Arsenal FC’s recovery. Real Madrid once had no use for the Norwegian.

Ironically, when Martin Odegaard led Arsenal to victory in the north London derby, Real Madrid suffered a grisly defeat by Barcelona in the Spanish Super Cup on Sunday. Why Madrid were willing to let Odegaard go 18 months ago when the club’s midfield was in dire need of a refresh is anyone’s guess. The loss of the Madrilenians is certainly a win for Arsenal.

Coach Mikel Arteta’s young, dynamic side are chasing records this season – and Odegaard is at the heart of that side. The Norway international was sensational on Sunday as Arsenal clinched their first league win at Tottenham since 2014 to move eight points clear at the top of the Premier League. It was a wonderful performance that fitted in perfectly with what he’s already done this season.

“Great,” beamed Arteta afterwards when asked about his captain. “Especially in the first half he was incredible. What he did here today – kudos to him.”

Odegaard was simply far too good for Tottenham as Arsenal widened their lead over Manchester City at the top of the table. His movements, speed and vision often embarrassed the hosts. Even when Spurs tried to kick him, they barely got close enough to do so.

The fact that he crowned his performance with the decisive second goal was the icing on the cake. “It was a good goal,” said the Gunners captain. “I had a similar shot before, now I was very happy that it went in.”

It was Odegaard’s eighth goal of the season and also put him top of the club’s goalscoring charts. It’s a big step forward for a player who was seen as not scoring enough goals earlier in the season. And it shows how much Arteta has positively influenced his game.

The Arsenal manager was determined to keep the 24-year-old at the club after his successful loan from Real Madrid in the second half of the 2020/21 season. He could have considered other transfer targets as Madrid balked at a potential deal but Arteta remained patient and awaited the green light from Spain. When that finally came, there was no hesitation and the trust Arsenal placed in Odegaard is now being amply repaid.

When Odegaard arrived in England, some pundits wondered if he wasn’t too easy for the Premier League. He was seen as a player who would oscillate between bench and starting XI. But Odegaard has proved the critics wrong this season. Of his eight goals in the league, he has scored six away.

“Martin really shows a different kind of presence with the way he influences the game,” said Arteta. “The feeling, the way he moves and what he conveys on the pitch is just different.”

Arsenal went into Sunday’s derby at Spurs knowing they had picked up just two points from a possible 24 there in the past nine years. They had lost all three appearances at the new Tottenham Hotspur Stadium and only scored once.

Martin Ödegaard lives up to the captaincy

But Arteta’s side have already shown how much they’ve improved this season. And the manner in which victory was clinched was just the latest example of newfound belief in the title.

“It’s a great feeling,” said Odegaard after the game. “It was about time we won here. It was a great game, especially in the first half. We dominated and controlled everything. In the second half, the game was a little more open. They pushed for a goal, but we defended well.”

Ödegaard also recognized clear progress when it comes to taking countable items with you. “Last year and the year before last we played good football here, but we weren’t clever enough in crucial moments. But today we showed a different side and showed how much we’ve improved,” he said.

When Arteta Odegaard handed over the captain’s armband in the summer, there were many eyebrows raised as many wondered if he was the right type of player to lead a Premier League team. But his performance and numbers speak for themselves.

It’s not just the eight goals or the five assists. It’s his style of play, his personality when he has the ball and his technique in tight scenes that embodies everything that is good about this Arsenal side. This team is playing in perfect harmony right now – and their magical conductor is the main reason for that.