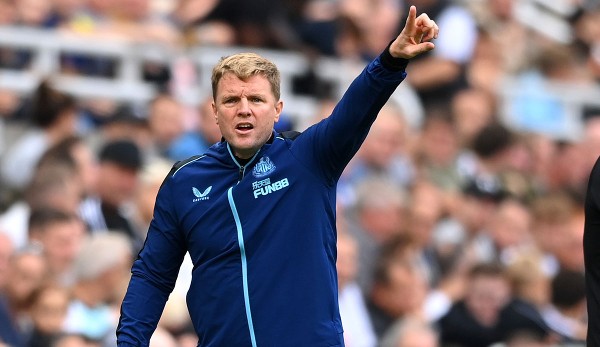 About a year ago, Newcastle United were still fighting relegation in 19th place, despite big investments from the Saudi millions. This season, the Magpies are playing for the Champions League places. About three “giants” and two “kids” on the defensive, a “magic”, goaded winger and the methods of coach Eddie Howe.

Sure, Newcastle will be at the top of the Premier League after the Saudi takeover – that’s what people thought in October 2021. But how long and how many hundreds of millions will it take?

The fact is: since the relegation battle in January 2022, the club has not spent as much Saudi money as the public assumed. In the madness of the Premier League, Newcastle are only 8th in transfer spend, with €136m.

Last winter, the Magpies mainly weakened the competition, in the summer they brought in Alexander Isak for the record sum of 70 million euros alongside some medium-sized names. Man United coach Erik ten Hag even acknowledged it: “You made the right investments and that should be appreciated.”

But the crucial obligation was something else: that of coach Eddie Howe.

The 45-year-old Englishman brings a wealth of experience from the sometimes difficult years at Bournemouth. Right-back Kieran Trippier told at THey Athletic on Howe’s methods: “We players love the training sessions and we feel better in the games than before. We have a better balance. The differences he has made are noticeable.”

Above all is the defensive, which now also stands for pressing after the season in the table cellar – a development can be clearly seen. The offensive is sometimes looking for a lot of ball possession, as in the 2-1 win against Tottenham Hotspur at times with 72 percent, and not only for counterattacks and standard situations.

Above all, Howe changed the general mentality. A symbol of success: The televisions around the complex have been showing all day long Sky Sports News – now there are goal celebrations from players from recent games, a countdown to the next matchday and the “Training Player of the Month” award.

The 2-1 defeat at Liverpool at the end of August was the only one in the league so far. Since then, Howe’s side have gone 13 games unbeaten, collecting 29 points and conceding just five goals. After 18 matchdays there are only eleven goals conceded, the disgrace in the FA Cup (1-2 against Sheffield Wednesday) on Saturday ended the series of six games in all competitions without conceding a goal. Nevertheless: Newcastle is currently the best defensive in England.

The flagship of the stable defense are three giants: goalkeeper Nick Pope (1.98 metres), central defender Sven Botman (1.95 metres) and the converted left-back Dan Burn, who at 2.01 meters is the tallest player in the league.

Kieran Trippier, brought back to England a year ago for 14 million euros, and the Swiss Schär, who has been with the club since 2018, ensure a good balance in defense with their duel strength. In addition, they balance out the proportions with 1.73 and 1.86 meters again.

Record goalscorer Alan Shearer is enthusiastic about the defensive: “He (Fabian Schär; Note d. editor) along with Trippier and Pope is a big part of why Newcastle are so solid at the back this season.”

Bruno Guimarães continues the axis in defensive midfield: the Brazilian World Cup driver came from Lyon a year ago for around 42 million euros and has been playing the best football of his career ever since. The 25-year-old admitted in conversation with Fifa+12 months ago the timing of the move was a difficult one, but he believes he was “born to play in the Premier League”.

Howe recently hinted that Guimarães’ performances had even surprised him positively, despite the hefty fee: “He did incredibly well. (…) His performances speak for themselves, I don’t have to comment too much.”

Ahead of Guimarães, Paraguayan Miguel Almirón, who has worn the Newcastle shirt for three years, is trumping. However, he has never been more successful than this season. In his first three Premier League seasons, which included exactly 100 games, the 28-year-old scored as many goals as in the previous 18 games: nine. “He’s able to do magical things,” enthuses coach Howe.

Almirón was a laughing stock before the season, at least in the circle of champions Manchester City. At the graduation ceremony in the summer, Jack Grealish poked fun at his team-mate Riyad Mahrez, comparing him to the Newcastle forward: “Put him down, as early as possible. He’s playing like Almirón.”

He only scored one goal in 30 games in 2021/22. With Grealish only appearing on the scoreboard twice more, his statement flew out of his head in no time. Around half a year later, the 117 million euro purchase is clearly surpassed: Grealish himself has only scored once this season so far.

Despite the many interlocking cogs and third place, Newcastle will probably not be able to intervene in the Premier League title race. They are nine points behind leaders Arsenal, while Manchester City have four more points. The major difference: the goals scored.

Arsenal and Man City have scored over 40 times, while Newcastle have scored just 32. So Almirón’s newly discovered nose for goal alone is not enough.

Alexander Isak was supposed to play the role of the goalscorer. However, the former Dortmund player injured his thigh badly after three games and two goals. Newcastle have therefore had to do without the king transfer since the 9th matchday.

Substitute Callum Wilson, who was surprisingly not invited to the World Cup by England coach Gareth Soutgate, has scored six goals so far. But he doesn’t have the qualities of an Isak in top form by far.

The 23-year-old is expected back in a few weeks. Netzt Isak, as they did shortly after his arrival, are keen contenders for Newcastle to be among the top four teams in the Premier League at the end of the season – and perhaps they can seriously dream of the title.