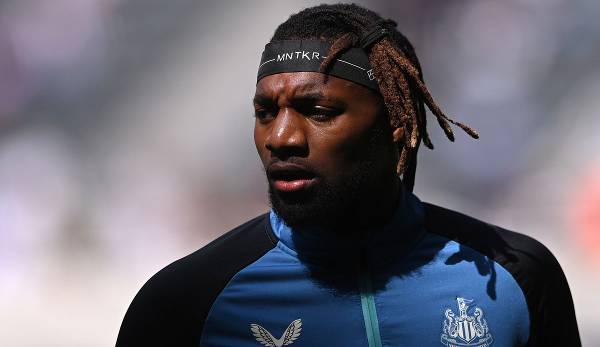 In the second part of the exclusive interview with GOAL and SPOX, Allan Saint-Maximin talks about his difficult year in Hanover, among other things.

In the summer of 2015, Allan Saint-Maximin, who was only 18 at the time and considered a top talent, was loaned out by AS Monaco to Hannover 96 for a year, but was unable to impress in the Bundesliga.

In the second part of the exclusive interview with SPOX and GOAL, the now 25-year-old French offensive player talks about this season at 96, as well as his critically viewed move to Newcastle United and his dream player for the Magpies. (HERE you can read the first part of the interview with Allan Saint-Maximin).

… his difficult 2015/16 loan year at Hannover 96 with just one goal in 18 appearances: “It was quite complicated there. Hannover wanted me to stay with them on loan for two years and I just wanted to do one year and then return to Monaco. The club’s results weren’t what I had hoped for. The club felt that we were going to be relegated to the 2nd division and did everything they could to sign me for another year.When I refused they told me I would not play again until the end of my loan.In short I had Years in which I didn’t get a chance. That changed when, after my return to Monaco, I made the decision to go back to Bastia on loan.”

… Criticism of his move to Newcastle in 2019, which many didn’t understand: “To be honest I had quite a lot of offers, even from big clubs from Italy, Spain and even England. But what I really needed was a club like Newcastle, who really wanted me and did everything for me to come. “I had very good discussions with the manager. I had a very good feeling. I didn’t want to have the same worries that I had before. I didn’t want to be one of many players. Newcastle made that possible for me and I was able to do it in the Premier League show everything I’ve shown so far. I chose not to leave Newcastle when I had the chance.”

… players he would like to have at Newcastle: “It’s a conversation that we will most likely have among the players, with the coach and with the investors. The coach has a clear vision of what he needs for his team. If I had to choose, my heart would speak. I would very likely want my friends to come to the club. I’m thinking of Ludovic Blas, for example. I like him a lot as a person and I like what he’s doing in Nantes. He scored a lot of goals. He’s an important one Part of the Nantes squad. I also know that Bruno (Guimaraes) is very fond of Lucas Paqueta (of Olympique Lyon).”

… his future dreams and a possible club to Newcastle (contract there until 2026): “To be honest, I don’t see any reason to leave Newcastle at the moment. Still, there are a lot of things that can change. Several big clubs have approached me about a move. But these are clubs that haven’t been looking for me , when I was in Nice. Newcastle came at a very important time in my career. They gave me a lot of confidence. I’m a very grateful person. That’s why I kept going even at times when things could get very complicated for the club , like last season (Newcastle finished 12th in the PL, ed.), decided not to go when I had the opportunity. I feel very comfortable here.”