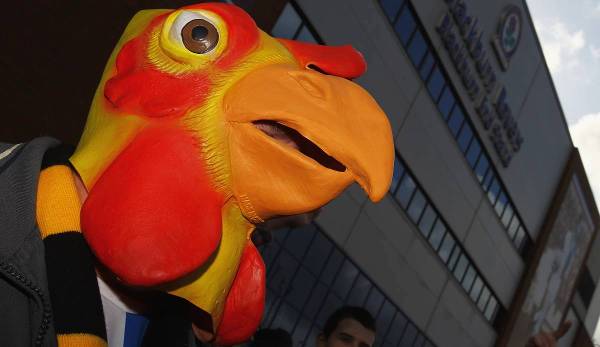 Former Bundesliga professional Jon Dahl Tomasson is the new coach of Blackburn Rovers. The club once had chickens running around the pitch, investors having snowballs thrown at them and coaches almost killed with cricket balls. What Tomasson wants there now and why it might be a good idea…

It was the usual blah blah blah. Jon Dahl Tomasson said he was “very proud and excited” to take over as Blackburn Rovers head coach on 14 June. Of course, the Dane also said that this is “a club with a lot of tradition, but also great ambitions”. What else can he say?

Tomasson then added: “The owners have a clear vision which is to develop players and become a sustainable Premier League club over time, so I’m delighted to be involved in this exciting new chapter for the club to be.”

At first glance, that seems normal if you didn’t know what the vision of the owners used to be and that this “vision” had caused what was perhaps the most toxic phase in the club’s 147-year history.

Blackburn Rovers were once a decently run Premier League club, funded by Jack Walker, who made a fortune in the steel industry with brother Fred and put a great deal of his money into the club, which, as the town’s son, he had owned since childhood so loved.

The investor didn’t know that you can relegate

He had Ewood Park rebuilt, financed new players, and once brought in a 21-year-old Alan Shearer, who shot the club to a sensational championship in 1995. Before his death in August 2020, Walker set up a trust company that would continue to fund the club should anything happen to him.

The Walker Trust held out until 2010, when an agency was commissioned to find an investor. The choice fell on the Indian one VH Group, until then completely unknown in the sport. But the company “survived” talks with both the Walker Trust and the Premier League, which ultimately had to approve the sale.

It was fatal that it was not noticed how little knowledge the entrepreneurs had about the subject. Long after the purchase of the rights, the bosses were completely surprised that the Premier League could also be relegated. They also realized far too late that it’s not a good idea to have a trainer fly out to India once a month to see how things are going.

The first official act was to dismiss Sam Allardyce as coach and talk about the Champions League. They hired a PR agency, which then circulated that they were interested in Ronaldinho. In an often depressed city, this caused quite a stir, but the rumor got around to their ears. Just like the speculation about Raul Gonzalez.

Blackburn Rovers: The police locked up the chicken runabouts

Because the reality was not the Champions League, but a relegation battle and relegation. With Venky’s, the Indian conglomerate, which mainly comprised companies from the poultry industry, had a poultry label that was very well known in India. The Blackburn players were hired to film commercials in which they had to eat fried chicken in the dressing room. What a picture.

Anger at investors’ amateurishness turned to anger at poultry. In May 2012, fans smuggled two chickens into the stadium, one of which was covered with a small Blackburn flag and sent onto the field. Goalkeeper Ali Al-Habsi, and defender Yakubu Ayegbeni eventually caught the chicken. Malicious gossips claimed that that season was the first time Al-Habsi captured something.

She also confirmed at the time an attack on manager Steve Dean with a cricket ball, just missing the hapless Rovers coach. A few months later, when the club owners paid a visit to Ewood Park, snowballs were thrown at them. Jitendra Desai, husband of Venky’s chairman Anuradha Desai, was hit in the face. It was their last visit, they stopped coming and only sent money.

Instead they hired a matchmaker in Shebby Singh to act as a bridge between Pune, where Venky’s headquarters were, and Blackburn as football boss. But Singh was caught shortly after his arrival taunting manager Steve Kean and calling Rovers legend Morten Gamst Pedersen a “pensioner”.

Rovers legend: ‘A bloody maggot, a piece of shit’

Singh had to issue a public apology, which was not enough for either the fans or the team. Especially not on the side where warhorses like Bradley Orr were targeting Singh.

Speaking on a podcast, the then-defender said he took on the Venky’s man: “I just said to him, ‘You’re a fucking maggot, a piece of shit. You said last week, ‘United we stand, divided we fall ‘ and now you’re in front of the camera, beating up two of our guys.”

Orr refrained from the fisticuffs, instead he was thrown out of the team: “I said: ‘You can’t get on the team bus, you can’t go near the changing room, you can’t go near the training ground because you’re not wanted’. And he was the director of football. He asked me, ‘How do I get to the game?’ And I said, ‘Get a cab because you’re not getting on that bus’.”

Singh, who died of a heart attack in January of this year, was still in charge for a while, firing Henning Berg after 57 days and Michael Appleton after 67 days. He never met the latter personally. In 2014 he went on vacation for three months and then never came back.

Blackburn Rovers: Everything got better with Tony Mowbray

It’s actually amazing that despite those wild years, Blackburn still survived in the Championship. Last year they were even on the verge of getting involved in the fight for promotion, but in the end they didn’t have the staying power for the difficult path to the Premier League.

Still, no one freaks out at Rovers or sends animals onto the field, because for years it’s at least got the impression that the people behind the scenes know what they’re doing. Tony Mowbray in particular was one of the most important figures in recent years. When he came Blackburn were even relegated to the 3rd division, but the experienced coach immediately took the club back to the second tier and has since built up a young squad.

The path from the youth academy to the professional team is more open than ever. Mowbray worked closely with Stuart Jones, who came on as head of the youth department in 2010, and constantly had the boys sent upstairs.

In the meantime, the system has proven itself so well that the club manages to lure more and more talented players into the youth department, even though they actually have a locational disadvantage. Manchester and Liverpool are not far away, so the top clubs can access them as they please. But Blackburn provides the perspective that if you’re good enough, you can go pro faster.

Jon Dahl Tomasson: He led Malmo to the Champions League

The phase of consolidation and stability is done, now the club apparently wants to take the next step. A step in which Mowbray’s skills as a development worker are apparently no longer in demand. It needed someone who had the urge to attack higher up and also knew how to do it.

Choosing Jon Dahl Tomasson is an exciting choice. The Dane, who once played for Feyenoord, Milan and Stuttgart, among others, has also made a name for himself as a coach. Two championship titles with Sweden’s top club Malmö, plus participation in the Champions League last season.

The latter in particular was not a matter of course. Malmö had to get rid of favored Rangers, who later faced Eintracht Frankfurt in the Europa League final, and Ludogorets to advance to the group stage.

Tomasson couldn’t believe his luck: “I was so proud of the lads. I won the Champions League and the UEFA Cup, I played in tournaments for Denmark, but it was one of the greatest moments of my career, the joy of the players , colleagues and fans.”

He finished the Malmö episode himself because he wanted to give himself time to look for a new task. There was speculation about interest from various clubs from England, Netherlands but Tomasson listened to everything. He says: “Every coach has their own way to go. It’s difficult to plan. You can’t plan it, so you jump on the bandwagon when it’s necessary.”

Jon Dahl Tomasson: At 18 he sat next to Foppe de Haan

He was an assistant at Vitesse and the Danish national team as well as head coach at Excelsior, Roda JC and in Malmö. Expectations are highest at Blackburn as promotion is expected in the medium term, but Tomasson doesn’t want to shake the club’s structure and wants to continue working with the young players. “We have a young team here and a great academy, I have a really good feeling about this club.”

In Malmö, more than 15 players in his Champions League squad were under 25, and the top performers were all below this limit. So why not here too? He learned how to deal with young players from Foppe de Haan, his first coach at Heerenveen, when Tomasson left Denmark at just 18 to settle in the Netherlands.

De Haan took the teenager, who didn’t speak a word of Dutch, to the games and got help with scouting: “He did it so that I could learn the language, but also to get in touch with me and to introduce me to Dutch football show. I was surprised, but it worked out and we developed a relationship.”

Tomasson could never forget Foppe’s influence and had young players prepare presentations in Malmö and tell the youngsters how the team should behave tactically in the next game and suggest solutions. Tomasson says: “The best players in the world are the ones who make the best decisions at the right moment.”

He himself has also learned from the greatest. “I had a lot of great coaches during my football career like Carlo Ancelotti, Manuel Pellegrini, Bert van Marwijk, Leo Beenhakker. All these coaches give you inspiration.” Now it is his turn and should inspire.