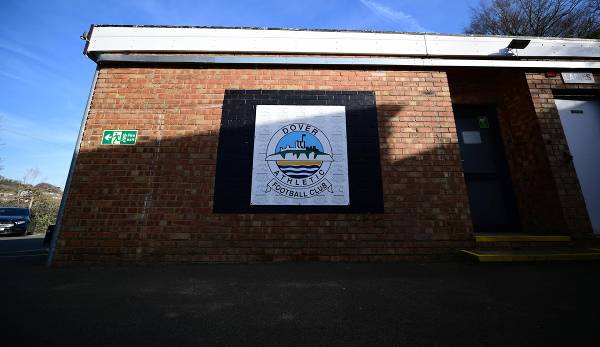 If a team only gets one point from 44 games, it looks more than bitter in the table. But at Dover Athletic there is more to it than that.

Travel professionals should definitely be able to do something with Dover, too famous is the ferry connection between the English city and the French port of Calais. The Strait of Dover is the narrowest part of the English Channel, the strait between Great Britain and continental Europe.

But this year Dover is also making headlines in other ways, negative ones to be precise, because the Dover Athletic football team there is at first glance one of the worst (semi-)professional teams in Europe. But one after anonther.

Dover Athletic Football Club plays in the National League, the fifth division in England. The team has had a remarkable season. In many ways, because the one point from 44 games in the final table reads worse than the season ended up being.

The club was hit hard by the Corona pandemic, it has a lack of income from spectators in common with all other clubs, but the city and with it some of the sponsors suffered a lot from the fact that travel and tourism were severely restricted. Brexit did the rest, there was a lack of money everywhere.

Dover Athletic have to withdraw from the game

In the course of the past season, the club had to pull the ripcord and stop playing shortly after the winter, also because the promised financial support from the state did not materialize. “We would have had to borrow between £500,000 and £1m to keep playing,” a club official shared with Jim Parmenter ESPN. “I wasn’t ready for that because I’ve worked hard for 16 years to get the club into a good financial position.”

The withdrawal was certainly not without consequences, in addition to a penalty of 40,000 pounds (around 46,000 euros) you got a point deduction of twelve points for the new season. “They couldn’t relegate us as all the leagues among us have already been canceled due to the pandemic.”

So Dover Athletic remained fifth division, but could not keep up financially in the new season either. “The season could only go haywire,” continued Parmenter. While their own players only earn between £250 and £600 a week, there are clubs where they get paid six times as much. “Wrexham, for example, brought in a player for £300,000, plus he got £200,000 for the signing and he’s making £4,000 a week. We just can’t compete.”

The first half of the season went accordingly. From the end of September 2021 to the end of January 2022, none of the 25 games of the season were won. Counting the time after the previous season’s suspension, Dover Athletic went 364 days without a win before beating Eastleigh 1-0 in front of 486 spectators on Tuesday night.

A liberation for players and fans, logical in such a negative series. Many a supporter took it with humor before, wearing shirts that read, “I’ve seen Dover win before!” Even the footballers themselves had their doubts, although many of them, apart from the loan players from higher classes, only play the sport alongside work.

Dover Athletic wanted to end the season on a positive score

Back-up goalkeeper Alexis Andre Jr., for example, makes his living as a model with a large number of followers on Instagram and TikTok. Some others are teachers or work in construction. Slightly more offbeat, defender Sam Wood made money off football, having already been booked as Lionel Messi’s body double in commercials.

But even after the redeeming victory, the team still had a big goal in mind. “We’re down five points now, let’s get on the plus side, we want to do that,” said coach Andy Hessenthaler. “At the end of the season we want to be in the positive range of points!”

In the course of the second half of the season, a second win was added and so Dover Athletic ended the season after deducting twelve points in the final accounts with one point from 44 games. At second glance and under the circumstances mentioned, it was a conciliatory ending.