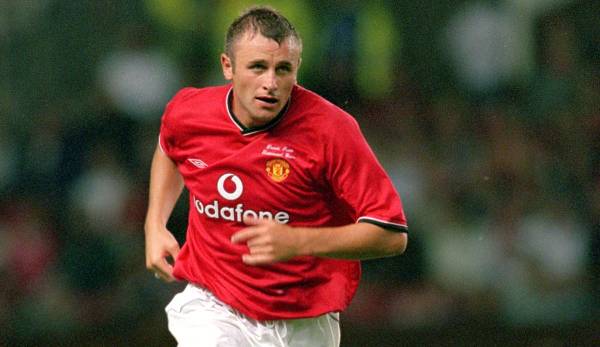 Ronnie Wallwork wins the championship with the Red Devils, then things quickly go downhill. He was finally sentenced to two years probation.

Ronnie Wallwork is not a name that many young football fans are familiar with, but he could easily have been mentioned in the same breath as Manchester United legends David Beckham, Paul Scholes and Ryan Giggs – if various things in the Englishman’s life had gone differently.

In March 2021, Wallwork was sentenced to two years in prison for aggravated assault, suspended for 18 months. In addition, the court gave him 200 hours of community service. So he was a free man as long as he stayed out of trouble until September 2022 – which he did.

On Christmas 2019, Wallwork and his boyfriend Dave Gardner had taken on a man they knew at a bar in east Manchester. As pictures of the incident show, the men argued about which of them owns the better sneakers. The dispute escalated. Wallwork and Gardner went after the victim, who was later taken to the hospital with a broken eye socket and lacerations to the face. It was the sad high point in the life of Ronnie Wallwork, who once faced a great career as a footballer.

Wallwork joined Manchester United’s youth academy in 1993 at the age of 16. It wasn’t long before the midfielder was prophesied for great success at Old Trafford, especially after being voted Young Player of the Year in 1996. In 1997 he was an integral part of the England U20 team at the World Cup in Argentina. Although he didn’t make the leap into the Premier League team for the Red Devils, he made twelve appearances in the 2000/01 season and was therefore awarded the championship medal.

His first negative appearance came when he was handed a lifetime ban from professional football while on loan at Royal Antwerp in 1999 for grabbing referee Amand Ancion’s neck after a play-off defeat by La Louviere.

Then United manager Sir Alex Ferguson was outraged by the verdict and vowed to act against the suspension. Six months later, a Belgian court reduced that to three years, two of which were suspended. It was also decided that the final year of suspension would only apply to Belgium, allowing Wallwork to return to United and take part in the 1999/2000 season.

In 2002, Wallwork moved to West Bromwich Albion. “Ronnie is the best Bosman signing of the summer,” Ferguson gushed at the time. “He was a great player at Old Trafford but it was unfortunate that he never had a permanent position,” Ferguson continued.

Wallwork played regularly in his first year with the Hawthorns but after the club’s relegation he was loaned out to Bradford City in the 2003/04 season. However, he returned the following season and was voted West Brom’s Player of the Year. However, under Tony Mowbray, he lost his regular starting XI spot before falling victim to a horrific attack that nearly took his life.

Wallwork after stabbing in hospital

On November 30, 2006, Wallwork was with his girlfriend Amy Broadbent at the Sugar Club nightclub when he was stabbed seven times with a fish knife by Broadbent’s former boyfriend Robert Rimmer. Wallwork spent 10 days in hospital being treated for wounds to his hand, back and stomach, but his injuries kept him out of action for another 10 weeks.

“I’m lucky to be alive. I have scar tissue on my abdomen where they operated on me, which still hurts a bit,” Wallwork said in early 2007 BBC Radio Five Live.

Although he made a full recovery and made his comeback in a reserve game on 21 February 2007, he was never to play for West Brom’s first-team again. He joined League One side Huddersfield at the start of the 2007/08 season, but the former England Under-20 international was soon left without a club after failing to secure a long-term contract after a brief stint with Sheffield Wednesday.

“One minute I was West Brom Player of the Year, the next I was out of the team and then out of the club,” Wallwork later lamented. “Things can change very quickly in football, that’s part of the game.”

In 2011, Wallwork made headlines again when he was charged with three counts of dealing in stolen cars. He pleaded guilty and was sentenced to 15 months in prison.

According to his lawyer at the time, Wallwork was struggling with life after football and his legal representative noted that the former midfielder’s career had been ‘tragically curtailed’ by the stabbing.

In 2014 he got into trouble again and was again convicted of infidelity. He also received a police warning in 2005 for assault.

At last year’s court hearing, Wallwork was described as “heavy in debt,” a person drifting through life with no real direction and struggling to survive so badly that he was forced to sell his house.