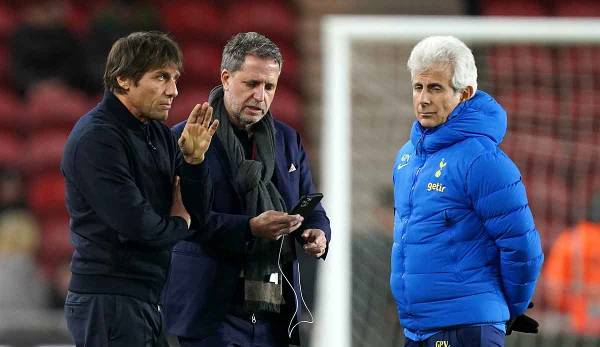 Tottenham Hotspur strengthened their team wisely in the previous transfer window – and quite unusually early on. Sports director Fabio Paratici and coach Antonio Conte triggered euphoria in north London, fueled by a financial injection from the club owners.

Fabio Paratici has been Tottenham Hotspur’s “Managing Director of Football” since last summer, in Germany the post would be called Sports Director. The 50-year-old Italian works for a club where he probably would not have ended up as an active player under the reign of President Daniel Levy.

On the one hand, of course, this is due to the fact that the former midfielder played at best in the third-rate Italian Serie C during his active career in the 90s and early 00s. But certainly also because Paratici always made all his club changes – and there were quite a few – at the beginning of a transfer period. Paratici likes to get things done early, which sets him apart from his boss.

Since taking office in 2001, Levy has built a reputation as a relentless transfer negotiator and a proven last-minute expert. If it lasts until just before midnight on the last transfer day, the transfer will only then be completed. In the summer of 2017, for example, Tottenham signed all five of their newcomers in the final week of the transfer window. And if Levy doesn’t like the conditions, then no one will come. In 2018, Tottenham became the first Premier League club in history not to sign a single player in a summer transfer window.

From an economic and rational point of view, this approach may be justified, but at the same time it is problematic in the reality of football. Tottenham’s respective coaches usually only knew at the end of the transfer period with which team they would contest the upcoming season. In addition, late signings could not get used to their new environment during the preparations.

Now everything is different! It’s only mid-July, but coach Antonio Conte already has six newcomers available. The team was sensibly strengthened in all positions at an early stage. Clement Lenglet (27) came on loan from FC Barcelona for defense, Yves Bissouma (25) for midfield for 29.2 million euros from Brighton & Hove Albion, for the storm the extremely courted Richarlison (25) for 58 million euros from Everton FC. In addition, the free transfer Ivan Perisic (33) and reserve goalkeeper Fraser Forster (34) complemented the squad.

The transfer offensive bears the signature of Paratici, only the third classic sports director in the club’s history. Damien Comolli filled this role from 2005 to 2008, and Franco Baldini from 2013 to 2015. Before, in between and after – as with so many other Premier League clubs – President Levy took care of the transfer business in cooperation with the respective coaches, who are not called “managers” in England for nothing.

Paratici and Conte: Reunion at Tottenham

Last summer, Levy finally saw a need for a new sports director and brought in Paratici, an extremely experienced representative of his guild. After the end of his career, he first gained experience at Sampdoria Genoa, in 2010 he finally switched to Juventus Turin.

There, Paratici became an expert in free transfers, even before they became an international trend as a result of the corona pandemic. He once lured Andrea Pirlo and Paul Pogba to Turin without a fee, and later also Aaron Ramsey, Adrien Rabiot and Emre Can. Naturally, they were always available at the start of training. Together with General Director Giuseppe Marotta, Paratici built a team that, after a dry spell of years, became the Italian series champion.

Juve won the first three Scudetti under coach Antonio Conte. He then moved to the Italian national team before Conte led Chelsea and Inter Milan to surprise league titles. After Nuno Espirito Santo was sacked last November, his old companion Paratici brought him to Tottenham, where they are now tasked with ending the title drought that has lasted since a League Cup in 2008.

Despite an interim low and emotionally expressed thoughts of retiring in winter, Conte led Tottenham back into the Champions League in his first half of the season after a two-year absence. This was made possible by a remarkable race to catch up with local rivals FC Arsenal, including a 3-0 win in a direct duel shortly before the end of the season. Conte sparked a euphoria about Tottenham that has probably not been seen since the successful years under Mauricio Pochettino.

Paratici’s clever approach to the winter transfer market also played a large part in the successful second half of the season. He gave up the previously disappointing Tanguy Ndombele, Bryan Gil, Dele Alli and Giovani Lo Celso in favor of Rodrigo Bentancur (26) and Dejan Kulusvski (22) from his former club Juventus. Both hit the ground running: Bentancur structured the midfield, while Kulusevski made excellent combinations up front with Harry Kane and Heung-Min Son, who had worked together for years.

After Kane had considered a move to Manchester City last summer, he does not seem to be looking to leave because of the positive developments at his youth club, despite an alleged interest from FC Bayern Munich. In general, Tottenham are unlikely to lose a key player this summer. So far only Steven Bergwijn and loan returnees have been released, Harry Winks and the last loaned Ndombele could follow.

Instead, the team is to be strengthened with other newcomers: there is reportedly interest in defender Josko Gvardiol from RB Leipzig and striker Memphis Depay from FC Barcelona. This transfer offensive is made possible by a financial injection from the investment company ENIC, which has owned a majority of the club since 2001 and controls it via President Levy. ENIC made the equivalent of around 176 million euros available to Tottenham this summer. It is the first time in the years immediately following the takeover that the company has actively invested in the club.