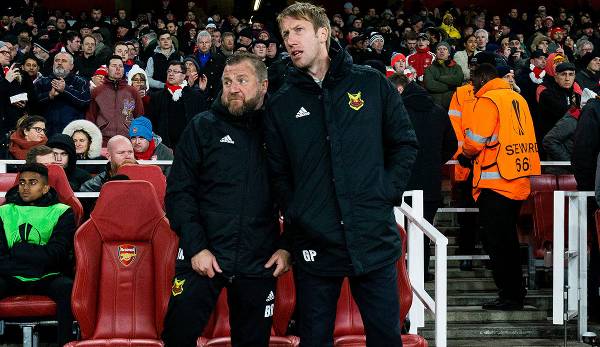 Graham Potter is top favorite to succeed Thomas Tuchel at Chelsea. In professional circles, the 47-year-old Brighton & Hove Albion coach is considered the best English coach. He has performed two miracles so far – but Potter must not underestimate the task in Chelsea, because there are dangers lurking.

After the dismissal of Thomas Tuchel at Chelsea FC, the same names are circulating as always. Zinedine Zidane, of course. Mauricio Pochettino, anyway. But Chelsea FC seems to have a completely different idea. Contrary to all expectations, the new club management does not want to rely on a glamorous name, but on a brilliant idea: Graham Potter, 47, coach of Brighton & Holve Albion. There are good reasons for that…

Because Potter is the epitome of modern coaching. What he created at Swedish club Ostersunds FK and in Brighton has long gone under the radar in the footballing world. It is all the more remarkable that the new bosses of Chelsea FC apparently have good informants who have pointed out Potter’s marvels – there is no other way to describe it.

The Englishman’s rise began in Sweden’s 4th division. With Ostersunds FK he managed within five seasons promotion to the top flight. After winning the 2016/17 Swedish Cup which qualified for the 2017/18 Europa League, Ostersunds eliminated Galatasaray and PAOK in qualifying, made it to the group stage, qualified from a group with Hertha BSC, Athletic Bilbao and Zorya for the knockout round.

That was the end of the game against Arsenal – despite a sensational victory in London, for which Potter and his troupe were celebrated even by Arsenal fans. All this with a squad mostly put together in the second division. But Potter never played the underdog, he rigorously followed his ball possession football – even when they won the Emirates, Ostersunds had more ball possession in the end. But more on that later.

At the latest in the duels against Arsenal, Potter, who had had no experience as a head coach before his time in Sweden, ended up in the focus of the coaching scouts. First he was able to prove his skills in the championship at Swansea City and did a very decent job in Wales, but the real accolade came with the nomination as Premier League coach in Brighton.

In the port city, he managed to build a team capable of dominating the game even against supposedly stronger opponents. Although he had more funds at his disposal compared to the time in Ostersund, he did not throw money down the window in England either and stayed below the league average in terms of spending. He focused on improving the existing player base, which he did impressively. Marc Cucurella says hello.

His predecessor, Chris Hughton, breathed a different identity into Brighton with the archetypally British 4-4-2. Potter broke tradition and gave his squad a tactical flexibility that, at its core, retains the same principles: playing from behind, breaking through opposing lines, and consistently having strong positional play in the opposing half.

Tactically flexible, but with a basic idea

Potter strives to make the best use of the player profiles available to him and to develop a structure for playmaking, positional play and pressing when the ball is with the opponent depending on the opponent’s tactics.

Potter is notorious for changing formations during and between games, and yet his teams never feel like they have to adjust to anything new. The basic idea remains: he wants to dominate every game first and foremost, but he isn’t obsessed with possession and his teams are capable of throwing opponents off guard with quick counterattacks that usually seem well planned.

That Potter is able to develop teams and take them to a higher level, he proved in the Europa League with a Swedish team from the second who played excellent football, not parked the bus in front of the goal and on one free kick waited because the opponents had more quality. But also with the spectacular football he lets play in Brighton and has established them as a permanent team in the Premier League, which you don’t like to play against. Erik ten Hag can sing a song about it.

The big question will be whether Potter is the right man for Chelsea. Not every great coach suits an excellent club and an excellent team. At least, should Potter take the job, he’s taking on a crew that knows how to work under a passionate developer, because Thomas Tuchel was nothing more than that.

The experience from Dortmund and Paris did not help Thomas Tuchel

But the German had experience from Dortmund or Paris, knew that there were different currents in these big clubs and that he had to pacify them if he wanted to work in peace. And even with this experience, Tuchel had problems with it and ultimately didn’t fail in sport, but – if you read between the lines – more because of the atmospheric disturbances in the club.

Potter doesn’t have that experience – of course there’s politics at the club in Brighton too and it’s not like a county court with a nice groundskeeper either, but Chelsea are a different caliber. Antonio Conte, Maurizio Sarri, club legend Frank Lampard and Thomas Tuchel have worked here for the past five years. In peace nobody went. So Potter would have to prepare for a whole new component of being a trainer.

Connoisseurs say that he is a great communicator who captivates players and does not complicate his job of overloading the team with information they do not need. But it is also clear that he was the star in Ostersunds and in Brighton – everyone looked up to him and he could do as he pleased. People listened to him and believed him. In Chelsea he would no longer be the star. Can he continue to make everyone look up to him and listen to him?

There is no doubting the Graham Potter’s skill. He is the best English football coach and even at the English Football Association he is said to have long been in the narrow circle as a possible successor to Gareth Southgate should he ever leave. But the Chelsea world is complicated and unpredictable. At least it’s clear why the US bosses are getting him. Potter stands for attractiveness, for a beautiful game. Or as they would say: entertainment. As long as he entertains her, he will have nothing to fear.