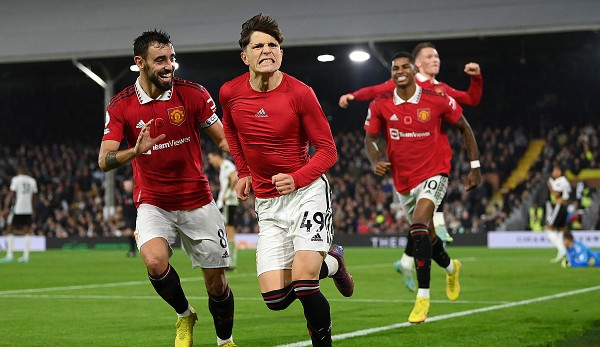 Alejandro Garnacho is already celebrating like his role model Cristiano Ronaldo and could soon inherit him at Manchester United.

With incredible speed, Alejandro Garnacho swept into Fulham’s penalty area from the left, put the ball in the bottom right-hand corner and scored the last-minute winner for Manchester United’s three points at Craven Cottage. “There’s something about him, there’s no doubt about that. His bad attitude or not, he can play,” said United legend Gary Neville when he signed for Sky Sports commented on the game.

“I remember a goal from Cristiano Ronaldo, who won a game for Manchester United many, many years ago, but not as late as this,” continued Neville.

That 2007 goal, in which Ronaldo smashed a perfectly placed shot into the net after a brilliant run down the left wing, marked the completion of his development from talented prodigy to global superstar.

However, Garnacho’s equally terrific performance on Sunday is only his first act. At 18, the Argentina junior international is still in the process of shedding talent status. United’s coach Erik ten Hag is clear: Garnacho must “keep his feet on the ground”.

However, having Ronaldo as his role model could hinder this process and harm his development. Garnacho should have woken up on Monday morning to see his name on the front pages, but his celebrity team-mate stole the limelight from him.

Cristiano Ronaldo shouldn’t be a role model for Garnacho

The 37-year-old, in a scandalous interview with Piers Morgan, said he felt “betrayed” by United for trying to oust him from the club in the summer and admitted, among a series of other explosive revelations, that he doesn’t respect Ten Hag . The club is now expected to crack down on Ronaldo with United reportedly planning to sue CR7.

Not only did Ronaldo sully his legacy with this outburst, he also ruined Garnacho’s breakthrough. Once again, the Portuguese striker took center stage, which was sort of the motto of his second stint at Old Trafford.

There is likely to be more than a hefty financial penalty for the famous No. 7. United must make an example of Ronaldo and sell him once the January transfer window opens. His prime is long past, but Garnacho still has his whole career ahead of him.

It’s time for United to focus on the future with a new teenage prodigy as a fixture.

Comparisons between Garnacho and Ronaldo are obvious as the youngster possesses the same explosive speed and dribbling prowess as the five-time Ballon d’Or winner in his heyday, and also seems to have a similar arrogant streak.

“I think everyone sees his talent and that he can do it,” said Fernandes after the game. “Not because of his goals and assists, but because of the way he comes into play. Nobody likes to sit outside and the attitude he shows when he comes off the bench is fantastic. He’s got it Deserving chances he’s been given and rewarding himself. That’s what football is about.”

Garnacho has earned his place in Manchester United’s starting XI

Garnacho has scored two goals and three assists in eight games in the 2022/23 season, starting just three times, and it is becoming increasingly difficult for Ten Hag to leave him on the bench.

The U20 international was certainly disappointed not to make Argentina’s World Cup squad but he responded with a strong display. He was there when United needed a moment of inspiration and he deserved the chance to make an even bigger contribution in the second half of the season. Ronaldo’s departure would free up a spot for him.

Ten Hag’s job now is to ensure Garnacho breaks through this season so he can establish himself as a key player in his long-term future at Old Trafford.

For his part, Garnacho, who joined Manchester in 2020 for just under €500,000 from Atlético Madrid’s youth team, needs to keep his head down and continue to hone his game. Ronaldo was once the best example of a player who always strived for improvement and pushed himself to new heights. Meanwhile, he is no longer a suitable role model for Garnacho.

The winger stripped off his jersey after scoring the winner against Fulham and presented his name to away fans. In doing so, he mimicked Lionel Messi’s iconic gesture after he scored for Barcelona in a 3-2 win over Real Madrid in 2017.

If he continues as he has been, Garnacho will soon have a chance to play alongside the Argentine legend at international level. He would do well to follow Messi’s example off the pitch rather than Ronaldo’s.