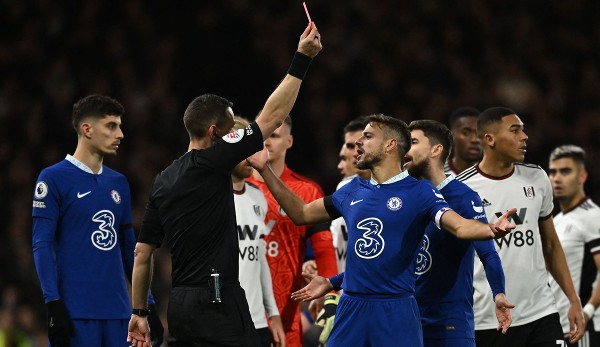 João Félix’s debut for Chelsea and the Premier League went horribly wrong. He has some fellow sufferers!

When it comes to making a debut in the Premier League, even experienced footballers can get nervous.

The intensity of the league, the fans’ expectations of the new star, the spiteful face of social media: all of this can weigh heavily on a player’s shoulders.

England’s top flight has seen many a terrible debut over the years. And as Chelsea newcomer João Félix makes his nightmare debut on Thursday, we look at the 11 worst debuts in Premier League history.

His debut began and ended in controversy, and João Félix’s first game for Chelsea will not be forgotten in a hurry.

The 23-year-old was brought in on loan from Atletico Madrid as the club’s injury list grew. And it was precisely this lack of offensive power that meant he was allowed to start just one day after signing against Fulham.

After a first half that featured some brilliant moments – including a clever leg shot for Tim Ream in the early minutes – the second half turned into a disaster.

Spurred on by Chelsea’s equalizer just after the break, Félix attacked Fulham right-back Kenny Tete and was penalized by referee David Coote with a red card.

All in all, that was less than 58 minutes of Premier League football for the Portuguese, who will now also miss the next three games due to the mandatory red suspension.

Saúl’s first game for Chelsea was a taste of what his brief stay in London would be like.

The Spaniard, on loan from Atlético Madrid in 2021, made his first Premier League appearance against Aston Villa.

However, his performance was so unfortunate that then-coach Thomas Tuchel substituted him at half-time. Bad passes were the topic of the day for Saúl and one Chelsea fan described his performance as “rubbish”. A warm welcome to the Premier League, then.

At the end of his United tenure, few thought about Evra’s poor Premier League debut.

The Frenchman quickly established himself as one of the most consistent players in the league, winning trophy after trophy in eight years at Old Trafford.

Few would have predicted that after his debut. In the Manchester derby loss to City, Evra was so devastated that he later said he threw up before kick-off.

A pre-game meal of pasta and beans and a lack of experience playing lunchtime games proved to be a recipe for disaster.

However, Evra quickly adjusted to life in the Premier League afterwards, putting his questionable debut behind him.

There’s not much worse than receiving a red card on your debut. But that was the humiliation Gervinho suffered on his first outing as an Arsenal player.

To be fair, most would forgive a newbie for letting Joey Barton tease him. The Newcastle midfielder and the Arsenal debutant got into a tussle in which Gervinho caught Barton with his right arm.

That went down immediately – and Gervinho was sent off.

If any Premier League footballer suffers from impostor syndrome, all they have to do is watch footage of Ali Dia’s debut for Southampton in 1996.

The Senegalese forward was recommended to Saints boss Graeme Souness by someone pretending to be George Weah.

Southampton decided to bank on the relatively unknown striker and offered him a month’s contract – believing he had previously excelled at PSG and for the Senegalese national team.

Neither had he done and when he made his debut against Leeds Dia was hopelessly overwhelmed. Souness pulled him off before the break and he was never seen again.

Another Arsenal debutant who proved overzealous and was sent off.

Laurent Koscielny was initially stretchered on his Premier League debut against Liverpool but recovered quickly and continued playing.

Shortly afterwards he had to leave the field after all because he saw a yellow-red card for a hasty foul.

What’s wrong with Arsenal players getting sent off on their debuts?

The eccentric Frimpong, like Koscielny, picked up two yellow cards on his first Premier League appearance, also coincidentally against Liverpool.

Arsenal lost 2-0 in the middle of one of Arsene Wenger’s most difficult periods as manager of the club.

“Who?” you might ask now. Even Watford fans have a hard time remembering Dimitri Foulquier.

The Hornets seem to have an endless merry-go-round of players and the France right-back was gone before he could even make an impression.

And Foulquier was ruled out after just 33 minutes, down 0-5. So not a good start.

That was the impression Premier League fans had of Thiago Silva ahead of his 2020 move to Chelsea. And he was right.

Still, the centre-back seemed completely unprepared for the ferocity of his first Premier League game. He was completely off the mark as West Brom ripped the Blues apart and led 3-0 at the break.

However, that humiliation seemed to do nothing more than refocus on Silva, who has been on his best behavior ever since.

Before the money came, Manchester City’s most eye-catching signings were usually slick buys for just over €1m.

Back in 2001, the arrival of midfielder Christian Negouai, hailed by manager Kevin Keegan, was met with some expectations.

But his Premier League debut lasted just three minutes. A dangerous foul on Everton’s Marcus Bent resulted in a red card and Negouai never played in the top flight again.

The dominant theme of this list is that a debut dismissal is an undesirable but oddly common occurrence.

Garry Flitcroft’s red card was perhaps the worst of them all, largely because of whoever was on the other side.

The young midfielder had elbowed Duncan Ferguson of all people just minutes after making his Premier League debut for Blackburn.

Luckily Ferguson was in a forgiving mood and Flitcroft escaped with his life.