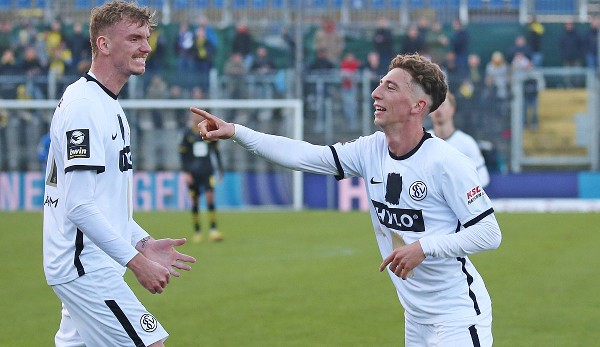 Jannik Rochelt is currently causing a sensation with SV Elversberg in the 3rd division. The promoted team is unchallenged at the top of the table and the offensive player made a major contribution as the top scorer in the league (15 goals). In an interview with SPOX and GOAL, the 24-year-old looks back on his time in Saarland, among other things.

In addition, Rochelt, who was still playing in FC Memmingen’s youth team when he was 18, talks about his turbulent time at FC Bayern – including promotion to the 3rd division, the championship there and the disappointing last six months in terms of sport, in which it was ” was personally difficult” to “deal with it”.

Mr Rochelt, eight months ago you were still playing with Ulm in the regional league, now you are in first place in the 3rd division with SV Elversberg, you are the top scorer in the league and you beat Leverkusen in the DFB Cup. How did you experience the last half round?

Jannik Rochelt: It was, of course, incredibly eventful. It was crazy how well we started the season with the 5-1 win in Essen in front of a sensational crowd and the aforementioned game against Leverkusen, in which we took our small chance and played a great game and then we deserved one round progressed. I couldn’t have been accepted better into the team.

In an interview in September you said that staying up in the league is still the goal, now the SVE has an unbelievable 41 points and is already ten points ahead of a non-promotional place. To what extent have the goals been adjusted internally?

Rochelt: Normally, we should have achieved our primary goal – avoiding relegation – but we haven’t talked about a new target yet. Knowing the coaching team and those responsible, nothing will change. We just want to keep training well, start the upcoming games in the best possible way and continue to play the dominant football that we’ve shown so far.

It is noticeable that Elversberg is not typical of a promoter, so: no walls, instead attractive and courageous football, which was shown in 4-1 victories against 1860 Munich or Osnabrück, among other things. Why were there no adjustment difficulties at all in the 3rd division?

Rochelt: This game idea has distinguished the SVE for a few years. From my first day you could tell that we had the quality in the squad to be able to implement this plan one league higher. Of course you have to adapt to your opponent to a certain extent, but the most important thing is to stay true to your own style.

It was also excellent for you personally: 15 points in 17 league games and two in the cup coup against Leverkusen. How do you explain that, having previously only had five goals in 24 third division games?

Rochelt: In the third division games with FC Bayern, you have to say that there were a few substitutions and short appearances. I would have wished it had been different back then, but above all it was important that I never stopped working on my game and believing in myself. In previous years, more goals would have been possible, which is why I’m glad that I’ve found my nose for goals again.

When you look at your CV, you notice that you didn’t take a classic path through the youth academy of a big club. At 18 you were still playing in the FC Memmingen youth team before moving on to the senior men’s team. How do you look back on your youth?

Rochelt: The dream of becoming a professional footballer has existed since I was a child, which is why I switched to Friedrichshafen and later to Memmingen when I was a junior – the top-class clubs in my region. The older you get, the more you have to think about what happens after school. That’s why I completed my banking training and prepared myself for normal working life. I also continued to play football in the regional league. In retrospect, that was exactly the case: I was able to grow up more or less in the familiar environment and had my buddies around me.

FC Bayern: “The contrast to Memmingen was brutal”

But then things happened quickly: From the second half of 2018 you were a permanent fixture in the first team of FC Memmingen in the regional league, and a year later FC Bayern knocked on the door. How did that go?

Rochelt: I agree. Things were going really well in Memmingen and then FC Bayern made the offer. I went to Munich with my parents and my advisor, we looked at everything and spoke to Holger Seitz and Dirk Teschke, the coaches of the second team, on campus. It was all very impressive, nothing was missing there and the contrast to Memmingen was brutal. We then thought for a few days whether this step made sense, but in the end it was clear: the timing is perfect, after completing my training I was able to focus fully on football.

Shortly after signing, we went to the training camp with the amateurs in Dallas, USA…

Rochelt: It was crazy what was going on in such a short time. I flew to Dallas alone because the guys were already there. I had never been to America before, didn’t really know what to expect and didn’t really know any of the new colleagues. To train next to the pros on Säbener Straße and to experience them up close, and to be able to train with them from time to time – really awesome.

How close was the exchange with the professionals?

Rochelt: We usually trained at the same time so that players from our team could step in directly if something happened to the pros or if someone got injured. There were four to five players who trained very regularly during the week and others who were occasionally allowed to get a taste of things, for example during the international breaks. The guys were all really nice and there was no airs and graces. Like all of us, they just wanted to play football.

Alphonso Davies? “There can be no two opinions”

The first highlight was certainly promotion to the 3rd division the following summer, when you played a decisive part in the second leg of the promotion game in a 4-1 win over VfL Wolfsburg II with two goals…

Rochelt: That was definitely a huge highlight. The championship in the Regionalliga Bayern was cool, but it was clear to everyone that we would only really achieve something two games later. We lost the first leg 3-1, I was substituted on and felt good, in the second leg in front of a great backdrop on Grünwalder Straße – we didn’t know that – I was allowed to play from the start. Then there was the course of the game: after the early 0:1 we felt we were already gone, the race to catch up and the personal involvement made it all the better.

What many people no longer know: A certain Alphonso Davies was also on the pitch in the two promotion games (previously three regional league games). How did you experience him?

Rochelt: He was totally correct in his dealings and got along well with everyone. Of course, his athleticism and speed were outstanding, it was obvious that he had that certain something. There can be no two opinions that he is right where he is now.

You played with a lot of talents in Munich? Which ones stand out for you?

Rochelt: What was striking about us in the team was that many managed to take the next step – be it Otschi Wriedt, who is currently in Kiel, or Woo-yeong Jeong, who plays a good role at Freiburg. Whether it’s enough for a professional career or not depends on an extremely large number of factors: injuries, mental issues, whether the coach’s playing style fits. A career cannot always be planned.

In the 3rd league, then under the new coach Sebastian Hoeneß, they were still regularly in the starting lineup in the beginning, in the second half of the season the playing times were quite manageable. How did this development present itself to you?

Rochelt: The first six months were consistently positive and really nice. The start was also good in the 3rd division under the new coach, I played a lot, although due to injuries at first I was in an unfamiliar position as a right-back. I didn’t really feel comfortable there because I clearly see my strengths on the offensive. After four games I was allowed to play in my usual offensive position again and made a few appearances. I was thrown back a little bit by illnesses and minor injuries, and in the course of the second half of the season things didn’t work out as I had hoped.

The season was completed as a climber with the third division championship. How was the success perceived internally – even with a crying eye, since promotion to the 2nd division was not possible?

Rochelt: I do think it makes a difference whether you’re promoted with a second team or a first team. The fluctuation in the squad is simply much greater there. But nobody can take away what we have achieved, especially since the first half of the season was quite turbulent. Of course it would be cool if promotion were also possible, but I think it’s good the way it is, so that the places in the second division don’t eventually go to the secondary representation of the big clubs, who regularly show their greatest talents there insert.

Rochelt: “I’m happy about the time in Munich”

Your situation did not improve in the 2020/21 preliminary round either. You were only in the starting XI once…

Rochelt: After another change of coach (back from Hoeneß to Seitz, editor’s note), the structure on campus has changed a bit, there has been a greater focus on even younger players. These should show up. But I also have to say that I didn’t show my best performances in this phase because I was struggling with the situation. It was personally difficult to deal with. I didn’t know that, it was a new experience. Nevertheless, I am happy about the time in Munich. Looking back, that shaped me.

After moving to Ulm during the winter break, the team went downhill. At the end of the season you were 18th and relegated to the regional league, where you are currently in 6th place far behind the top teams. How have you followed the development?

Rochelt: If you look at this year’s team, they are all very young players. The step out of youth is demanding, but these experiences are enormously important for further development.

After a year and a half in Ulm in the regional league, where you had to admit defeat to your current club Elversberg in the promotion race, you are now back in the 3rd division, still only 24 years old. So did everything go well or do you regret the decision to leave FC Bayern before the end of your contract?

Rochelt: I’m absolutely satisfied, everything made sense and I’m very happy here in Elversberg. I hope that it will continue to be so much fun and that the results will be good. At the same time, I am also completing a distance learning course in business administration. I use the time that you have on the side to have a degree under my belt, but the very clear focus is initially on sports.