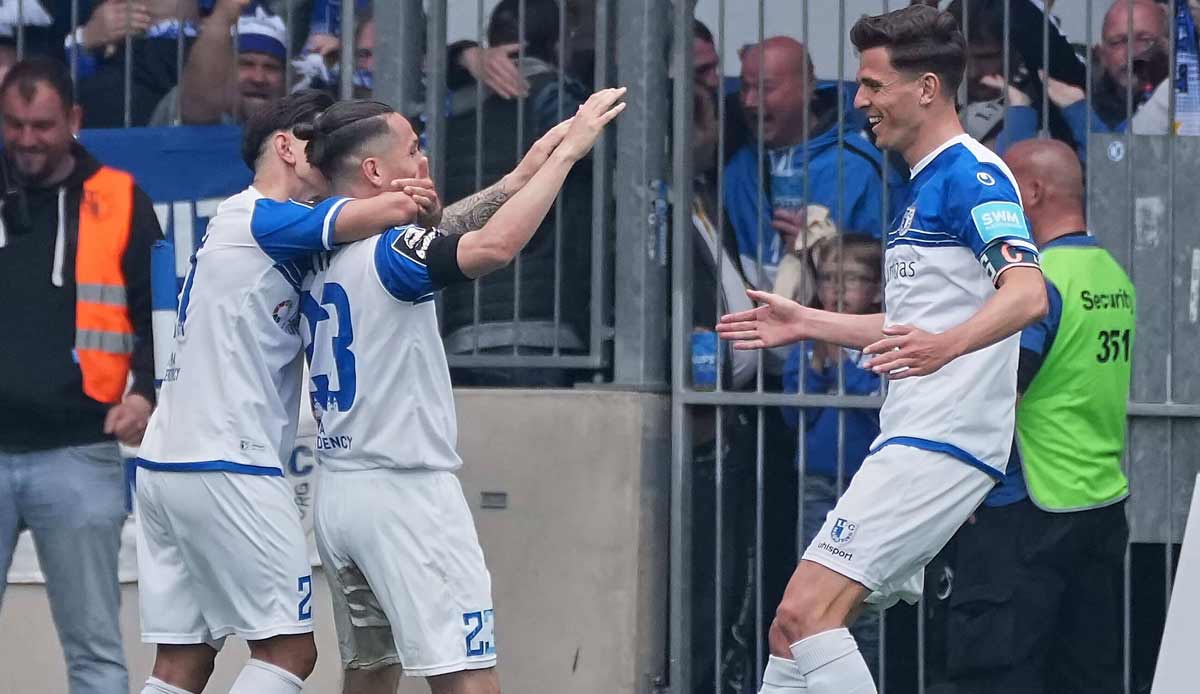 1. FC Magdeburg made the return to the 2nd Bundesliga perfect on Sunday. They managed a 3-0 (2-0) against FSV Zwickau, which also secured the third division championship.

When 1. FC Magdeburg’s second division return was perfect at 3.49 p.m., there was no stopping the fans: Hundreds of them stormed the pitch after the 3-0 (2-0) win against FSV Zwickau and celebrated their promotion heroes, who early secured the championship in the 3rd division with 72 points. The first match ball was already used, after three years of abstinence the European Cup winners of the cup winners from 1974 can sniff second division air again in the future.

“It’s unbelievable, I think it’s just world class how we stuck together. We deserved to be champions. I’m proud of the team. Now we’re going to celebrate,” said record scorer Baris Atik MagentaSport.

Even before the final whistle, the FCM pros had their first beer out of plastic cans with handles. Promotion coach Christian Titz was willing to take selfies with the fans on the pitch.

Jason Ceka (23rd), Davy Frick (40th, own goal) and Kai Brünker (88th) sealed promotion with their goals. Driven by 26,340 fans in the sold-out MDCC Arena, the hosts were on the move from the start and created many scoring chances. It was obvious to the FCM that they absolutely wanted to take advantage of the promotion opportunity. Since the twelfth day of play, Magdeburg has led the rankings in the 3rd division. “The FCM is back,” the supporters chanted loudly during the game.

DFB President Bernd Neuendorf congratulated on the promotion and praised the work of coach Titz. “A big traditional club with great fans is back in the second division. The development that the team has made under coach Christian Titz since he took office about a year ago deserves the highest recognition,” said Neuendorf in the DFB announcement.

The surprising 2-1 defeat of the pursuers 1. FC Kaiserslautern on Friday at SV Wehen Wiesbaden had already significantly increased FCM’s chances of promotion, because a draw against the Zwickauers would have been enough.

It was a highly emotional day for FCM, because on Sunday club icon Joachim Streich, who died on April 16 after a short, serious illness at the age of 71, said goodbye. Both teams wore mourning ribbons and there were also books of condolence for the GDR record player.

“In Joachim Streich we will say goodbye to a person who has done an incredible amount for the club,” Magdeburg’s head coach Christian Titz emphasized before the game. In addition, FCM legend Heinz Krügel would have celebrated his 101st birthday on Sunday.

The coach, who once worked for Hamburger SV, was certainly one of the guarantors of promotion. “He’s an outstanding coach,” said offensive star Baris Atik in the MDR podcast about the soccer teacher and also emphasized the composition of the team: “The team we have now is unique.” The goalscorer praised the character of the team-mates, “and the system just suits our team,” added Atik sky.

Atik himself was one of the great performers in the team with a third division record of 38 points (18 goals and 20 assists). Atik prepared the opening goal against Zwickau in an exemplary manner, and he also initiated the own goal.

Meanwhile, Titz emphasized the great euphoria in the metropolis of Saxony-Anhalt. “The importance of Sunday’s game is extremely high, people live the club,” he said. It’s not official, but the coach will stay with the club for the coming season after promotion.

On Sunday, 1860 Munich moved up to fourth place with a 6-0 (3-0) win at MSV Duisburg with 55 points. However, the chances of promotion are rather low, because the gap to Eintracht Braunschweig in relegation place three is six points.