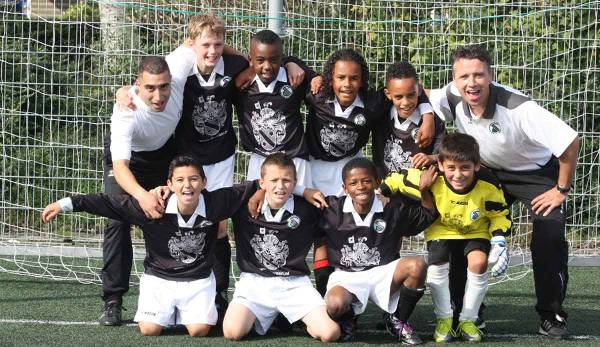 Joshua Zirkzee’s future at Bayern Munich is unclear, while his brother and cousin are fighting for their breakthrough in NRW. The trio came to Germany via similar routes.

Nelson Amadin apparently couldn’t wait for the official announcement, so he quickly announced his transfer himself. In January, the 21-year-old posted a photo on Instagram holding the royal blue jersey and wrote: “I’m delighted to announce that I signed for FC Schalke 04!”

With the move to Schalke’s U23, Amadin followed his two cousins ​​to Germany. The 16-year-old Jordan Zirkzee has been playing in the youth department of Bayer Leverkusen for a year, the best-known family member Joshua moved to the FC Bayern campus in 2017 and later became a professional.

The three not only have their current job in Germany in common, but also two ex-clubs: Spartaan ’20 from near Rotterdam and the big Feyenoord.

Zirkzee and Amadin: U11 doubles with Spartaan

Age-matched Joshua Zirkzee and Amadin played together for Spartaan in the 2010–11 season. “They were the team’s greatest talents, but two very different types of players,” recalled then-coach Ricardo Willemse SPOX and GOALS. “Nelson a winger with a lot of pace, Joshua technically and physically very strong and with a good shot.”

Zirkzee’s parents closely followed her career: her mother was Nigerian and her father was Dutch. “They didn’t have a football background, but they were there at every game. It was completely different with Nelson. His mother had her hands full with her many children and was unable to accompany Nelson,” reports Willemse, who accompanied him on the way to every game and training with the scooter at home.

On the way home there was mostly cheering, the team sensationally won the national U11 double of championship title and KNVB cup in the 2010/11 season. In fact, Zirkzee and Amadin with Spartaan trumped the youth selections of Ajax Amsterdam, PSV Eindhoven and Feyenoord Rotterdam.

See you at Feyenoord Rotterdam

Of course, Feyenoord immediately poached the small amateur club in the neighborhood and got Amadin. Zirkzee finally followed his cousin in 2016 after a stint at ADO Den Haag. In the meantime, Jordan, who was four years his junior, had also made it from Spartaan to Feyenoord. According to Willemse, who is still in contact with his former protégés, “the Zirkzee brothers are very close”.

The most promising talent has always been striker Joshua, who has also been regularly called up to various Dutch youth teams. Playmaker Jordan has completed a number of courses, but has not yet been used.

None of the three made the breakthrough at Feyenoord. Joshua Zirkzee left his favorite club the fastest and moved on to FC Bayern after just one year. “Joshua didn’t get full confidence at Feyenoord,” his father later told the Dutch newspaper NRC Handelsblad.

Amadin and the Zirkzees: Your Current Situation

Amadin moved to second division club FC Dordrecht, where he gained his first professional experience, but did not get a new contract in the summer of 2021. Six months later he signed with Schalke’s U23. With three goals in four games, Amadin got off to a strong start in the Regionalliga West before a toe injury that hasn’t got over it slowed him down. “Nelson is making progress, but it still takes a while for him,” said Schalke U23 coach Jakob Fimpel recently.

Jordan Zirkzee fought for a regular place at Leverkusen’s U17s after leaving Feyenoord, but had a disappointing season with his team. In the 17-club B-Junior Bundesliga West, Leverkusen only finished twelfth. Zirkzee is scheduled for the new season in the U19s, for which he has already completed two short assignments.

On the other hand, the future of the most famous member of the family is unclear: after a strong year on loan at RSC Anderlecht, Joshua Zirkzee returned to his regular club FC Bayern, but could leave him in the course of the summer. VfB Stuttgart and Ajax Amsterdam – the big Dutch rival of his former and favorite club Feyenoord – are said to be interested.

Newcastle United are also said to have kept an eye on him. This reports Het Laatste Nieuws, the largest daily newspaper in Belgium. Around ten million euros are needed to buy Zirkzee out of his contract with FCB, which runs until 2023.