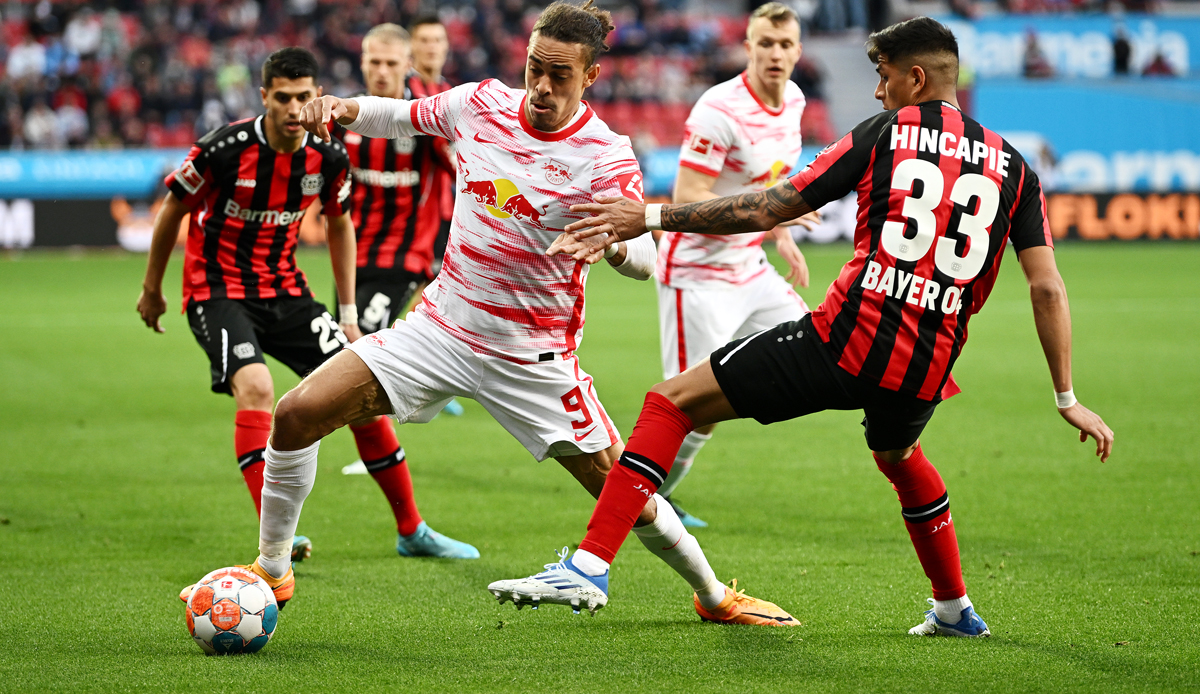 On the 30th matchday of the Bundesliga, Bayer Leverkusen welcomes Champions League rivals RB Leipzig. Here we tick the game in full length for you.

Follow Bayer Leverkusen vs. RB Leipzig in the live stream today – get a DAZN subscription NOW!

43: So little comes from Leipzig on the offensive that Tedesco should consider reacting during the break. Mind you, top scorer Nkunku is only on the bench and will definitely be an option.

40th: After a Hincapie cross from the left half field, Schick rushes in just a few moments too late and only catches the cross with the tips of his hair. That would have been another chance to score.

34th: Is the majority of the approximately 25,000 spectators already in a twilight sleep? It wouldn’t be surprising. If anything, there is some atmosphere from the Leverkusen Ultrablock.

31st: Surrounded and pursued by Tah, Tapsoba and Hincapie, Silva runs towards the Bayer goal and then goes down after a slight contact with Tah (a little too theatrically). Referee Siebert can continue.

29th: Diaby with the third ball contact – which then immediately becomes the best chance to date. The Frenchman is staged by Schick on the left, but he fails at Hradecky from an acute angle.

26th: Both are struggling extremely, but Leverkusen still seems a bit more active. Palacios got the third corner on the right in the last few minutes.

25th: A good example that shows that there is not much to do on the offensive: Diaby has only had two (!) ball contacts to date.

23rd: Mukiele rivets Bakker on the right, which gives Leverkusen a halfway decent standard. Palacios also brings it to the right post, where Tabsoba heads straight into Gulacsi’s arms.

20th: Both defensive chains form a wide, but above all very stable five-man chain against the ball, which to date has not allowed any penetration. Both here and there, everything is defended away cleanly.

16th: Andrich appears deep in the Leipzig penalty area after an Aranguiz chip, tries to put the ball inside, but is called back in action for offside.

13th: Aranguiz has an idea, plays Schick in the penalty area, but he immediately turns away and puts it back for Andrich, who then shoots clearly over it from 20 meters on the left. At least the first degree.

11th: With a lot of goodwill one could describe the initial phase as a game for lovers of tactics. For most viewers, however, it should simply be boring. Almost nothing has happened here so far.

7th: At Leverkusen, a double lead with Schick and Diaby then crystallized, with Diaby acting much more withdrawn, letting himself fall again and again and already indicating that he also wanted to come over the wings.

4th: Quiet start in Leverkusen’s Chempark: Leipzig has the ball a lot, but only lets it run through their own defense.

2nd: Briefly on the color: Leverkusen in the black and red home jerseys, Leipzig in the white away jerseys with the somewhat confused red applications.

Before start: The referee of today’s game is Daniel Siebert, who last refereed the heated quarter-final second leg in the Champions League between Atletico and Manchester City during the week. It is his 14th appearance in the current Bundesliga season.

Before start: RB coach Tedesco rotates properly after the Europa League appearance in Bergamo on Thursday and changes to a total of seven positions. Only Gulacsi, Orban, Gvardiol and Silva remain in the starting XI.

Before start: After the 0-0 draw in Bochum last week, Leverkusen coach Seoane brings two new players in midfield in Palacios and Bakker for Demirbay and Paulinho. In defence, Tah, who has been struggling with a bruised rib for the last few days, got fit in time.

Before start: RB Leipzig eliminated Atalanta Bergamo during the week and is in the semi-finals of the Europa League. Domenico Tedesco’s team also did well in the league, so participation in the Champions League is a possibility.

Before start: Bayer Leverkusen recently took seven points from three games and is well on course when it comes to the Champions League. One advantage over RB Leipzig is that they had no games during the week and are relaxed in the game against their Champions League rivals.

Before start: Welcome to the Bundesliga game of matchday 30 between Bayer Leverkusen and RB Leipzig. Kick-off in the BayArena is at 7.30 p.m.

DAZN shows the game between Bayer Leverkusen and RB Leipzig today exclusively from 7 p.m., kick-off is at 7.30 p.m., on dazn.com or via the DAZNapp as well as the linear TV channel DAZN 1 on TV and live stream.

the following DAZN-Personnel is on duty for you in this game:

A DAZN monthly subscription, which can be canceled at any time, costs EUR 29.99 a month, and a one-off annual subscription EUR 279.99.

Bundesliga: The table on matchday 30