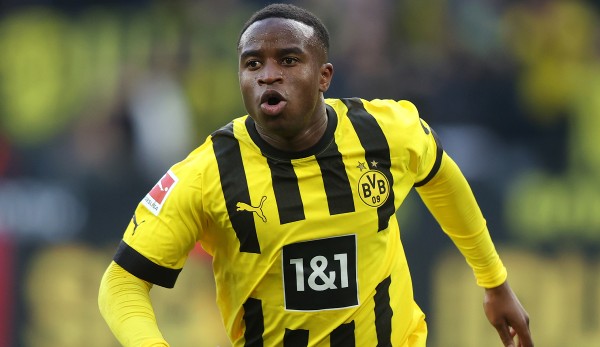 Youssoufa Moukoko will probably present BVB with a significantly improved offer. Julian Brandt does not believe in Marco Reus moving to Saudi Arabia. Ansgar Knauff talks about his future. Hans-Joachim Watzke comments on Sébastian Haller’s emotional comeback. Nico Schulz is still looking for a new club. Here you can find news and rumors about Borussia Dortmund.

Youssoufa Moukoko has still not extended his contract, which expires in the summer. Now, according to the BVB picture-Zeitung but be prepared to submit a significantly improved offer. Accordingly, Borussia Dortmund offers a four-year contract plus an option that could bring the 18-year-old up to six million euros per season. There would also be a bonus of ten million euros.

Patrick Williams has been in Marbella for negotiations since Tuesday. In the event of a deal, the Moukoko agent would receive a ten percent commission based on his client’s salary – around 2.4 million euros. In addition, BVB is now ready to grant him an extra payment of around five million euros. Dortmund would thus put together a total package of over 40 million euros for the attacker and his agent.

Still, that wouldn’t pay what Moukoko could earn in England or Spain. According to the report, the next round of negotiations is scheduled for today, Thursday. A decision is approaching. Also because BVB is not ready to increase the offer again.

BVB boss Hans-Joachim Watzke already announced this between the lines. “He’s now trying to get a good position for himself. That’s legitimate, but it’s just as legitimate that we have our ideas,” said the 63-year-old in an interview sky. If these are no longer congruent, “then the cooperation will not be continued.”

BVB, News: Julian Brandt does not believe in Reus moving to Saudi Arabia

Julian Brandt does not believe in his teammate Marco Reus moving to Saudi Arabia. “Personally, I can’t imagine Marco Reus in Al-Nassr’s shirt,” said the Borussia Dortmund midfielder sports1-Interview. For himself, the 26-year-old “categorically” ruled out such a step: “In any case, I couldn’t imagine playing in the desert at some point,” said Brandt.

In the past few days there have been rumors that Reus could be drawn to Cristiano Ronaldo’s club. “It’s normal for other clubs to be interested in a player like Marco,” said his agent Dirk Hebe recently. The BVB captain’s contract expires in the summer.

Ansgar Knauff’s loan to Eintracht Frankfurt ends in the summer. It is currently unclear what will happen next. The SBU would probably like to keep the winger, but he was an important part on the way to the Europa League title last year. In an interview with table football the player has now commented on his future.

He’s “relaxed” with the situation. “I’m concentrating fully on the second half of the season – everything is possible with this club,” said the 21-year-old: “We’ve had an exceptionally good season so far and we want to end it exceptionally well.” There is “not much time left to think about other things”. But sooner or later we will get together.

A possibly higher salary in the event of a contract extension in Dortmund is not decisive for him: “The most important thing is the sporting aspect, which is also shown by the decision to go on loan. I’m at the beginning of my career and it doesn’t do anything for me other than my sporting development watch.” Frankfurt or Dortmund? “Both great clubs with fantastic fans and awesome stadiums,” emphasizes Knauff: “Whatever the outcome, I can only win.”

BVB, News: “It was emotional” – Hans-Joachim Watzke on Haller’s comeback

Hans-Joachim Watzke has in an interview with sky talked about Sébastian Haller’s comeback. “It was emotional. So when you experienced it like we did in the first training camp,” said the BVB boss: “But of course what counts most is how he dealt with it. That was great.”

He himself had to think about how he would have dealt with it. “Well, I don’t know, I think that would have been much harder for me,” said Watzke: “He did a great job.” Haller was diagnosed with testicular cancer last year. In the winter training camp he celebrated his comeback on the pitch.

It is an open secret that Nico Schulz should leave BVB as soon as possible. Both parties seem to agree on this. according to the Ruhr news however, there is not a single offer for the left-back. Even Lazio’s alleged interest was not as concrete as reported. There is much to suggest that Schulz will stay in Dortmund for another six months. Above all, his high salary and the lack of match practice would be a problem.

In the training camp in Marbella, Schulz should also not perform well. According to the report, the outside player just trots along and lacks any intensity. The 29-year-old still has a contract with BVB that runs until 2024.