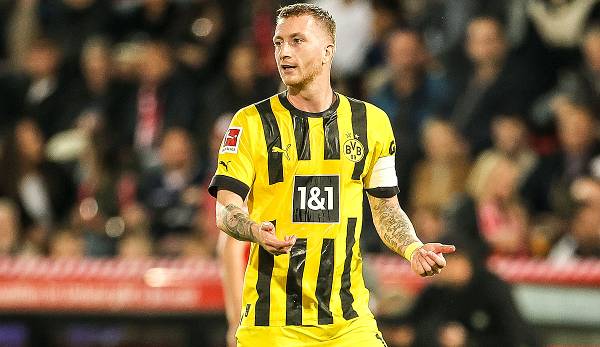 Marco Reus’ contract poker is probably completely open, and saying goodbye to BVB in the summer also seems possible. Julian Brandt talks about his own future. Youssoufa Moukoko is apparently waving a fat hand money. And: Sébastien Haller is overjoyed after his comeback. Here you can find news and rumors about Borussia Dortmund.

The future of Marco Reus is probably completely open. A farewell to the midfield star from BVB in the summer also seems possible. This is from a report by sports picture out. According to this, both sides should go into the upcoming negotiations with the general intention of wanting to extend Reus’ contract, which expires in the summer. But poker is far from decided.

Because the Dortmund bosses should not have made a final decision internally as to whether they really want to keep the captain beyond the summer. Reus himself is also dealing with other options.

Difficult contract talks are expected, the negotiations should be started soon.

Most recently there were rumors about a move to the Ronaldo club Al-Nassr, which Reus openly commented: “Of course I’m looking ahead, I still have six months of contract, it would be wrong if I didn’t worry.”

Reus is therefore angry that there is a lot going on in the background about 18-year-olds, while his own contract situation is still not being addressed. According to sports picture there should be contract talks with Reus in the near future.

“I still have six months under contract, I have to think about it. We will have talks and see in which direction it goes,” said Reus in the Dortmund training camp in Marbella.

Meanwhile, Moukoko is said to have also come under the spotlight of Newcastle United. The Magpies reportedly lured the 18-year-old with a signing fee of €30m. Here is the detailed news.

“The player has to know exactly what he has in the club, the city and the people,” said Kohler sports picture. “If he doesn’t accept that and thinks about the business above all, then Borussia Dortmund should also say: ‘This far and no further, then you have to go.'”

In his eyes, Moukoko didn’t just get his playing time during Sébastien Haller’s absence, Kohler explained: “Edin Terzic strives to integrate and develop the young talents, similar to what Jürgen Klopp did. Moukoko should recognize that and not endanger it. Chelsea or Barcelona? He’s not good enough for that yet!”

Borussia Dortmund coach Edin Terzic commented on the rumored move from Marco Reus to the Saudi Arabian club Al-Nassr after the friendly against Fortuna Düsseldorf (5-1).

“It’s a rumour, there are a thousand other rumours. We don’t comment on that. These are things that we can’t influence,” said the BVB coach.

Reus’ teammate Julian Brandt also commented on the speculation about a possible move to the Ronaldo club. “Personally, I can’t imagine Marco Reus in the Al-Nassr shirt,” said Brandt sports1.

In general, Terzic said about the expiring contracts at BVB: “These topics are discussed in offices, not on the training ground. The other topics are just not important between me and the players.”

The rumors that Julian Brandt could fall victim to a possible Dortmund upheaval in the summer leave the national player cold. “Oh, I’ve read that more than once. I’ve sometimes wondered where that came from. At least in the four years in Dortmund, nobody came up to me and said: ‘Jule, we’re considering giving you up.’ That’s why I never got nervous,” Brandt said in an interview sports1.

A move to Arsenal FC last summer was “never a serious issue” for him. Brandt, whose contract with BVB runs until 2024, is not pursuing a career plan. “Everything is open to me,” said Brandt. “I feel good here, but who knows where the wind will blow you. If everything goes well here, if we hug each other and I extend, then I would be happy. But anything can happen.”

As a child, he made it his goal “that I would become a professional and return to Bremen at some point. My little brother plays there, my family lives in Bremen. I have a special relationship there. That doesn’t have to happen, it was more of a spontaneous reaction to other players moving to the desert. But that would certainly be more my thing.”

Sébastien Haller was overjoyed after his comeback from cancer. “I feel great. I’ve been waiting for this moment for a long time. It’s great to be playing with my team again – I have a good feeling for the ball again and it’s nice to feel the fans. That inspires me,” said Haller after BVB’s 5-1 win over Fortuna Düsseldorf sky.

“There is still a big difference between training and playing and of course I noticed that today. I’m not far from my best form and it’s just a question of how well I’m working now. I just need a little more time and that’s what will happen on its own,” added the attacker, who had to undergo two surgeries and chemotherapy after being diagnosed with testicular cancer last summer.

Haller hopes to be able to celebrate his competitive debut for BVB when the Bundesliga restarts against FC Augsburg on January 22nd. “Of course it’s a goal for me to be there. But there’s no rush – the most important thing is to help the team. Being here is one thing, but being helpful is quite another. I’m doing my best to help the team,” said Haller.