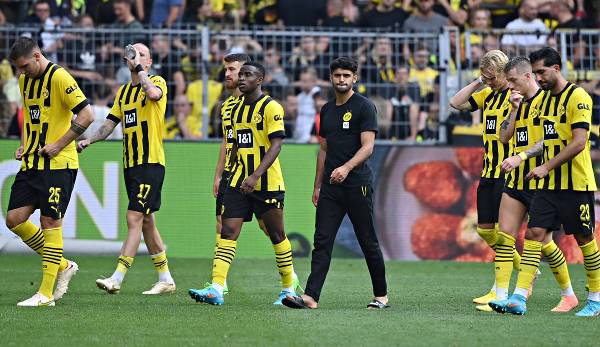 In an interview after the historic defeat against SV Werder Bremen, BVB captain Marco Reus commented on Anthony Modeste and other topics. Here you can find news and rumors about BVB.

Click here for the news about BVB from the past day.

Does Thomas Meunier still leave BVB? As the picture writes, there is a lot of trouble between the Belgian and coach Edin Terzic. In the 2-3 draw against Werder Bremen, the full-back was on the bench for 90 minutes, with Marius Wolf preferred instead.

“I want to get out of here,” Meunier told the newspaper after the game. The Belgian was substituted during the break last week. Manchester United and FC Barcelona are said to be interested, the Spaniards wanted to loan the 30-year-old in winter.

Sports director Sebastian Kehl contradicted this picture TV: “Currently there are no offers for Meunier. We haven’t dealt with it.” Kehl still left a back door open: “Maybe something else will happen, but it’s not planned.”

BVB captain Marco Reus defended his strike partner Anthony Modeste in an interview. In conversation with t-online he explained that the performance was “not just due to Toni”. In the 2-3 defeat against SV Werder Bremen, they “didn’t play well overall.” Borussia didn’t manage to “involve Modeste in the game” enough. Now that has to be discussed. “It was a shock for all of us,” Reus sums up.

In the historic defeat against Werder Bremen, things did not go well for the new BVB signing. In the previous two games, Modeste only managed 35 combined ball actions. There were only twelve against Werder themselves. He passed the ball nine times, but it only got to the other player six times (67 percent). He didn’t fire a single shot against Bremen and lost seven of his eight duels. In addition, the interaction with the new colleagues did not work: Modeste was found offside three times during the pass.

BVB captain on claims. your own way of playing and overused luck

In the same interview, he also spoke about the defeat itself. Three goals conceded in five minutes – “that simply shouldn’t happen to us in this way,” said the captain, recalling the Champions League game against Malaga FC in 2013 when BVB was able to turn a 1:2 deficit in the quarter-finals of the premier class in added time. Reus himself scored in the 90th + 1 to make it 2-2 before Felipe Santana scored the 3-2 winning goal a minute later.

But it is also clear that “three or four games were not convincing”. The Dortmunders lacked “a bit of automatism”, the captain sums up the start of the season. The injury to team-mate Mahmoud Dahoud also hurt them: “He’s an important player for us to gain control of the game and set the tone in terms of play.”

You were lucky in the first two games. That has now been lost. “Now we’ve been punished because we pushed our luck a bit,” said Reus. Now you have to “catch up again”, discuss the scenes in the team and “step on the gas again”.

A defeat despite being in the lead after 88 minutes is a historic event – for the Bundesliga and for Europe. According to the Bundesliga, this has never happened before, even in the top German league in 7,221 games. Five games were saved to a draw, the other 7,216 games were won by the leading team. The victory of SV Werder Bremen thus represents a statistical anomaly: the first win in this situation after over 7,000 games. This accounts for 0.01% of the games in which the losing team has been victorious since Saturday.

But it is also a novelty in Europe. Noisy ESPN-Statistics, there hasn’t been a single such case in Europe’s top 5 leagues over the last 13 seasons either. Of 8,529 games, 18 ended in a draw, the other 8,511 games were won by the leading team. This defeat was absolutely historic on several levels.