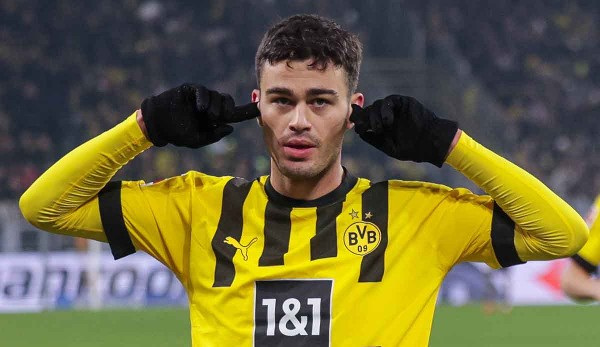 In the wild ride against FC Augsburg, Borussia Dortmund can rely on quality that has been tried and tested this season. At the same time, this could lead to hardship, which in turn is desirable. Nevertheless, coach Edin Terzic also relies on the principle of hope when eliminating well-known problems. The BVB findings.

It was comeback day in Dortmund. Of course, the emotional return of Sébastien Haller, who played for the first time ever in a BVB competitive game after his cancer, outshined everything.

Goalscorer Jamie Bynoe-Gittens also made a successful return after injuring his shoulder in his first game since early September. After turbulent weeks with the US national team, Giovanni Reyna also made an impressive comeback with his winning goal in the wild 4:3 spectacle against FC Augsburg. But like before the World Cup break, BVB showed two faces again. The findings.

BVB: You can rely on Edin Terzic’s golden touch

After the first emotional jolt after Haller’s substitution in the 62nd minute had evaporated, BVB coach Edin Terzic reacted in the 70th minute with a double substitution: Jamie Bynoe-Gittens and Giovanni Reyna replaced the hapless Karim Adeyemi and Donyell Malen. And both changes paid off.

Bynoe-Gittens showed his strengths in a one-on-one just seven minutes after being brought in and with his movement from the left wing towards the middle was reminiscent of a certain Arien Robben – including a precise finish. Reyna’s joker goal, which is also worth seeing, made the decision.

“We were the team with the most joker goals before the game, now we’ve added two more,” said Terzic. Overall, it was the six and seven joker goals this season – that means top of the league together with Eintracht Frankfurt.

Bynoe-Gittens also scored when he made his first joker appearance on Matchday 2 in Freiburg (3-1), but then suffered a serious shoulder injury three weeks later and hasn’t played a game since the beginning of September. “Jamie has incredible abilities and we know that. We missed him and this type of player a lot because he can have these magical moments,” said Terzic about the return of the 18-year-old Englishman.

Reyna, who demonstratively covered his ears while cheering after his goal, made a special statement. “Gio has gotten his face in the last few weeks,” Terzic said DAZN and alluded to the Hollywood clinch in the US team with coach Gregg Berhalter, in which Reyna’s parents are mainly involved.

BVB: There is a risk of hardship in the squad – and they are welcome

Incidentally, Reyna and Bynoe-Gittens also sent clear signals to the competition within the team with their joker goals. Adeyemi and Malen in particular, who again failed to impress in their starting XI appearances, have to seriously fear for their place in the next few weeks.

“The squad is of very good quality. At Borussia Dortmund, like at the other big clubs, competition is part of it,” emphasized sporting director Sebastian Kehl before the game. “I ask all players to accept the situation.”

If the now ailing Marco Reus and Emre Can are fit again, there will be more hardship cases in the coming weeks. According to Terzic, this is also desired. “We want to get to the point where we have to make tough decisions on the day of the game so that we still have enough options to be able to react to things,” said Terzic, who had to moderate the first case of hardship in Niklas Süle.

“We chose Nico and Mats because they did really, really well in the pre-season games and in training this week. They were a step ahead,” added the BVB coach. “Nevertheless, Niklas did a good job.” The fact that Süle came on as a substitute in the final phase was still important and also proof that everyone is needed.

“We’re just happy when we have a lot of options,” emphasized Terzic and recalled the bad luck with injuries in the season so far: “At some point the line-up came about by itself because the shortage of personnel was so great.”

Terzic also rated the improvements in the offensive standards as a step forward. Because with only three goals after the ball was stationary, Dortmund were one of the most harmless in the league before this game. On Sunday, Nico Schlotterbeck’s goal to make it 2-1 after a free-kick from Julian Brandt paid off the work of the past few weeks.

“I’m very happy that we were very dangerous with offensive set pieces because that was a focus in the last few weeks,” emphasized Terzic. He would have preferred to see it if Mats Hummels had also used the chance to make it 3-1 shortly before the break, following a similar pattern.

“We have noticed that the things we have rehearsed work. That makes us optimistic,” Terzic noted at least this partial success. But with all the positive side aspects, BVB is also dealing with a tiresome ongoing topic in the new year.

BVB: A lack of balance and the principle of hope

The Dortmund dilemma could also be attached to Schlotterbeck himself. The central defender initiated the first Augsburg goal by Arne Maier with a careless loss of the ball, only to mark the new lead minutes later with a header. With a strong change of game, Schlotterbeck initiated Bynoe-Gittens’ goal in the second half – only to get Augsburg back into the game two minutes later with a bad pass just before the 3:3.

“Nico still did well, scored a great goal. He created a lot of chances and was very calm on the ball,” his coach Terzic emphasized Schlotterbeck’s good contributions to the game. Nevertheless, he also knows about the fatal imbalance between offensive and defensive. “We’re not satisfied that things got too exciting at the end, because we can’t assume that we’ll win every game in which we concede three goals. We’ve raised the subject more than once,” emphasized Terzic. “It wasn’t a good balance between what we had to invest to create a chance or score a goal and what Augsburg had to invest to do that.”

Terzic had slightly adjusted his basic formation and used a 4-1-4-1, in which he ordered Jude Bellingham to play eighth in a slightly more offensive role and declared Salih Özcan as the sole six to clear the game. Özcan did not do justice to this role, especially before the two goals conceded in the first half.

Terzic was a bit surprised that the system change was such a big topic at the press conference. “But of course that’s a legitimate question. We are very flexible in this system, depending on how we design the center,” he emphasized, emphasizing that this basic order had already been used against Manchester City, Sevilla and Bayern . “The system is not new. It’s not about how we interpret the numbers, it’s about filling the whole thing with life and with the player profiles.”

At least in this respect, Terzic has a wide choice given his currently large squad. For the away game in Mainz, he will have to reorganize his midfield center because Bellingham will be suspended due to his fifth yellow card. When looking for the right balance, the Dortmund coach relies on hard work – and the principle of hope: “It’s about taking the positive things with us to gain self-confidence and addressing the negative things again to turn them off. Then hope we just want to get the next win on Wednesday.”

BVB: The next games at a glance