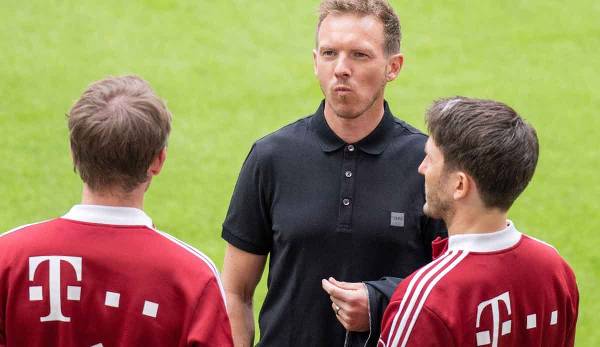 Since the arrival of coach Julian Nagelsmann, FC Bayern Munich has almost exclusively signed players who have either been clearly socialized with either dominant ball possession or fast-paced switching football. How does that fit together? Some data and observations.

The two great Dutch coaches may not have liked each other personally, but they are both considered pioneers of dominant possession football, which Guardiola would later perfect as a coach. First at FC Barcelona, ​​then from 2013 to 2016 at FC Bayern, where van Gaal had already done outstanding preparatory work. In between, Jupp Heynckes brought the treble to Munich.

“Heynckes later told me that he simply continued Louis’ approach,” van Gaal’s assistant coach at the time, Andries Jonker, later reported in an interview with SPOX and GOAL. “And all the coaches that followed did the same. That’s nice to see. We created a different, a nicer Bayern.”

Since van Gaal’s tenure, FC Bayern has stood for dominance through possession. Challengers like Jürgen Klopp, who caused a sensation with his counter-pressing at Borussia Dortmund and Liverpool FC, soon opposed this approach. Or the Red Bull company teams, for which mastermind Ralf Rangnick has prescribed fast-paced switching football. Means: aggressive approach and exploiting the opponent’s unsortedness when changing possession.

The dilution of football schools

In the meantime, the once clear separation is no longer so easy, representatives of the actually contrary strategies borrow ideas and players from the other. “The different schools have been watered down in recent years. The classification used to be more conspicuous than it is today,” says Frank Wormuth in an interview with SPOX and GOALS. As a long-time coach-instructor for the DFB, he followed developments in international football closely and now works in the Dutch Eredivisie.

In fact: counter-pressing lover Klopp trusts in his Liverpool midfield, for example, on the pass machine Thiago, whom Guardiola once brought to Munich. Guardiola himself has become more pragmatic in his approach, especially since moving to Manchester City. The two most well-known representatives of the contrary schools converged, meanwhile many younger coaches were inspired by both.

Julian Nagelsmann, for example, who creates a game-philosophical mishmash at Bayern Munich. The transfer policy shows this very strikingly: Since Nagelsmann’s arrival in Munich (except for Omar Richards), only players who were clearly socialized in football in one of the two opposing schools have come.

FC Bayern: Newcomers from Ajax and the RB cosmos

Last summer Dayot Upamecano and Marcel Sabitzer from Leipzig. Two classic RB pupils who had previously played in Salzburg. It was there that the most prominent newcomer of the summer made his breakthrough before becoming a world star in Liverpool under Klopp: Sadio Mane.

On the other hand, Noussair Mazraoui and Ryan Gravenberch: Both have been trained since early childhood in the Ajax academy, next to Barcelona the second traditional hotbed of possession. They are likely to think of football in a similar way to many long-established Bayern players who continue to swear by Guardiola’s ideas of dominance.

“In any case, it’s not harmful that Nagelsmann is looking for players from different schools,” says Wormuth, under whom Nagelsmann completed his coaching license in 2016. “He brings in players who are used to enjoying possession of the ball and those who can attack the ball: This combination is excellent. In certain situations, Nagelsmann can benefit more from different players than from others.”

But what does Nagelsmann actually stand for? Although his way into the coaching elite has led through the Rangnick offices in Hoffenheim and Leipzig, he is more of an advocate of possession football. Nagelsmann came to Leipzig to teach the club, which had become the title contenders, a more dominant style of play, as Rangnick confirmed: “We took Julian because we were convinced he would take us to the next level.”

Developments have been underscored with signings of suitably trained players such as Dani Olmo (once in Barcelona youth) or Angelino (from Guardiola’s Manchester City).

When he took office in Munich two years later, Nagelsmann emphasized: “I’m not going to turn everything upside down here, we have to be flexible.” Although he found a completely different foundation than in Leipzig, it triggered a comparable development. Even if not as clearly, the numbers moved in a similar way.

After Guardiola’s ball possession marriage, FC Bayern’s style of play under Carlo Ancelotti, Jupp Heynckes, Niko Kovac and Hansi Flick became a little more pragmatic, although the basic idea was retained. Under Guardiola, the proportion of ball possession was consistently over 70 percent, while he never won more than 200 balls in the attacking third per season.

Although Nagelsmann can generally be attributed to the ball possession school, he also likes to use elements of switching football. Just like his predecessor Flick, Nagelsmann attaches great importance to winning the ball in counter-pressing. Despite the highest mental and physical intensity in the first few seconds after losing the ball, save energy in the long run because there are no longer any ways to the back and back to the front.

The implementation did not work consistently in its debut season, as the slight drop in the numbers compared to the previous year shows. When FC Bayern presented themselves in an exemplary manner in a 4-1 win against Hertha BSC in January, Joshua Kimmich revealed: “We wanted to focus on counter-pressing. That was good today, so we had a lot of high ball wins.”

Konrad Laimer, Nagelsmann’s declared dream player for central midfield, should ensure further improvement in this discipline in the future. The two already worked together in Leipzig, Nagelsmann paid homage to him at the time as a “monster ball-conquering machine”. Should Laimer actually come, he would be the fourth commitment with an RB past – and would duel in midfield with, among other things, the Ajax newcomer Gravenberch for game shares.