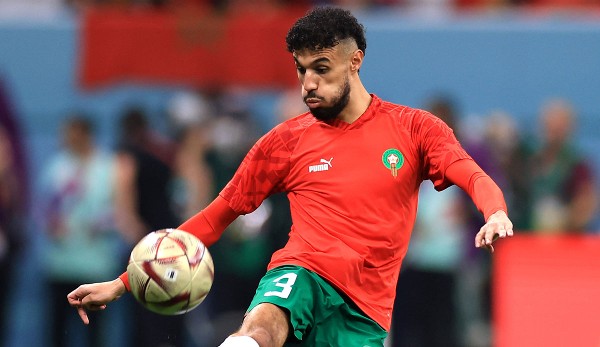 Marcus Thuram is said to be not an issue at Bayern Munich for the summer either. Those responsible in Munich are probably upset because of the use of Noussair Mazraoui in the World Cup semi-finals. In addition, Benjamin Pavard is apparently in talks with FC Barcelona. Latest news and rumors about FCB.

FCB, rumor – Because of Mazroui’s use in the World Cup semi-finals: Trouble with FCB bosses?

The use of Noussair Mazraoui in the World Cup semifinals against France apparently caused trouble for those responsible at FC Bayern. According to information from sports1 the Moroccan received clearance for the game from his national team’s doctors. The examinations were probably unremarkable and a corona test was negative. That’s why the defense attorney doesn’t seem to blame the medical staff. FC Bayern, on the other hand, would have liked more caution.

According to a report by picture the opinion prevails in Munich that the Morocco star should not have played. Mazraoui fell ill with Corona during the World Cup and the Bayern doctors discovered a mild inflammation of the pericardium during a follow-up examination. You can find the news about it here.

“Mazraoui tested positive for the corona virus during the World Cup in Qatar at the beginning of December and therefore missed the quarter-finals against Portugal,” FC Bayern said in a statement. The semi-finals took place just four days after the quarter-finals.

Sports director Hasan Salihamidzic did not want to express any criticism at a press conference in Doha on Saturday. “It’s difficult to say if it was too early. He had also been in contact with the Moroccan medical department and our doctors. The tests were all okay. We all don’t know how it is with post-Covid. It’s very bitter for us. We’ll have some conversations about why this happened to us again. He’s an important player for us. Of course there was contact between the doctors. We had very, very good communication. Now he wasn’t feeling well, and we checked again. You have to be careful with that. It takes time. We will check every week,” said Salihamidzic.

FCB, rumor: Thuram probably not an issue in the summer either

Marcus Thuram will probably not leave Borussia Mönchengladbach in winter. Not even to FC Bayern. According to information from sky the Frenchman is not a transfer target for Munich. According to the report, the 25-year-old shouldn’t be an issue on the Isar even in the summer.

The same probably applies to Randal Kolo Muani. After an announcement by SGE sports director Markus Krösche, the initial interest in the striker has apparently died out. The Frenchman shone in the first half of the season, especially as an assist (10).

FCB, on the other hand, apparently wants to do more to extend Eric Maxim Choupo-Moting’s contract. The striker has become a top performer in Munich with 11 goals in 16 games. The first talks have probably already been held. However, Manchester United’s interest is said to have increased significantly.

FC Bayern surprised by signing Daley Blind. The reason could well be the long absence of Noussair Mazraoui. According to information from picture-Zeitung have accelerated the transfer, which is expected to be four to six weeks without the Moroccan.

Accordingly, the right-back was also intended as a possible left-back after Lucas Hernandez’s injury should Alphonso Davies need a break or get injured. This backup role will now probably be taken over by the versatile blind.

Pavard in talks with FC Barcelona

Benjamin Pavard is apparently in contact with FC Barcelona. According to information from table football Are the Catalans interested in the Frenchman?

The 26-year-old still has a contract with FC Bayern until 2024, but is probably dissatisfied with his position on the field, which could stand in the way of an extension.

However, Hasan Salihamidzic would like to hold on to the Vice World Champion. “We will have talks. It doesn’t matter to me whether there is contact with other clubs. We have different goals. Benji is an important player for us. He says he feels very comfortable,” said Bayern’s sporting director.