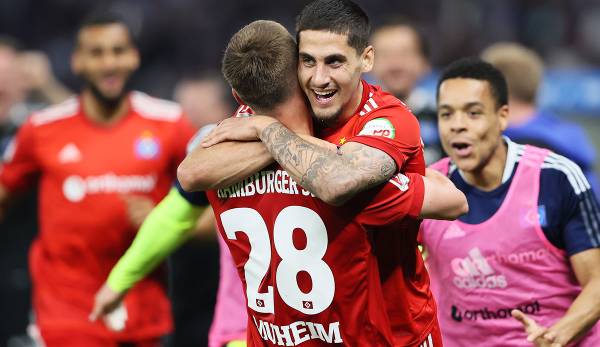 Hertha BSC is threatened with relegation, Hamburger SV is about to return to the Bundesliga after the 1-0 win in the relegation first leg.

Felix Magath hurriedly disappeared into the catacombs after the final whistle. No encouraging word to his disappointed players on the pitch, no congratulations to the opponent – the frustration of the Hertha BSC coach was initially huge after the serious setback in the relegation first leg.

Only his old love Hamburger SV could celebrate: After the 1-0 (0-0) in Berlin, HSV came a lot closer to the goal of returning to the Bundesliga. “We played more football. It was a great performance, we didn’t allow much. It was a nice first leg,” said HSV sports director Jonas Boldt sky: “Now we want to top it all off. The starting position is comfortable. The city is dying for it.” Magath later expressed himself in an initial analysis: “We acted like a Bundesliga club. But so did HSV.”

In the showdown on Monday, Hamburg holds all the trumps at home. Coach Tim Walter got the team in the mood for the season finale with a passionate speech on the pitch, then the Rothosen celebrated in front of around 20,000 Hamburg fans who had traveled with them.

The mood was particularly exuberant for Ludovit Reis, who had sent his team on course for the Bundesliga with a dream goal (57th). With the sixth win in a row, Hamburg gained more self-confidence and now has the best chance of moving up at the fourth attempt.

The Bundesliga-16. Hertha, on the other hand, have their backs to the wall and in the second leg have to offer a lot more offensively than on Thursday in order to prevent the seventh relegation in the club’s history and the first of coach Magath. The HSV icon is threatened with this humiliation with his old love of all people. “HSV has a better hand now. But we don’t go to Hamburg without a chance. I still believe that we can turn things around in Hamburg,” said Magath.

The backdrop of 75,500 spectators in the Olympic Stadium, including up to 20,000 guest fans, created a cup final mood. But for both teams there was more at stake than “just” a title. Magath in particular seemed extremely tense. Again and again the 68-year-old jumped up from the bench and discussed almost every controversial decision of the referee.

Hertha’s self-confidence had suffered significantly after three missed match points to stay up, and initially they rarely dared to go on the offensive. In the last home game of the season, the Berliners seemed to rely primarily on counterattacks and the standard strength of left-footed Marvin Plattenhardt.

However, goalkeeper Christensen, who replaced the injured Marcel Lotka, was almost unemployed for a long time on his competitive debut for Hertha. The Hamburgers, where Maximilian Rohr had replaced Joshua Vagnoman in the team, initially did not get beyond good approaches.

HSV had bad luck when referee Harm Osmers denied a penalty after a handball by Peter Pekarik in the 32nd minute. After studying the video images, Osmers had also recognized a handball from the Hamburger Rohr. But there was also a millimeter decision to Hertha’s disadvantage: Ishak Belfodil’s header goal was disallowed due to a razor-thin offside.

Magath reacted to his team’s rather harmless performance at half-time and brought in fresh attacking power in Stevan Jovetic for the inconspicuous youngster Luca Wollschläger. The man from Montenegro brought a lot of momentum and fitted in well with a chance (56th).

Hertha seemed better in the game – but then Reis scored for HSV. The hosts responded with furious attacks but left defensively vulnerable to counterattacks.

Felix Magath (Hertha BSC coach): “We acted like a Bundesliga club. But so did HSV. HSV now has a little better chances. But we don’t go to Hamburg without a chance. I still believe that we can turn things around in Hamburg.”

Tim Walter (Hamburger SV coach): “We’re enjoying the whole thing because we deserve it. That’s the nice thing, we’ll take the euphoria with us. We’re the youngest team in the second division, it’s worthy of all honor to survive here like this.”

Hertha BSC – HSV: The data for the game