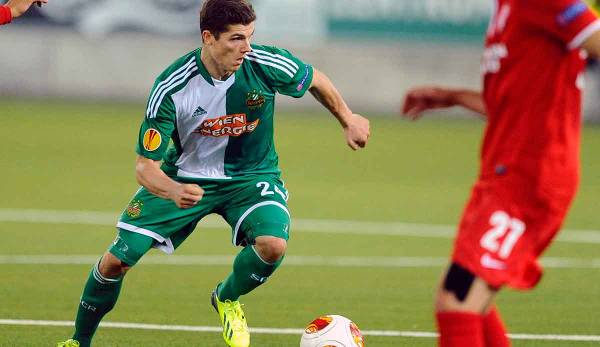 Marcel Sabitzer’s transfer from RB Leipzig to FC Bayern sparked well-known discussions about the weakening of the Munich competition. It was not the first controversial move in the life of the 27-year-old midfielder. A look back at Sabitzer’s journey from Rapid via Salzburg to Leipzig.

Shrill whistles echoed through the Leipzig arena on Saturday evening when Marcel Sabitzer entered his former club’s place in the middle of the second half wearing FC Bayern Munich’s jersey. “That was a bit close to me,” he admitted after his new employer won 4-1 over his old employer.

Surprisingly, the anger of the fans did not come as a surprise. The Leipzig captain followed defender Dayot Upamecano and coach Julian Nagelsmann to Munich shortly before the end of the transfer phase for 15 million euros. Sabitzer, the third prominent defector from runner-up to series champion in just one summer. Reason enough for collective outrage.

It wasn’t the 27-year-old midfielder’s first controversial move. As Sabitzer now symbolizes the traditional weakening of the competition of FC Bayern, he symbolized the alleged competitive advantage of the Red Bull soccer empire with his move from SK Rapid Vienna to RB Salzburg in 2014.

Sabitzer was considered a great talent in Austria since childhood. At the age of 14, he even completed a trial training session at FC Bayern, and from the U16 he was used for all U-national teams. In January 2013, Sabitzer finally moved from the Viennese suburb club Admira Wacker Mödling to the big Rapid for 350,000 euros. He quickly became a regular there and aroused interest with his strong performances – including from Salzburg.

Theoretically, Rapid found itself in a comfortable position to withstand the advances of its financially operating rival in other spheres. Sabitzer had a release clause of two million euros, but this only applied to foreign clubs. Probably primarily to prevent a possible transfer to Salzburg.

After a year and a half, however, Sabitzer switched to his direct rival in 2014 – and Rapid had to watch powerlessly. Mainly responsible for this was Ralf Rangnick, then sports director of Salzburg and Leipzig, which is appropriately abroad. So Leipzig paid the two million euros for the then 20-year-old, gave him a four-year contract and loaned him to Salzburg the next day.

The Viennese fans raged, the also German sports director Andreas Müller complained in the Austrian courier about a “G’schmäckle”: “That’s what we Swabians say about deals that look like trickery.” G’schmäckle actually sounds too cute for this transfer. If you will, it had more of a full-fledged taste.

Incidentally, a few weeks later, Rangnick also saw this. “That was indeed a bit unfortunate, we wouldn’t do it that way today,” he announced in an interview with the Süddeutsche Zeitung. Sabitzer himself later told this mirrors: “I didn’t feel comfortable with it. At the time I really thought about breaking it off because I knew that there could be a lot of headwinds. But from a sporting point of view, it ultimately paid off.”

He had correctly anticipated the headwind. He came in on the first day of the new season when Rapid made a guest appearance in Salzburg. The whistling concert when Sabitzer came on was screaming, maybe even more screaming than last Saturday.

Marcel Sabitzer wanted to prevent a “return” to Leipzig

Incidentally, Sabitzer only spent a year in Salzburg before “returning” to Leipzig. With a fabulous 47 scorer points in 39 games, he had lifted Salzburg to the national double and also gained experience in the European Cup. At that time he was still mainly used as a striker. Because of this impressive performance record, double sports director Rangnick saw Sabitzer fit for the step to the then German second division club. But Sabitzer himself saw it quite differently.

“I will go where I can develop myself best,” he said at the end of May 2015. “If I am honest, Leipzig is not in my head for further development.” Quite bold statements for a player with a current contract with this club. At about the same time, Rangnick announced: “Our point of view is absolutely clear: Marcel Sabitzer has a contract with RB Leipzig and will play in Leipzig next season.” One will “not move a millimeter away” from that.

How Leipzig duped Salzburg on the Sabitzer “return”

Shortly thereafter, Rangnick gave up his dual sports director post to take on the coaching position in Leipzig for the first time. Christoph Freund, who is still in office today, was his successor in Salzburg. On June 27th, he announced a decision about Sabitzer’s future after his return from vacation on July 2nd. “Then we will sit down at a table, talk about his future and decide what is best for him and everyone involved,” said Freund.

Only one day later, on June 28th, Leipzig reported Sabitzer’s “return” on its website. A show of force as to who has the last word in the closely interwoven Red Bull cosmos at the time. Leipzig duped Salzburg.

A little later, the two clubs had to officially break away from each other in order to be able to compete in the European Cup – the flood of transfers from Salzburg to Leipzig did not affect that until today, as is well known.