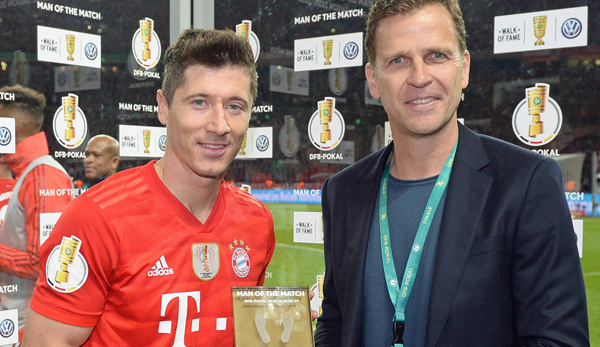 Ex-scorer Oliver Bierhoff would regret Robert Lewandowski’s departure from Bayern Munich, but sees a change as an opportunity for the Bundesliga. He also spoke to SPOX and GOAL about the chances of a former club winning the championship.

“In sporting terms, it would of course be a great loss for the Bundesliga and FC Bayern if Robert Lewandowski were to leave. He is an absolutely exceptional striker and one of the best attackers in the world. It’s impressive what he’s achieved in recent years,” said the DFB director in an interview.

Should it happen that the Munich and the top scorer of the past few years already separate a year from the end of the contract this summer, Bierhoff hopes above all for a sensible approach.

“I wish that both sides treat each other fairly and respectfully,” Bierhoff explained: “If it ultimately depends on financial aspects, because it may be about his last contract, then you have to accept that. But Lewandowski should also try , to regulate these things internally with his management.”

It is currently unclear how Lewandowski and his advisor Pini Zahavi will react to the refusal of the Bayern bosses, who have so far ruled out an immediate sale, given FC Barcelona’s specific interest.

If Bayern’s star striker were to go abroad, Bierhoff said that would be a great opportunity to break the record champions’ long-term dominance. “Perhaps his departure could also create more excitement and competition in the Bundesliga,” he explained.

“Borussia Dortmund did very well with the signings of Niklas Süle, Nico Schlotterbeck and Karim Adeyemi and sent the signal that BVB wants to attack again. Other teams such as Leipzig and Leverkusen will also upgrade, so next season can be exciting . And I think in the end even Bayern will be grateful when the competition gets closer to them and creates more excitement.”

Bierhoff himself was never in the Bundesliga, but in Serie A champion and top scorer, 1999 with AC Milan. The Rossoneri are currently two points ahead of city rivals Inter at the top of the table before the last matchday. The former national team captain sees a similar situation to that when he won the Scudetto.

“The parallels are of course there, because Milan came from two bad years in 1998/99 and didn’t go into the championship as favorites. The hunger for the title was correspondingly great and then the joy. You can compare that with the current situation , since Milan haven’t been champions since 2011,” he said. “Of course my heart is beating red and black. I hope that they will take the final step on the last day of the game. And I’m in good spirits.”