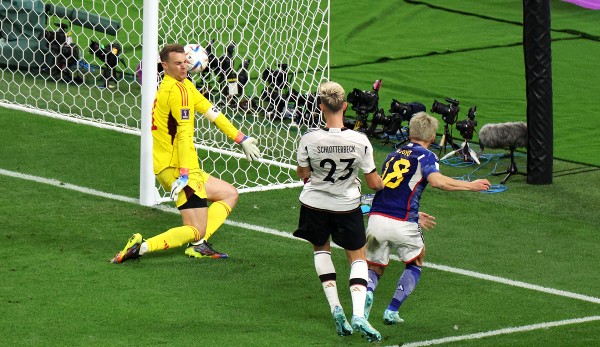 Manuel Neuer not only looks back on a weak 2022 World Cup in Qatar, but also on a changeable first half of the year at Bayern Munich. The advertising arm lowers and the end of a great career becomes more foreseeable. This could very soon become an unexpectedly big problem for the record champions.

When FC Bayern Munich opened the Bundesliga season with a 6-1 firework display in Frankfurt, Germany wondered who should even come close to stopping the record champions. It was an all-round successful start that drew hymns of praise. Even Emperor Franz Beckenbauer spoke enthusiastically. “I haven’t seen such a performance for a long time,” the 77-year-old was told by the picture-Newspaper quoted: “This team is the future.”

But even then there was a scene that at least indicated that the past could soon pose challenges for FC Bayern. It was in the 64th minute when Manuel Neuer received a simple back pass. Frankfurt’s Kolo Muani started aggressively, but was still a good six meters away from the multiple world goalkeeper at the time the ball was accepted. A situation that Neuer has mastered hundreds of times in his life.

In this situation, instead of putting the ball straight back onto one of the two central defenders, the goalkeeper turned right into Muani’s path. He conquered the ball and pushed in to the meaningless 1:5. The goal was irrelevant only for the result. There wasn’t much talk about this scene afterwards. Neuer’s career and legacy are so dazzling that such blunders will be forgiven. A few months later, this scene is possibly the beginning of a big problem that is heading towards FC Bayern.

The World Cup for Germany has just come to an end after the group phase. The DFB team conceded five goals, with at least two of them Neuer not looking good. Against Japan he made himself unnecessarily small by turning his upper body in the 1:2. Costa Rica’s opening goal in the meantime would have been tenable, but the Bayern keeper jumped up like a handball goalkeeper and practically put the ball in the net himself. Those were just the two clear mistakes. Neuer was at least partly to blame for the other three goals conceded.

When Costa Rica scored the first goal, the 36-year-old saved a close-range header. But he seemed unusually sluggish and seemed to have a hard time standing on his feet. Instead of fending off the ball with his legs, he tried bending down with both arms. As a result, he lost control and the ball was deflected forward into the danger zone instead of to the side.

The other goals from Japan and Spain would probably not be chalked up as a mistake for a normal goalkeeper. But Neuer is not a normal goalkeeper. He revolutionized the game between the posts. He has become a role model for an entire generation. The standard applied to him is different. And so the thesis is not far-fetched that he would have conceded at most one of these five goals in an earlier phase of his career.

FC Bayern: Manuel Neuer wobbled even before the World Cup

Now Neuer is not the main factor behind the elimination of the German team. But between the scene in Frankfurt and his unfortunate appearance at the World Cup there were many other games in which he sometimes reinforced the impression that he was past his prime.

The really big mistakes are still rare compared to other goalkeepers. But Neuer is less and less able to parry the famous “untenables” and shows more insecurities than before. He regularly won games for his teams. These days he seemed slow and sluggish compared to previous saves when Youssoufa Moukoko scored in Dortmund or when Dodi Lukebakio made it 3-1 in Berlin. Clear errors? Certainly not. But Neuer wasn’t without a chance either.

So are his days numbered? Don’t write it off too early. Especially since he is still a good goalkeeper, but currently no longer world class. However, there are good reasons why FC Bayern is taking a calm look at the situation and not resorting to activism. The 2014 world champion has fought back several times in his career. For example after his metatarsal fractures, which could even have ended his career. Ahead of the World Cup in Qatar, he was struggling with an unexpectedly protracted shoulder injury that may still be affecting his performances – albeit subconsciously.

Nevertheless, FC Bayern is facing a huge problem, the extent of which he may not yet realize because of the trust he has in Neuer. It’s not just a few goals conceded and the injury that should worry the record champions. Neuer has lost his shine in the build-up game and seems more hectic than before. Ironically, the aspect that made him so unique for several years seems to be disappearing.

On the line he is no longer at the top and even with the ball at his feet he hardly provides any arguments to continue counting him among the world’s best. It’s not that Bayern didn’t try to prevent Neuer’s impending downward trend. But the hope that Christian Früchtl could inherit him is long gone.

Now the name Alexander Nübel is still in the books of the record champion. The ex-Schalke player was signed with great advance praise and, after a long start-up period, seems to have finally established himself in the professional business in France – even at a decent level. But at Bayern level? Rather not.

Nübel is far from becoming a second newcomer – or even coming close. He is too sluggish in the build-up and not special enough on the line. And so FC Bayern is faced with a difficult decision. The only question is when it is due, but there is not much time. Do you make the same mistake as in the time after Oliver Kahn and first experiment with goalkeepers who have not yet proven themselves at the highest level? Is it possible to fall back on an experienced interim solution? Or do you spend a lot of money for someone who is supposed to inherit Neuer directly?

FC Bayern: Stefan Ortega was the chance for more rest

FC Bayern could have made life a lot easier for themselves last summer. With Stefan Ortega, a goalkeeper was available who has a very high basic level at all levels. One who doesn’t rank among the world’s best, but who is very capable of being a solid backbone to a world-class team. He is currently proving that at Manchester City.

Even in Bielefeld he was at times the best goalkeeper in the Bundesliga. Above all, the 30-year-old has technical skills that would have made him the perfect interim goalkeeper. Bayern would have bought time with Ortega that they don’t have with Sven Ulreich. Because he is nowhere near (anymore) the level to represent Neuer over a longer period of time or even to inherit him in the medium term.

It’s no secret that the people of Munich have dealt with Ortega. However, they are said not to have exactly covered themselves in glory when attempting a commitment. And so he went to Pep Guardiola and Manchester City. Now Bayern have two goalkeepers who used to be a good duo. However, both appear to be past their prime.

So while Neuer’s complaint arm is slowly sinking and he is heading towards the end of his career, Bayern need solutions. His time is not up yet, but the end of a great career is in sight. Beckenbauer was right: This team is the future and clever precautions were taken on many levels. But the goalkeeper question could very soon tear an unexpected hole in the squad.