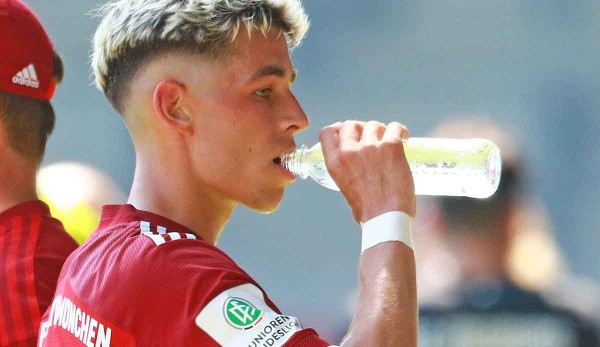 In his young career, Nick Salihamidzic has made it into the headlines more with tweets than with sporting achievements: After his loan to the Vancouver Whitecaps reserve was terminated prematurely, the future of the 19-year-old son of sports director Hasan Salihamidzic is at FC Bayern Munich not clear.

Sometimes Bouna Sarr is referred to as GOAT via emoji, sometimes teased at Robert Lewandowski who had emigrated: Nick Salihamidzic’s Twitter account is quite entertaining. The 19-year-old is primarily concerned with honoring or defending the work of his much-maligned father. Depending on what is required. Sports director Hasan Salihamidzic is known to have a rather difficult position with a number of Munich fans.

Shortly thereafter, he deleted the tweet and made a longer statement: It wasn’t mean at all, he just wanted to highlight his father’s good transfers – after he had been “pulled through the dirt by the media and fans”.

Nick Salihamidzic was present at the reserve training start

Nick Salihamidzic himself went through the youth department of FC Bayern before moving from the Munich reserve to Canada to second-hand for the MLS club Vancouver Whitecaps last summer. “Half a year to get fit, then MLS,” announced the 19-year-old right-back quite ambitiously on Twitter.

Half a year has passed since then: Salihamidzic doesn’t play MLS, instead he’s back in Munich. The loan, which was actually intended to run until the end of 2023, was canceled early in November. He described the change as a “big mistake” in a video on Instagram. Salihamidzic was there when the reserve started training on Monday. His future in Munich, despite a contract until 2025, is unclear, he says he wants to look for a new club in winter.

The reserve’s first game in the second half of the Regionalliga Bayern will not take place until February 24 against table leaders SpVgg Unterhaching. Coach Holger Seitz’s team, who replaced Martin Demichelis, who switched to River Plate in November, is currently sixth. Angelo Brückner was in Salihmaidzic’s right back position in the first half of the season.

The fact that Salihamidzic ended up in Vancouver in the summer was due to the good relations between the two clubs. In 2019, the then 19-year-old Alphonso Davies moved from Vancouver to Munich and, with a transfer fee of ten million euros, became the most expensive sale in the club’s history.

The Whitecaps now have a German managing director in Cologne-based Axel Schuster. Before his commitment in Canada, Schuster worked for FSV Mainz 05 and FC Schalke 04. Thanks to his contacts at home, he has already signed several German-speaking players: in addition to Salihamidzic, for example, Florian Jungwirth, Julian Gressel and Alessandro Schöpf.

They all play for the MLS team, but Salihamidzic only made five appearances for the reserves in the third-tier MLS Next Pro in the fall, where the second-tier teams compete. Salihamidzic started four times as a right winger in a 3-5-2 system, but was substituted each time – once even before the break. Four of the five games were lost, his team missed the playoffs in the fall.

“He struggled with the level in MLS Next Pro and was outperformed by other players at the same position,” says Samuel Rowan of the Whitecaps blog Eighty Six Forever to SPOX and GOALS. “After the season it was clear that he would have few chances to make the first team.”

Even at FC Bayern, which he joined from SpVgg Unterhaching in 2015, there was little to indicate he would make the leap to the professional team before he left. Salihamidzic only played two games for the reserves in the regional league and a few more for the U19s last season. The short playing time was also due to injury problems: He had to undergo nose surgery and suffered from a knee injury.

Salihamidzic actually has plenty of genes for a football career – and not just from his father, with whom he has a close relationship. Nick Salihamidzic’s mother is Esther Copado, the sister of former Bundesliga player Francisco Copado – once active for Salihamidzic’s former club Unterhaching.

Incidentally, Francisco Copado also has a son: 19-year-old Lucas is currently also playing for the reserves of FC Bayern. He was also used for German U national teams. Salihamidzic would theoretically be eligible to play for Germany, Spain and Bosnia and Herzegovina but is still awaiting an appeal.