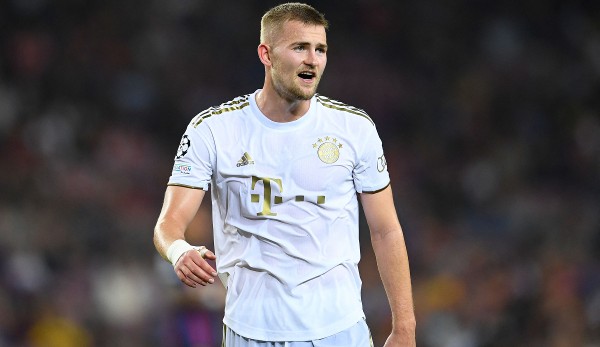 Matthijs de Ligt comments for the first time on his reserve role at the 2022 World Cup in Qatar. Benjamin Pavard continues to be criticized after Didier Deschamps’ recent statements. Here you can find news and rumors about FC Bayern Munich.

Matthijs de Ligt is calm about his bank role for the Netherlands at the World Cup in Qatar. “It’s not that frustrating,” said the centre-back after the 3-1 win over USA in the round of 16. “Of course every player wants to play, but we’re a group of 26 players. To be honest, I’ve already played more than I expected. I was afraid I wouldn’t play at this World Cup.”

De Ligt had played through the opening match against Senegal (2-0) before only making one minute appearance in the following three games. This is due to the “playing style and the type of coaching,” explained the 23-year-old: “It’s okay, I know my role. I train every day to help the team.” He is “happy” because the team is in the quarterfinals.

In contrast to Bayern, the Netherlands plays defensively with a back three. Nevertheless, looking back, de Ligt sees his summer move to Munich as absolutely the right decision. “I’m having a great time. I feel at home after only a few months. I’m very happy,” he said. “The way I played at Bayern gave me the opportunity to play my first game here.”

Benjamin Pavard is currently not having an easy time with the French national team. From the outside there is also a lot of criticism of the FC Bayern Munich professional. “I don’t understand why Benjamin lets himself go so much and his shoulders just hang down,” said Johan Micoud now sports1: “”He’s too busy that he doesn’t feel like playing on the right anymore, he just wants to play in central defence. It makes him restless and broods too much.”

The former SV Werder Bremen playmaker also has a tip for Pavard: “He should understand as soon as possible that he has the privilege of being at a World Cup and do everything he can to help his national team defend the title and accordingly put themselves at the service of the team – without ifs and buts.”

Didier Deschamps actually wanted to use the defender against Tunisia. “Benjamin wasn’t in the right condition to play,” explained the national coach afterwards: “Both mentally and physically, the first game against Australia didn’t do him any good. I’ve had a lot of conversations with him.”

It was only in September that Pavard spoke about suffering from depression about a year ago. “I don’t like the word depression, but it was. I hid it from everyone, but today I’m much better. I came out of it a better person. It changed me,” Pavard said in an interview at the time With Le Parisien.