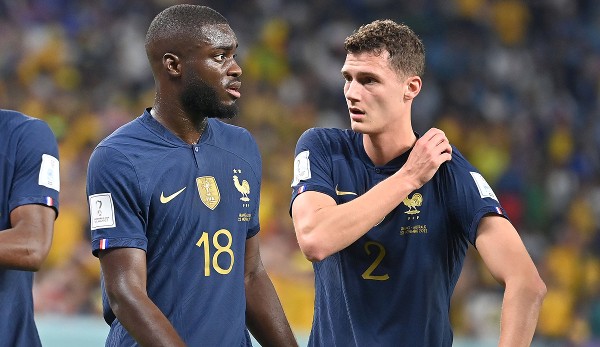 His colleagues in the France national team sing the praises of Dayot Upamecano. Bayern boss Oliver Kahn criticizes the fuss about the “One Love” bandage of the German national team. All news and rumors about FC Bayern Munich can be found here.

Both at FC Bayern and in the French national team, central defender Dayot Upamecano has not made the best impression time and time again in the past. During the current World Cup, however, the 24-year-old is convincing with good performances and confirms his top form at Bayern – which his colleagues also recognize.

“He’s a player with many qualities,” said Raphael Varane, praising the Bayern star’s recent performances. “He lacked a bit of the confidence that he’s gained with the France national team. He’s shown he’s got the ball rolling, you can tell by the way he puts it.”

The French sports newspaper sees the development in a similarly positive light L’team. Upamecano “he finally got rid of the weight that was preventing him from performing in blue. The new Upa seems to have finally arrived,” the paper wrote after the games against Australia (4-1) and Denmark (2-1 ).

In the two previous group games, the central defender was on the pitch for the full 180 minutes and impressed with good performances. “I said before the World Cup that what I’m doing at Bayern, I can do with the French national team,” said Upamecano himself.

FC Bayern, News: Vortex about “One Love” bandage according to Kahn “not beneficial”.

The fuss about the “One Love” armband in the run-up to the Japan game was “certainly not beneficial”, believes FC Bayern CEO Oliver Kahn: “What bothered me was that it was played on the players’ backs it’s clearly the wrong people,” said the 53-year-old Picture TV.

World governing body FIFA “should have entered into dialogue with the associations much earlier,” said Kahn: “The problem should have been solved at this level.” The threat of sanctions had to be taken seriously: “FIFA can be trusted with anything!”

The German national team had originally planned to wear a “One Love” captain’s armband for Manuel Neuer at the World Cup opener against Japan. When FIFA issued a ban and threatened sporting sanctions, the DFB rejected this plan.