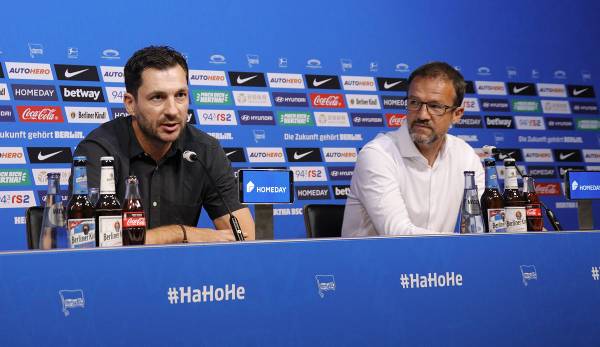 Sandro Schwarz is supposed to stabilize Hertha BSC after the rescue in the relegation.

Berlin (SID) Sandro Schwarz does not go sightseeing in Berlin – time is short, duty calls. There is a lot to do in his new home. The Hertha BSC coach arrived in the capital on Saturday and got to work straight away. “It is our aspiration to be very intense and diligent, to do, to work from day one,” said Schwarz at his presentation on Monday.

Discussions have been held with the staff and trainer team, and the training grounds and infrastructure have been inspected. On Wednesday, the umpteenth new start at Hertha really begins with the start of training. “It’s a very challenging task that I’m really looking forward to,” said Schwarz.

The 43-year-old, who gained Bundesliga experience at FSV Mainz 05 and last worked for Dynamo Moscow, approaches the task with a clear game idea. As in his previous positions, he wanted to play “very actively”, establish a “good structure against the ball” and “play boldly and purposefully forward”. “Diligence” and “order” were qualities that he emphasized again and again, that he wants to demand and exemplify.

It will take time and patience to establish his preferred style of play, which proved to be congruent in discussions with managing director Fredi Bobic. The squad shouldn’t be in place until August, the team is anything but solid after almost relegation.

The time of dreaming at Hertha is therefore over. At the latest after the hard-fought league in the relegation, nobody talks about excessive goals such as entering the European Cup. The economic situation also contributes to this: Hertha has to budget, almost all of the original millions from investor Lars Windhorst are gone.

“We have to do something, we also have to earn money. We will have to reduce the staff budget,” said Bobic: “We are trying to earn more money than we spend.” Eduard Löwen and Santiago Ascacibar are about to jump. Spokesman Kevin-Prince Boateng, on the other hand, should stay.

Black is impressed by the 35-year-old, whose contract extension is to be announced in the near future. In the conversation, Schwarz and Boateng quickly found a level. “It was open, clear and honest from both sides. It’s a good basis to continue working together,” said Schwarz.

Born in Berlin, Boateng also serves as a figure of identification for the fans. And he should help shape the style of play. Recognizing this is the most important goal of the season. “If our viewers and fans see that this is a Hertha team,” he would be satisfied with the season, said Schwarz.