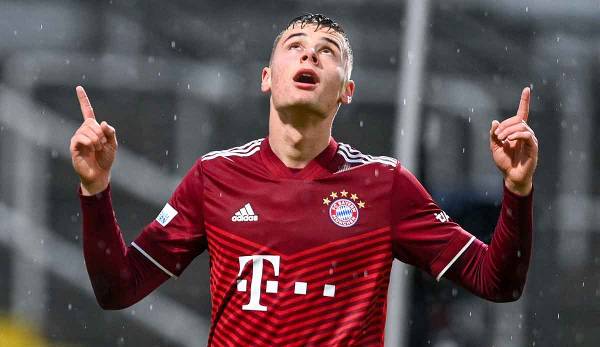 Gabriel Vidovic is considered one of Bayern Munich’s greatest young talents. How does the 18-year-old tick? Vidovic has been commuting to Munich for six years, once he had a special visit from Croatia and Diego Simeone should like him.

An offer from Bayern Munich? You can’t refuse that as a young boy! It’s an opportunity that will never come again. But that didn’t really matter to the Vidovic family, well. Son Gabriel was to remain in Augsburg for the time being, where he played in the youth team for FCA and attended a partner school. There, where he knew the people and the distances were short.

“Before Gabi switched to Bayern Munich in 2016, we had already rejected two requests,” says his mother Marijana Vidovic in an interview SPOX and GOALS. “The second time we didn’t even ask Gabi. As parents, we decided that it was still too early for him.” Only later did they tell their son about it. Outburst of anger is transmitted to no one, he understood it.

All good things come in threes anyway: At the age of twelve, Vidovic joined the record champions from the state capital in 2016. Vidovic didn’t come to Munich alone, he was part of a small Augsburg invasion. His coach Alexander Moj and teammates Behar Neziri, Micha Bareis and Lasse Günther also joined FC Bayern with him. Neziri is currently playing for the reserves, Bareis at FC Memmingen and Günter back at FCA. Vidovic, on the other hand, is now a permanent member of FC Bayern’s professional team.

Last season, the offensive all-rounder collected 31 points in 30 regional league games for the reserves before coach Julian Nagelsmann helped him to his first three Bundesliga appearances in the final phase of the season. Vidovic is considered one of Bayern’s greatest young talents and has already signed a professional contract until 2025. These are the first successes for which he had to travel long distances as a teenager.

About 40 miles to every practice session and game, to be exact. After his move, Vidovic did not move to FC Bayern’s boarding school, but stayed in his parents’ house and commuted to Munich. “He had very long days,” says Marijana Vidovic.

He left for school at seven in the morning, where a parent picked him up in the afternoon and hurriedly drove him home. The FC Bayern driver was already waiting there, taking him to Munich for training and later home again. Food was in Tupperware boxes. Once sated, the remaining driving time was dedicated to learning. He was usually back around nine-thirty in the evening, and occasionally homework still had to be completed.

After the 10th grade, Vidovic switched from high school to FOS, which he interrupted last summer after the first of two years. Theoretically, he could still catch up on his Abitur, but first of all: full focus on football! To this day, Vidovic lives in his parents’ house in Augsburg. Since his 18th birthday six months ago, he has at least had his driver’s license and is no longer dependent on FC Bayern drivers.

“Many talents are put under pressure too early by their parents, friends, advisors or sponsors,” said reserve coach Martin Demichelis SPOX and GOALS. “That’s not the case with him. He’s a very down-to-earth young man.” Young boss Jochen Sauer also praises: “Gabi comes from a good family. He is well brought up and polite, and also brings a certain humility with him.” In addition to these character traits, Vidovic’s passion for football is family-related.

Although his parents come from what is now Bosnia and Herzegovina, they are of Croatian descent. In the course of the Yugoslav war, they came separately to Augsburg in the early 1990s, where they met in 1995. Vidovic’s father Zoran had previously played for the Croatian second division club NK Spansko Zagreb, in Germany he was active in the Bavarian lower house for NK Enikon and the then rather insignificant FC Augsburg. His younger brother Mladen made it into the second Swiss league.

Gabriel was born in Augsburg in 2003, soon emulating his father and uncle. “Even at the age of two, Gabi only played with balls. All other toys didn’t interest him. As a child and teenager he had no other hobbies than football,” his mother remembers. Favorite player: Lionel Messi. Favorite club: FC Bayern.

At the age of six, Vidovic joined FC Augsburg and “when there was no training, he trained with his dad on the soccer field next to our house. The rest of the time he played inside. I like decoration – but every new vase broke after a few days shot.”