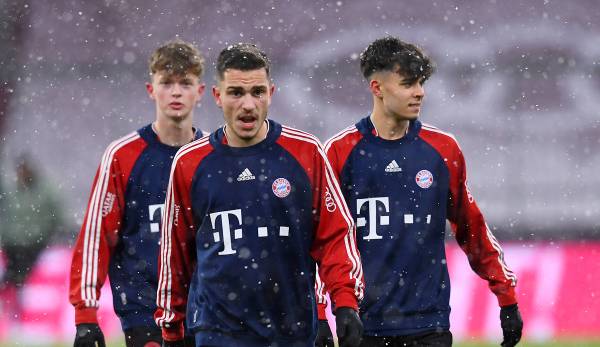 Florian Wirtz, Jude Bellingham or Jamal Musiala – the list of players who have made their big breakthrough in the Bundesliga in recent years is long. In the shadows of these players, however, there are many talents that have been little talked about. SPOX and GOAL look at nine top-class names to remember for the coming months and years.

Born in Nuremberg, he is no longer so well known simply because of his last name. Nevertheless, relatively little is written and spoken about him, although he brings great talent. That’s why he regularly trains with the pros. The fact that he was overshadowed by Paul Wanner shouldn’t be too bad for his development.

Because the constant comparisons with namesake Zlatan do not do justice to his player profile and could also lead to the pressure becoming too great at some point. The 16-year-old was directly involved in twelve goals in 15 games for Bayern’s U19s this season. He is fast, good at dribbling and brings the train to the goal with him. He “is a very good offensive player who has his qualities in offensive one-on-one, who can dribble well,” said Nagelsmann at the beginning of the year when Ibrahimovic was in the professional squad against Gladbach.

Precisely because he is a player who is always looking for depth, he should become interesting for many Bundesliga clubs in the medium term. He can play in either wing position, but is also comfortable on the ten, which should also put him on the list of clubs.

But the most important thing is that for such a young player he seems very mature in his actions. Technically, there are many in this age group who are on a similar level to Ibrahimovic. The difference, however, often lies in the reliability when it comes to making the right decisions. The 16-year-old does it regularly on the pitch.

Whether that is also the case off the field will be decisive for his future path. In the second half of the season, his development at the U19s stagnated a bit. In addition, he came more often from the bank – sometimes for disciplinary reasons, it is said from the environment.

It remains to be seen to what extent the name or the growing pressure will influence his career in the coming years. Nevertheless, he should be one of the names that will most likely be read more frequently in the Bundesliga very soon.

Tibidi was born in 2003 and is now entering the critical phase of his young career. He has already proved himself in 13 competitive appearances with the professionals at VfB Stuttgart, but he has yet to score a goal. In any case, his development seems to be stagnating a bit.

As with Gechter, it also applies to the 18-year-old that his environment is not easy. Not much works at VfB and it’s a big challenge for a young player to integrate. The Frenchman came from Toulouse on a free transfer at the start of the season.

He is actually a trained centre-forward, but he has been used in all offensive positions for VfB so far. Because of his pace and his strengths in one-on-ones, the right-footed player can be used flexibly. Tibidi first came to the U19s of VfB, where he was directly involved in eleven goals in twelve appearances. That gave him several substitutions with the pros and even two starting XI appearances.

After this good phase in the winter and an appealing performance after coming on in Leverkusen, Tibidi was demoted again. For disciplinary reasons, as revealed by head coach Pellegrino Matarazzo. According to information from kicker, the three-time U17 national player of France was late for training.

That brought him a four-day break. In the last few weeks, however, he has been used more and more. So far, however, there has been no real explosion in performance. Tibidi neither falls on nor falls off. This is good for young players and not at the same time. Because the question will be whether he can soon take the next step in order to get stuck in the Bundesliga in the medium and long term.

The potential he was once said to be a top striker lies dormant in him. Apparently, a lot has to do with his attitude. “He’s a young player who isn’t malicious, but also gets carried away from time to time,” Mattarazzo said of the disciplinary incident: “It’s about protecting the team and educating the player a bit so that he’s in the professional business in the long term can be.” Tibidi seems to have yet to go this route.

Moriba came from Barcelona with such great advance praise that it is almost surprising how quiet things have become around him. Because his debut season at RB Leipzig is anything but good. The 19-year-old came from FC Barcelona last summer for a whopping 16 million euros. After the first half of the season he was loaned back to Spain to FC Valencia.

He only played six competitive games for the Saxons, totaling only 100 minutes. It was a disappointing start for the midfielder who had big plans. “I am convinced that Leipzig is the ideal next step for my career and further development,” Moriba said when he moved to Germany.

After all, things are going better for him at FC Valencia. He was used in 14 competitive games and sometimes knew how to convince. It seems like he’s thawing again in Spain.

Even though his career has suffered a small setback, his potential is still great. Moriba is a very athletic midfielder who creates advantages in the center mainly through technical skills and his positional play. His aggressiveness in pressing also fits well with the philosophy of RB Leipzig.

The fact that Domenico Tedesco was not able to make more appearances could also be due to personal differences. In the winter reported the picturethat a coherent team is important to the coach and that he cannot do anything with dissatisfied players like Moriba. Accordingly, it is possible that the expensive newcomer will remain on loan beyond the summer.

However, Valencia should not have a purchase option. Accordingly, Moriba should not be ignored as a great talent in the Bundesliga. The path has certainly become longer for him, but in purely sporting terms he has all the abilities to play regularly for a top club in Germany. In any case, its further development is worth observing.