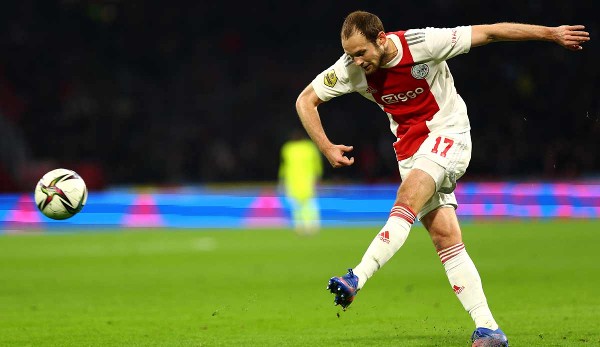 FC Bayern Munich manages a small transfer coup with the commitment of Daley Blind. In view of the numerous failures on the defensive, the 32-year-old could indeed be a perfect backup – a closer look at his data proves this.

Before leaving for the training camp in Qatar, sports director Hasan Salihamidzic gave a mischievous smile when the name Daley Blind came up.

“It’s really fortunate that such a player is on the market,” Salihamidzic commented on the Dutchman’s commitment sky. “He signaled to us from the first minute that he really wanted to come to Bayern. We found a good solution.”

Blind landed in Munich on Thursday and signed a contract until the end of the season. Since his contract with his heart club Ajax Amsterdam was terminated at the end of the year, the 32-year-old was available on a free transfer.

“Due to Lucas Hernández’s absence, we looked around and found a really good player,” said Salihamidzic. Blind can play both as a left-back and as a central defender and as a left-footed player is an adequate replacement for Hernández, who will be out for months with a cruciate ligament rupture. But what specifically distinguishes Blind?

First and foremost, his passing skills should be mentioned, which means that the 99-time Dutch international can also be used as a game-building six. Thanks to his routine on the ball, Blind was a sought-after pass at Ajax. According to data from CreateFootball was played blind 65 times per game – top value in a European comparison.

A more detailed analysis of his passing quality shows his value, which can also be good for Bayern’s game. In the past calendar year 2022, Blind is the second most frequent passer with an average of 84.2 passes per league game compared to the five strongest leagues in Europe, only Marco Verratti (91.1 passes/game) was an even more diligent distributor of the ball. Incidentally, Blind also leaves passing machine Toni Kroos (84.0 passes/game) behind.

What is particularly striking is Blind’s offensive orientation in his passing game. With 39.2 vertical passes per game, he has the most in a Europe-wide comparison, ahead of his compatriot Nathan Aké from Manchester City (34.9 passes/game). In addition, Blind played the most passes into the attacking third on average (18.2 passes/game) – even more than Kroos (16.5 passes/game).

His passing quality comes into its own with a dominant style of play, as practiced by Ajax in the Eredivisie. Bayern’s style of play, which is also geared towards dominance, should therefore accommodate blind. “He has great international experience and leadership qualities. I’m sure he will help us,” said Salihamidzic.

Blind is considered a communicative player with great tactical understanding, who in this respect can also be a good mentor for his former Ajax team-mate Matthijs de Ligt or for regular left-back Alphonso Davies.

“I hope I can use my experience to help the team and I will give everything for Bayern Munich,” said Blind, for whom “the hunger for titles” was the decisive factor in his signature.

FC Bayern: Daley Blind was the slowest defender in the Eredivisie

Due to his lack of speed, Blind cannot be counted as a left-back of the most modern type, who sprints down the wing and throws one cross after the other into the penalty area. Only two cross attempts per game are proof of his harmlessness, and since 2015 he has only managed a manageable eleven assists in the Eredivisie. His introductory passes mentioned above are more valuable.

Blind makes up for his lack of speed with his good positional play. This also helps him in the center of defence, because with his height of 1.80 meters he doesn’t necessarily have the right size for a central defender. On the ground, Blind won almost 70 percent of his duels in his career – a strong value that underpins his cleverness in his defensive work. He avoids aerial duels, which could be a weak point in central defense.

In summary, it can be said that the blind can be an important factor in Bayern’s game, mainly because of the quality of the pass. As a left-back without much of an offensive drive of his own, he is likely to appear primarily as an initiator. Blind also seems suitable for the left part in a chain of three, which coach Julian Nagelsmann occasionally plays when he owns the ball.

Blind could again reach his limits against powerful and fast opponents and possibly become a risk factor in the round of 16 cracker in the Champions League against the star offensive from Paris Saint-Germain with Kylian Mbappé, Lionel Messi and Neymar.