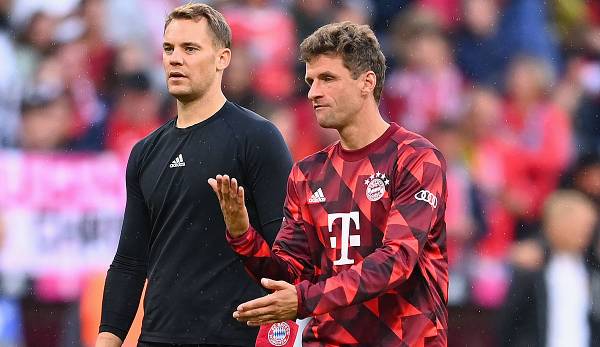 Thomas Müller demands the timely conquest of the top of the table. Manuel Neuer is ready for Hertha BSC and the World Cup. And: The second team of Munich slips up. Here you can find news and rumors about FC Bayern.

FC Bayern, News: Müller with a declaration of war

FC Bayern is still only second in the Bundesliga behind Union Berlin. If Thomas Müller has his way, this situation will change in the three remaining game days before the World Cup break. “Our goal is to be top of the table again before the World Cup break. It’s important for the club that we finish the first chapter of the season positively and are at the top of the league. That’s where we belong,” wrote Müller in his monthly newsletter.

Most recently, the Munich team won seven competitive games in a row. “In the last few weeks we’ve had one of the best phases in a long time. The results were good, but more importantly, our performance has also steadily improved,” said the 33-year-old, who is currently struggling with hip problems.

“We created a lot of chances and used them efficiently, defended passionately, conceded a few goals and played our own game with confidence,” Müller continued: “We were able to achieve what everyone was talking about after Lewy left. Who’s going to shoot them now? Whole goals at FC Bayern? Answer: all!”

The offensive player has played in 15 competitive games this season. He scored three goals and prepared six more goals.

After the surprising resignation of Barcelona star Gerard Piqué, Müller also spoke up. “You have always been a tough opponent and a great sportsman. A champion and a legend of our game. Thank you!” the native of Weilheim wrote on Twitter.

Manuel Neuer will return to the Munich team in the game at Hertha BSC (3.30 p.m. in LIVETICKER). “I’m fine. I did the first team training, everything was fine,” said the goalkeeper in a video published by the German record champions on Friday evening.

The 36-year-old had to sit out the last six games due to a shoulder fracture. With a view to the World Cup in Qatar, Neuer gave the all-clear: “Of course things are looking good for the World Cup.”

FC Bayern, News: Only one point for the second team

FC Bayern’s reserves did not get past a 1-1 draw against VfB Eichstätt in the fourth-tier Regionalliga Bayern on Friday evening. Hyun-ju Lee (11th) gave FCB the lead, Johannes Golla (44th) equalized.

“Today we lost two points. We were the better team, but in the end we have to score the goals,” coach Martín Demichelis said afterwards.

In the 20th game of the season, the Munich team did not leave the field as a winner for the twelfth time. Bayern II is fifth with 29 points.