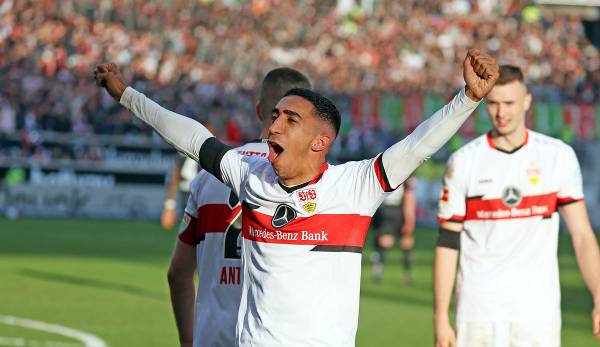 In the fight to stay up in the league, winter new signing Tiago Tomas at VfB Stuttgart is increasingly emerging as a trump card and king transfer. Sometimes the 19-year-old even trumps Robert Lewandowski.

The 85th minute had started on the scoreboard when Tomas triggered ecstasy in the more than 50,000 spectators in the Mercedes-Benz Arena, reared up in front of the escalating fans in the Cannstatt curve and let himself be celebrated. The Portuguese kept his nerve in a wild final phase and crowned the Swabians’ next race to catch up with his goal to make it 3-2 against FC Augsburg.

A clear exclamation mark in the direction of the other clubs threatened with relegation. During the international break, VfB greeted them from a non-relegation zone for the first time since matchday 18 (14th). The Fuggerstadt team, on the other hand, slipped to 15th place, while Hertha (16th) pushed Bielefeld down to 17th place.

“He’s got speed, depth, is able to use his body very well and can be disgusting when he’s holding the ball,” enthused coach Pellegrino Matarazzo of the match winner after the all-important win over FCA. Tomas is on loan from Sporting Lisbon until after next season. Sports director Sven Mislintat, who had once again impressively demonstrated his golden hand in the transfer of young players, praised: “He has shown what an important newcomer he is.”

The always critical VfB supporters were worried about the impending third relegation within six years after it became clear that the squad would not have any other player besides 19-year-old Tomas. The 13 scorer points in 66 games for Sporting did not indicate a savior in the relegation battle. In addition, he hardly played a role in Lisbon in the first half of the season.

Tomas is the face of the Stuttgart upward trend

“What use is it to me if he’s experienced but doesn’t bring the quality? We’re on a very, very limited budget,” Mislintat explained his activities on the transfer market some time before the deal was announced and pushed – as the Coincidence wanted – after: “I don’t care if he’s 19 or 28.”

A few months later, Tomas is the face of the Stuttgart upward trend. The Stuttgart team scored a strong seven points in the past three games. Before his arrival, Matarazzo’s side had scored just five striker goals, and after seven appearances the Portugal U21 international is the only one with three goals in the Bundesliga.

In addition, the long-injured Sasa Kalajdzic and the Wolfsburg loanee Omar Marmoush (each with three goals this season) benefit from the lightning-fast and dribbling attacker, who creates the much-cited spaces for his colleagues and often plays opening balls.

However, it is not Tomas’ ball security or creativity that amazes the most, but his outstanding efficiency. He needed ten shots on goal for his three goals, so on average he only needs 3.3 shots to score. He is more accurate than Europe’s top scorer Lewandowski, who with his 31 goals this season has a quota of 4.3 attempts. With a top speed of 35.6 km/h, Tomas also set a club record for the season against Augsburg.

In view of Tomas’ extraordinary skills, it is not surprising that VfB has secured a purchase option for a reported 15 million euros. Should Mislintat actually put this sum on the table, he would ensure the most expensive transfer in the club’s history.

According to the current status, a conceivable scenario should there be sufficient financial resources. Tomas would probably not fail to stay. The 1.80 meter tall offensive player was immediately hooked on his new club.

“I haven’t played that much this season. When VfB showed interest, I liked the idea,” he said shortly after moving from Lisbon to southern Germany. Stuttgart is “a big club” and has “no longer held the place it deserves” in recent years. He feels “honoured to play at such a big club.”

Tiago Tomas stays in Stuttgart even with relegation

The fact that he switched from a title contender and Champions League round of 16 in the middle of the relegation battle did not unsettle him at any time. That’s why he didn’t reveal whether his contract would last in the 2nd division. He doesn’t talk about it, he explained. However, that is not necessary because Stuttgart holds the class anyway. “I’m convinced of that,” he clarified.

VfB have “enough quality to get out of there. It won’t be easy, but I’m sure we can do it. We’re not relegated,” said Tomas, showing the fighting spirit that he embodies on the pitch week after week .

As the jubilant scenes and reactions after the recent victory have shown, it is not only Stuttgart’s new trump card that is no longer a concern. After all, VfB has the relegation in their own hands again.