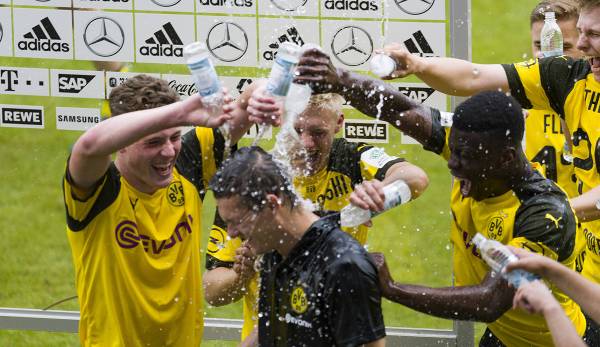 Sebastian Geppert has been working in Borussia Dortmund’s youth division since 2013. Last year, the long-standing coach of the U17s became known to a broader public when Edin Terzic made him assistant coach with the BVB professionals.

In an interview with SPOX and GOAL, Geppert talks about his six months with the first team, which was crowned by the DFB Cup victory and qualifying for the Champions League, which was no longer thought possible.

The 38-year-old also talks about his long-standing friendship with Terzic and explains how he came to BVB and how he found his job as a U17 coach out of nowhere.

Mr. Geppert, you were born in Wanne-Eickel and once played for two and a half years from the U15 to the U17 at Borussia Dortmund. Why weren’t you taken on there, so you switched to SG Wattenscheid 09?

Sebastian Geppert: I anticipated my exit and switched in the winter because Wattenscheid wanted me earlier and good youth work was done there. It was clear that it would be over for me at BVB in the summer. I played with David Odonkor, Markus Brzenska and Daniel Gordon back then and played a lot in the first two seasons, but not with the U17s anymore.

What is the relationship you have to BVB?

bumped: I’m a fan since I was small, I have the jerseys wished happy birthday and all the games looked. I was also irregular in the stadium. In 1997, I celebrated with my father and two mates the Champions League victory on the Borsigplatz. Before I went to BVB, I stood with another club shortly before making any commitment. One day later the Dortmunder called me suddenly, that was for me the hammer. I then completed a trial on clay and given absolutely everything. After that, they wanted to have me – a dream!

You stayed in Wattenscheid for four years, later you played for DSC Wanne-Eickel, ASC 09 Dortmund and SV Sodingen. Is it true that you suffered a serious injury on your 20th birthday that slowed you down a lot?

bumped: Yes. That was already at senior level in Wattenscheid, we played in the two-pronged 3. Liga. It happened at an indoor tournament in Paderborn, since I got from a bad dead leg. Three days later, it caught me again in training in the same place. As the blood then ran out just like that. At the end of the quadriceps tendon was almost completely torn.

How much did you have your sights set on a career at a higher level?

bumped: When I was a little boy, I definitely wanted to be a professional player, I spent my entire youth on the soccer field. Due to the injury I slipped from the 3rd to the 5th league. It was difficult to get out of there – especially since the best football age back then was 28 and not 19 like today. I finished school and started my studies. If I hadn’t injured myself and if the first team hadn’t been relegated this season, it might have been a league or two higher.

You also met Edin Terzic in Wattenscheid, with whom you played for one season and later together in the university team. From 2006 you studied sports science with a focus on diagnostics and training in Bochum and graduated with a master’s degree. What did you want to do professionally?

bumped: I always had to do with football, but no concrete career aspiration. For example, I have worked for the data service Impire. I was out and about in many stadiums to collect game and run data and to create tactical analyses. In addition, I led a few training camps in and during university to see how it feels to work as a coach.

In 2012, at the end of your studies, you spent a season playing assistant coach in Sodingen because a friend of yours was the head coach there and needed help. When will you have the will to pursue a career as a coach?

bumped: I got my first coaching license with the C license in 2008, simply because I thought that might be an option. Three years later I added the B and A license and dealt with it more and more intensively. In Sodingen I was really active for the first time and could not do much. What came next, however, was not foreseeable.

Then came July 2013, you became assistant coach of the newly founded Dortmund U16 for two years – first under Terzic, after his quick move to Besiktas finally under Christian Flüthmann. How did that happen?

bumped: Edin and I were basically in constant contact and got along well. When he was supposed to be looking for an assistant coach, he called me. We met and quickly agreed. Shortly thereafter I sat at the table with my former idol Lars Ricken and signed a contract. I had one or two other jobs on the side, but got a permanent position after a year.

How was it for you to be on the training ground for a renowned club for the first time?

bumped: I was really nervous, but also curious to see how the training work with 14 to 16-year-olds works. The level in this area has increased tremendously in the ten years since I’ve played there. I had a lot of fun from the first second. I immediately noticed: This is absolutely outstanding!

In addition to being the assistant coach of the U16s, you are said to have also worked as a scout and analyst for the professionals.

bumped: That’s true, although I have scouted the first year exclusively on the German youth. This has then shifted more towards professionals, as was required. Sven Mislintat was then chief scout and sent me two and a half years throughout Europe for new talent to be found. I’m incredibly traveled a lot. It often went seven days a week and was really intense and exhausting, but it was a great job.

You are said to have already decided to continue working as a scout before you came to the child like the virgin in 2016 and took over the U17s. How did that go?

bumped: I had the option to do more scouting and quit my job as an assistant coach. It would have been the next career step. Basically, that was already clear, but not yet officially lashed. About six weeks after my decision called me at once Lars Ricken on. Where am I, I should come – now. I was just at a training course for trainers.

The post became vacant because U19 coach Hannes Wolf switched to VfB Stuttgart and the previous U17 coach Benjamin Hoffmann took over his team.

bumped: I had no idea what was going on and expected me. Lars, Edwin Boekamp, ​​Hannes and Benni then sat there and explained to me that I would now take over the U17s. I had to swallow first because I had previously convinced myself with a list of pros and cons how much better the job of a scout is compared to that of a trainer. (laughs)

You once said that decision was made for you quasi. Say to think there was not, rather a fait accompli?

bumped: Yes. It said: This is a decision for the club, we want you to do it. Let’s see how the season goes. They did it very skilfully and softened me up nicely – fortunately, as I now know. Two days later I led the first training.

As head coach, you suddenly had a lot to do, great responsibility and little preparation time. Which unfamiliar topics did you then have to deal with?

bumped: Everything just came together, especially since I didn’t have an assistant coach in the first four weeks. Above all, I had to make a lot of different decisions: How do I explain to the player that he is not playing or not in the squad? What and how long do we train, which focus do I set? It also started with interviews with parents and counselors. And internally I had to be more present than ever in the meetings.