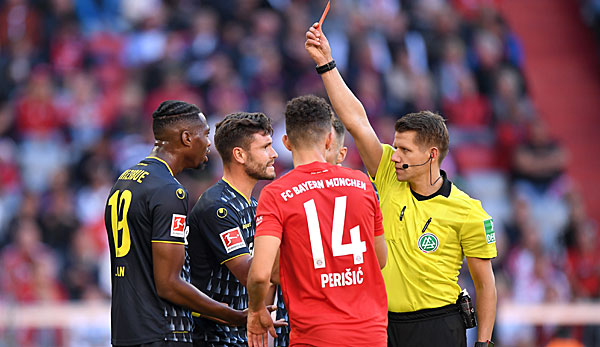 The double penalty is one of the most controversial rules in football. But since the 2016/17 season, multiple punishments have come to an end – at least in theory.

You’ve seen it many times: someone fouls their opponent in their own penalty area, causing the opponent to take a penalty and getting sent off on top of that. It is not uncommon for the penalty kick to be converted.

What is double jeopardy?

Double or triple punishment is a combination of sanctions in football.

A foul in the penalty area, which is defined as an emergency brake and prevents a clear chance to score, can not only result in a penalty (1), but also a red card (2) and the subsequent suspension (3).

Emergency brake: when is yellow, when is red, when is a penalty kick?

Until the end of the 2015/16 season, the answer to this question was: An emergency brake always gives a red. There are also penalties in the penalty area.

Since the 2016/17 season, however, there has been an exception: If there is an emergency brake in your own penalty area, the referee can sometimes show a yellow card instead of the red – but there is still a penalty.

Which fouls only result in a yellow card?

A yellow card is applicable in the following cases:

What Counts as an Emergency Brake: Definition

First things first: It doesn’t count (contrary to popular belief) whether the fouling player is the “last man” – i.e. closest to the goal line.

By definition, an emergency brake is “preventing a clear scoring opportunity by breaking a rule”. The position of the ball and the player are of course clues, but ultimately the referee decides on the basis of factual decisions whether there was a clear chance to score at the moment the rule was broken.

What is a factual decision?

The decision-making authority over yellow or red lies with the referee, who decides on the basis of factual decisions. The crucial question here is whether, in the opinion of the referee, the fouling player could have gotten the ball at all in accordance with the rules. If not, a foul is always punished with red and penalty.

“Factual decision” here means that the impartial decision is made at the appropriate moment from a subjective point of view – but is regarded as fact from the moment of the decision. A subsequent change (e.g. after the game) does not take place.

Can the video referee intervene in the event of an emergency brake?

The video assistant can only intervene if the chief referee has clearly misjudged a game-changing situation.

If a decision is disputed (and factual decisions are usually the case), the VA does not interfere – even if the umpire’s decision tends to be wrong. In practice, therefore, the OB does not play a major role in double punishment.