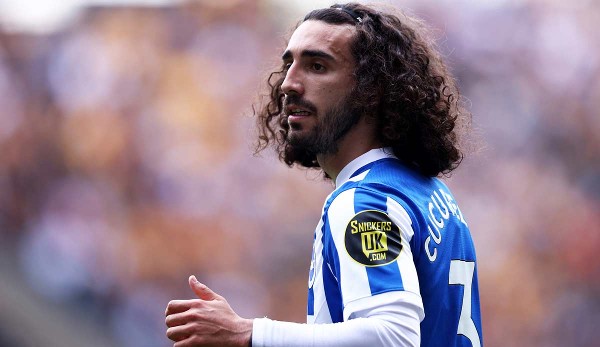 Brighton & Hove Albion shocked Liverpool FC at the weekend. But the Seagulls from the south coast of England are not only doing a good job on the pitch, the underdog is also clever on the transfer market. Best example: Marc Cucurella’s record departure. World champion Alexis Mac Allister could soon follow.

With investments of a little more than 51 million euros, there was still a whopping profit of over 62 million euros left at the end. This puts Brighton in the top 10 in an international comparison.

SPOX takes a look at select Seagulls transfers and their strategy telegraph succinctly put it in a nutshell: “Buy cheap, develop, sell expensive.” But there is something more behind it.

The left-back was trained at Barcelona’s famous talent factory La Masia but the Catalans didn’t believe he was capable of making a big breakthrough. Only with a loan to SD Eibar in 2018 did his rise gradually begin, even if the omens were not particularly promising.

“He’s not fast, he’s not particularly strong. You can’t find all the things that you can measure with him. You would never sign him,” said Eibar’s coach at the time, José Luis Mendilibar, about Cucurella: “But he is a soccer player.”

A year later he moved on to Getafe, where he increasingly attracted the attention of international scouts. Burnley FC first took notice of him from the Premier League, but Brighton’s coach at the time, Graham Potter, convinced the Spaniard to move to the Seagulls in the summer of 2021. In Potter’s powerful team, Cucurella continued to develop. In 2022, Chelsea made Cucurella the most expensive left-back in the world with a transfer fee of 65.3 million euros. He is now also reunited with his former Brighton coach Potter at the Blues.

The defender caught the eye of youth academy scouts when he was sorted out at Southampton FC as a 16-year-old. White was trained in Brighton youth, gained experience on loans to lower-tier English teams (Newport and Peterborough). His breakthrough finally came at Leeds United in the 2019/20 season when Marcelo Bielsa’s team managed to get promoted from the second-tier Championship to the Premier League.

White returned to Brighton and became chief of defense there as well. The reward: The defender made his debut for the English national team in the summer of 2021. He was also part of the squad at the European Championship, but was not used.

Arsenal then sold him for almost €60m, Brighton’s record sale at the time. With the Gunners, White is now also an integral part of the regular formation, but there he is used as a right-back.

Spurs are said to have been interested in the classic box-to-box player when he moved from France to England. But the Mali international opted for Brighton, where he matured in central midfield.

Last summer, the Spurs got him on the second try, but had to dig much deeper into their pockets. And any bonus payments can even increase the transfer fee to 35 million euros.

The Norwegian is an example of how Brighton’s plan to develop players doesn’t necessarily have to be centered on their own team. Because the Norwegian has not played a single professional game for the Seagulls in the four years that he was under contract with Brighton. Instead, the centre-back has been loaned out several times, first to St Pauli, then to Coventry, to Stoke and finally to Genoa.

And with the deal with Naples, Brighton beckons another rain of money: three million euros could be added to the transfer fee through bonus payments. In addition, the southern English secured a stake in a possible resale.

Few knew the midfielder before Argentina’s World Cup triumph, but now everyone is talking about him. The fact that Mac Allister found its way to the south coast of England is due to Brighton’s focus on the South American market. how The Athletic writes, club boss Paul Barber and former chief scout Paul Winstanley have traveled the South American continent several times in recent years to intensify contacts and learn about the peculiarities of the market.

Thanks to the good reputation Brighton have built there, they managed to sign Mac Allister in January 2019 but let him mature even further in his home country with loans to Argentinos Juniors and Boca Juniors. He has only been playing for the Seagulls in the Premier League since 2020 – and could now become the next big top sale. A sale could bring in 40 to 50 million euros.

Boss Barber was relaxed in December with Mac Allister, who was tied until 2025. He hopes to keep the player for as long as possible, Barber said.

The midfielder is proof that Brighton’s scouts not only scout in the big leagues in South America, but also look to Ecuador. After a loan to Belgium, Caicedo made his debut at Brighton last year.

In October it was said at Mirrorthat the Seagulls would only let the 21-year-old Ecuadorian international go for a fee of 99 million euros. Caicedo is unlikely to bring in that much, but Brighton would like to have 55 million euros. In any case, there is a lot of interest in the Premier League competition. Chelsea and Liverpool in particular are said to have targeted Caicedo.

The Belgian, who scored three goals in the 3-3 win over Liverpool in the first leg, was not in the squad for the second leg last Saturday (3-0). The reason: a quarrel with coach Roberto De Zerbi, who publicly criticized Trossard’s attitude after returning from the World Cup break.

Trossard apparently wants to leave. According to The Athletic However, a first offer from Spurs of 13.5 million euros was rejected. Understandable, after all, Brighton would be reluctant to lose on a deal. Especially since that doesn’t fit into the picture of the usual transfer deals.

The Seagulls also received proper financial compensation for the sudden departure of their successful coach to Chelsea in September 2022. According to BBC Around 24 million euros were paid for Potter and his assistants Billy Reid, Björn Hamberg, Bruno, Ben Roberts and Kyle Macaulay, who accompanied him to London.

In November 2022, the previous head of scouting at Brighton, Paul Winstanley, also made the move to Stamford Bridge. However, it is unlikely that Brighton’s transfer model will now collapse. After Winstanley’s departure, Sam Jewell, who had been at Brighton since 2016, was promoted. Like Winstanley, Jewell also has a soft spot for the South American market. In the scouting department, former Atlético star Pablo Ibáñez has also mainly covered the Spanish-speaking area since 2015.

Otherwise, Brighton’s focus is sometimes far away from the big top leagues in Europe. Offensive player Kaoru Mitoma was spotted in Japan. Enock Mwepu, who had to end his career prematurely due to heart problems, once came from the Austrian series champions Salzburg.

When it comes to scouting, Brighton also relies on a worldwide player data model from club owner Tony Bloom, who has also made a name for himself in England as a professional poker player. “The Lizard”, as Bloom is also known, has also held the majority stake in last year’s Belgian surprise team Royale Union Saint-Gilloise since 2018.