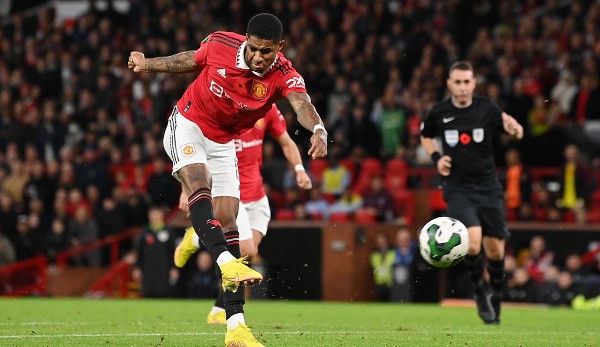 The round of 16 of the League Cup has been in full swing since yesterday, with Manchester United hosting Burnley FC today. Where you can watch the game live on TV and Livestream? Here’s the answer.

Penultimate game in the round of 16 of the Carabao Cup: Manchester United welcomes Burnley FC. Despite the mixed season so far (5th place in the Premier League), the Red Devils are the clear favorites against the second division team.

We will find out from 9 p.m. German time whether they will live up to their role. Then referee Graham Scott whistles the match at Old Trafford.

All important information about the game and its broadcast on TV and live stream can be found here.

The game is not running on free TV today, but you will be on the linear pay TV station DAZN 2 find it. The broadcast starts five minutes before kick-off, i.e. at 8.55 p.m. Marco Hagemann will comment on the whole thing for you. You can also watch the same program as usual in the live stream via DAZN receive.

By the way, the streaming service has a lot more football up its sleeve. It doesn’t matter whether it’s Friday or Sunday games in the Bundesliga, Champions League, Ligue 1, Primera Division or Serie A – football fans will get their money’s worth here. And what are they? 29.99 euros per month for a monthly subscription or 24.99 euros per month for an annual subscription – many other sporting events are included.

Carabao Cup Round of 16: Today’s games

Three games are scheduled for Wednesday, with Charlton Athletic taking on Brighton & Hove Albion, Blackburn Rovers and Nottingham Forest ahead of United’s clash with Burnley. The bang of the round of 16 is scheduled for Thursday: Then Manchester City and Liverpool FC meet.

Carabao Cup, Round of 16: Yesterday’s games