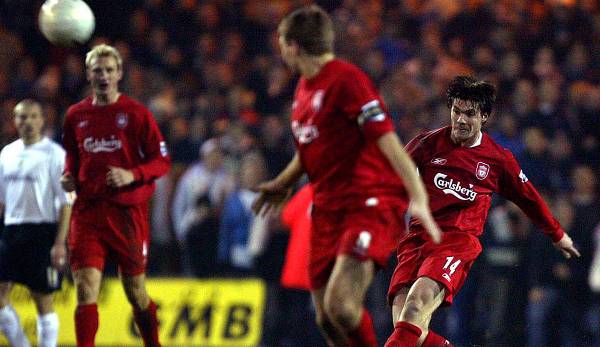 It doesn’t get any stranger: When Xabi Alonso scored from behind the halfway line for Liverpool FC, a fan won £25,000. The whole story.

Xabi Alonso’s playing career really had it all: Whether at Liverpool, Real Madrid or Bayern Munich – the Spaniard always knew how to convince. Defensively and offensively, today’s coach was a genius and provided numerous moments of surprise.

This was also the case in January 2006, when he scored a goal from within his own half. The strangest thing about the goal, however, was the story of one fan winning £25,000 as a result. So how did the sporting win come about?

Said fan goes by the name of Adrian Haywards. And now watch out, it’s getting really strange: Haywards says he dreamed of Xabi Alonso scoring a goal from the halfway line in July 2005 – so far, so good.

However, following the dream in July, Hayward placed a £200 bet at 125-1 odds that Alonso would score from within his own half at some point this season. That same season in January, his dream came true when the Spaniard pulled off just that feat against Luton Town in the FA Cup 3rd Round.

He invested part of the money in family vacations

“I’ve never made a bet that big before, but I had a feeling about it,” Newbury’s Hayward said in an interview at the time BBC News.

The betting portal could hardly believe his luck when the family man placed his bet: “When he placed the bet, we thought it was the easiest 200 pounds we had ever made,” said the betting company’s bookmaker Paddy Power.

But back to Adrian Haywards: Of course, the Liverpool fan always followed every game of the Reds, including the game in the FA Cup. “I was watching the Luton game on TV with my family and saw the goalkeeper in front of his line. I said ‘Shoot!’ yelled and he did it.”

The then 42-year-old continued to report on the legendary scene: “It seemed like an eternity before the ball wriggled in the net, but when it did I just freaked out.”

So the father of two actually won £25,000 and his dream became a reality. Incidentally, he invested part of the money in family vacations.

The betting company naturally congratulated him afterwards and said: “It’s great when such unusual bets pay off and it shows that dreams come true.”

We have to disappoint anyone who registers with the next best betting portal and thinks they can also finance their next vacation: Alonso, the god of football, has now ended his career. But who knows, maybe you just have to bet on your dreams…