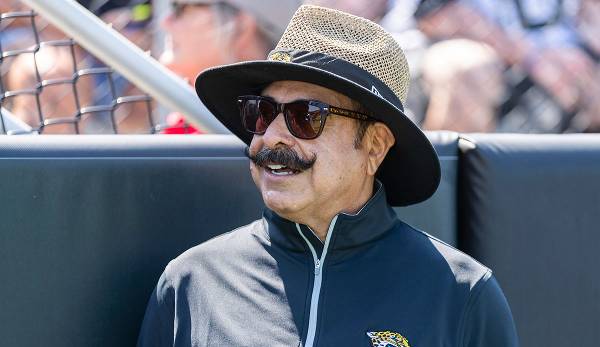 He messed with Donald Trump, lent his yacht to Jay-Z and Beyonce and is one of the richest men in the world: Shahid Khan (72) is the owner of the NFL franchise Jacksonville Jaguars and the Premier League club FC Fulham. It all started with a dishwasher job for $1.20 an hour.

No, there will be no film adaptation of his life. “That sounds like one of the most boring movies of all time. Even someone who entertains this thought breathes narcissism. I have no desire to do that”says Shahid Khan.

The strip wouldn’t actually be that boring. There are so many episodes from the life of the now 72-year-old entrepreneur that you could take the audience with you.

It’s 1967 when Shahid, just 16 years old, arrives in Chicago. There is almost 70 centimeters of snow on the roads windy city lives up to her name and blows brutal cold in the boy’s face. With $500 in his pocket, he left Lahore, Pakistan’s second largest city, to explore a new world. When he finds a supposedly cheap hotel, it is too expensive. How is he supposed to pay the nine dollars a night?

He finds a nonprofit that offers beds for $2 a night. Almost at the same time he finds a job as a dishwasher. Yes, the story sounds almost cheesy, but it really was like that. $1.20 an hour wasn’t much – for an American. For Shahid, that was a lot of money: “I thought: Wow, I earn more than 99 percent of the people of Pakistan and I have my destiny in my hands.”

Shahid Khan first loaned out comics, then his yacht to Beyonce

You could also start the film much earlier. Directly in Lahore. There, little Shahid would often stand in front of the National Stadium, where the cricket matches he so much wanted to see were being played. Sometimes he managed to get in when the doors were open, but timing was a must. Buying a ticket was out of the question.

Although he did not come from a poor background, his parents had good jobs, but it was not enough to fulfill every wish of the children. “They didn’t believe in spending money on a ticket”, recalls Shahid. So he had to come up with something to fund his favorite pastimes.

He came up with the idea of ​​lending his comics to other children for a fee. “That wasn’t lucrative”, he recalls. But it was enough to make ends meet and also to set aside a small amount of capital for other businesses. He later sold radios, which he still had to assemble.

One could start the film much later, and that is a final suggestion for Hollywood. Depicting how Shahid his 100 meter yacht he Kismet – in German: “fate” – which has a pool, movie theater, sauna and helipad, rents to US stars Jay-Z and Beyonce for $1.2 million a week.

His life is not quite as boring as Shahid Khan makes it out to be. It’s the perfect realization of the American dream. From – in the truest sense – dishwasher to billionaire, who is now one of the 100 richest people in America. Almost everything he touched in his life became a success.

If you ask him why, Khan is happy to backtrack. Because there is probably never a simple answer and because life is not as simple as we sometimes imagine. It is perhaps to his advantage that he was always prepared for it or did not know any other way for most of his life.

That’s why he doesn’t panic today, even if Fulham FC, which he bought from Mohamed Al-Fayed in 2013, has not long since belonged to the elite of the Premier League thanks to his money. There are investors in the Premier League who have a lot less money than he does, but he doesn’t believe in showering the club with capital and then making them dependent on him.

He calls the FFC one “small, ambitious club”the “something special” is. When he bought it, Khan said he wanted it “Guardians over Fulham on behalf of the fans” be. That’s what investors often sound like to emotionalize fans and win them over, but for nine years he has kept his word and has not changed the club’s DNA.

Of course, there are those around who would like to see the flow of Khan money strong enough to bring in the big stars and compete with Manchester City, Liverpool FC and rivals Chelsea, but Khan knows that not working: “A small, ambitious club needs a different approach than one of the bigger clubs. This is the only way to be successful and sustainable.”

He much prefers to invest in infrastructure. He recently had the Riverside Grandstand in the venerable Craven Cottage completely rebuilt: into a luxury paradise. There will not only be 8,650 exclusive seats, but also a restaurant, a hotel, a spa, exclusive apartments and a roof terrace with a wonderful view of the Thames.

“It’s all about how we can generate revenue to comply with regulations and invest in the team”, says Khan about the project. Everything for the sustainability of the club so that one day it can stay permanently in the Premier League. In the last five seasons, Fulham have been promoted three times and relegated twice. This should – if possible – end.

The topic of promotion and relegation is such a thing anyway. Shahid Khan has lived in the USA since 1967, he grew up with the (sports) culture and since 2012 he is also the owner of an NFL franchise, the Jacksonville Jaguars. There the show continues, no matter how you perform sportively – in the best league. It’s different in European football.

“That’s a huge difference with relegation and promotion”says Khan: “It’s like living on two different planets. How similar is Mars to planet Earth?” He would like to bring new approaches to the Premier League sometimes, but he also recognizes how much people in Europe cling to tradition.

“Much of English football is historical, it is set in stone”he says and has an example: “There was talk of maybe having 18 clubs in the league. But no. It should be 20. Why play with history?” The traditionalists also objected to him wanting to buy Wembley Stadium.

That was in 2018, when he had bid the equivalent of over 700 million euros. Even then-Sports Minister Tracey Crouch thought the idea was a good one, but an almost hostile mood was built up in the media and within the FA. The idea was that the FA could use the money to fund sustainable projects. “It was a win-win situation”he says in The Athletic: “But it turned into a kind of hostile takeover, and that really wasn’t our intention.”

He hasn’t completely given up on the dream, also because he is in it “some logic” sees. For English football, but of course also in his own interest. It sees what just a grandstand at Craven Cottage can do. He sees the revenue generated by arenas in the NFL. What would be possible with the most famous stadium in Europe…

NFL: When Shahid Khan wanted to buy the Rams

He still lets his Jacksonville Jaguars play there – a contract has just been renewed, so they will play at Wembley for the next three years. Already in October of this year there will be a duel with the Denver Broncos. The Jaguars aren’t big names, but he made them socially acceptable in England.

“When we started, we were 31st out of 32 NFL teams for recognition outside of the United States. Today we are definitely in the top five. Just look at how many people are wearing Jaguars shirts these days”he says proudly.

He is particularly proud of his NFL activities. He is the first club owner belonging to an ethnic minority. Actually, he wanted to buy the St. Louis Rams first. When he reached an agreement to buy 60 percent of the rights in 2010, minority owner Stan Kroenke made use of a clause that enabled him to match the offer. Khan went away empty-handed until he struck in Jacksonville in 2012.

With that, Shad, as his friends call him, has achieved what is a long-cherished dream of a former US President: Donald Trump. Khan even messed with this one. In the 2017 anthem dispute, the White House demanded that the national anthem be performed, while club owners opted not to force their players to do so.

“Total disrespect for our country”, US President Trump then tweeted outraged. At that time he could still do it. But Khan didn’t want to let that sit on him and took part in an interview USToday return: “He’s jealous of us club owners. This is a very personal issue with him!”

It was a reference to Trump’s failed 2014 takeover attempt at the Buffalo Bills. “He had a big goal of owning an NFL team. As president, that’s unlikely. Now he is trying to polish his image with personal attacks.” A year earlier, he was one of the NFL bosses who supported Trump’s election campaign with a donation of millions, but the break came relatively early when he gave Trump the “big splitter” called.

This episode alone would be a nice section in the film about Shahid Khan. The boy, who came from Lahore at the age of 16, first washed the dishes to finance his studies, started working for a car company, where he co-invented a one-piece shock absorber for trucks, bought the company a few years later and is now worth more than seven billion dollars, also because two thirds of all trucks and cars in the USA are said to have installed his company’s shock absorbers.

The man who now owns an NFL team and messes with presidents and a football club, but who is in the elevator and will probably never reach the spheres in which ManCity and Co. move and where the Khan team will never be will, even if he should do everything right. But he knows that all too well.

“is life fair” he once asked in an interview: “All my life I’ve been in situations where you don’t have any of the perks that other people have – other than the ability to think and deviate from the norm.” It doesn’t sound that boring at all.