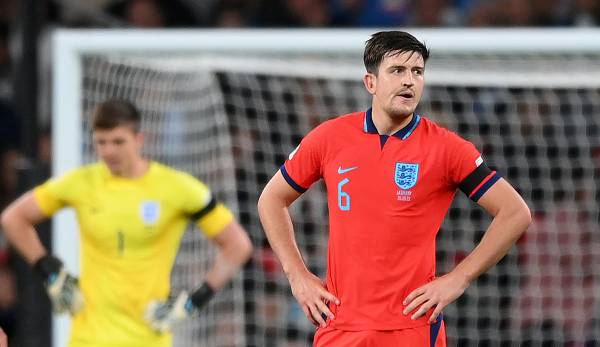 After costly mistakes in the Nations League duel with Germany, England’s central defender Harry Maguire again had to take a lot of ridicule and malice – even from Uli Hoeneß. The 29-year-old even apologized on social media.

“Mistakes are part of the game. My apologies,” Maguire wrote on his Instagramchannel still in the night after the 3: 3 against the DFB-Elf. “We fought back into the game great and showed a good attitude. You have to see the positive things and look to Qatar. Difficult times only make us stronger.”

Maguire was the main contributor to the Three Lions going behind in the second half. First he lost the ball in his own penalty area, then he fouled Jamal Musiala with an awkward kick. Ilkay Gündogan sunk the penalty due to make it 0-1 from England’s perspective.

Shortly before Kai Havertz made it 2-0 in the meantime, Maguire lost the ball while dribbling to Musiala on the offensive.

The second-most expensive signing in Manchester United’s history has long been something of a whipping boy and meme victim among English fans. After every mistake, the United captain is met with scorn and ridicule on the internet, so also after the Germany game.

Even Uli Hoeneß was able to help himself in his assessment of the game RTL couldn’t resist a dig at Maguire: “Of course, the game was a game in different phases. The first half was a skirmish from both sides, so you could tell that both teams are looking for their form. After half-time, our team played excellently for 20 minutes , 2-0 up, played totally superior – Maguire of course also helped a bit.”

England coach Gareth Southgate defended his defender: “I know everyone will be focusing on Harry now, but he also had some very important moments in the last two games.”

And Southgate continued: “Luke Shaw is another example, he’s a great footballer. What should we do? Don’t field him because he doesn’t play enough at the club, or field him because we saw what he can do today? There will always be a debate, but in these moments we have to back our best and most experienced players as long as we are not in a situation where it is almost untenable and impossible to nominate them.”

Maguire and England goalkeeper Nick Pope, who scored the final goal after England turned the game around, also had support from team-mate Reece James: “Anyone who plays here and makes a mistake is experienced enough that “They know they made a mistake. They don’t need to be told. Harry hasn’t played too much this season, he’s still finding his rhythm. We know his qualities. It was just a little slip. I’m me sure he’ll come back stronger.”

The kicking meme: This is how the network makes fun of United captain Maguire

However, Maguire has also been under criticism for a long time at United. Last season, the statistics showed that the defender, who moved from Leicester City to Manchester for 87 million euros in 2019, is at most mediocre in many core competencies in his position.

Nevertheless, the criticism was sometimes excessive, Rafael van der Vaart said on Dutch TV, for example: “He just sucks. Where did you look for him? You can find players like him at every amateur club in Holland.” The testimonies of the fans are often even more noticeable Twitter out.

This season, his poor form has cost Maguire his place at United under Erik ten Hag. Most recently, he came on as a substitute in the Premier League against Arsenal (3-1) and in the Europa League against FC Sheriff Tiraspol (2-0) only shortly before the end.

Overall, Maguire has made 149 competitive appearances (seven goals) in just over three seasons for United. He has made 46 appearances for the English national team (seven goals) and, despite his poor form, he can still hope for the World Cup in Qatar.

Harry Maguire: The performance data for United since 2019