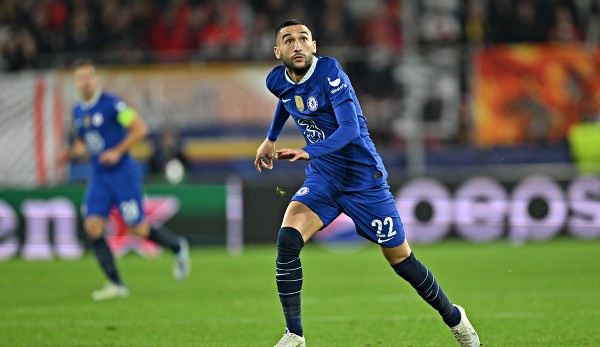 The January transfer window gives Graham Potter the opportunity to alter the squad as he sees fit. Who has no perspective anymore?

January is the time of resolutions, change and new beginnings. And Chelsea seem to be embracing this idea of ​​renewal.

This month could see the first step in a 2023 squad rejuvenation at Chelsea as the bloated squad is trimmed down and new owner Todd Boehly continues to throw his money around regardless of what outsiders think.

In the weeks leading up to the start of the transfer window, coach Graham Potter had a unique opportunity to work with the players in his squad who did not take part in the World Cup for an extended period away from the media attention.

He should now have a good idea of ​​who and what he needs in his squad and who has become redundant.

Here introduce yourself SPOX the six players who could leave the Blues in January.

Although his performances faltered as the tournament progressed, Ziyech was the center of attention as he made history for his country with Morocco in Qatar.

The winger has long been linked with AC Milan after disappointing on and off since moving from Ajax to west London in 2020 and his sedate style would suit the slower pace of Serie A well.

However, Ziyech’s performances at the World Cup have shown Graham Potter what he is capable of. A strong showing against Nottingham on New Year’s Day could mean he’s re-selected for a place in the side.

Before the World Cup, Pulisic was rarely used by his coach, but his strong performances in Qatar with the USA have made him a more important figure for Graham Potter.

However, should his run end as abruptly as so many before it, the ambitious Pulisic has indicated he is ready to consider a move in order to gain more playing time.

Manchester United, Newcastle and Arsenal are said to be interested in the American should he come onto the market.

In December, Pulisic said: “Right now I’m back at Chelsea. I’m focused and ready to end the season well. But you know how football works. Things change quickly and anything can happen.”

However, the fact that Pulisic was injured in the 0-1 defeat against Manchester City on Thursday could become a problem. If the American is out longer, it could significantly reduce the chances of a transfer.

Mendy being on this list would have been unthinkable a few months ago.

The keeper was out of shape and injured when Potter took the helm and he paid for it. Potter has relied on Kepa Arrizabalaga in his absence and has always relied on the Spaniard to assemble his top XI in recent weeks, while Mendy has had to limit himself to a reserve role.

The Champions League and AFCON winners are unlikely to settle for playing second fiddle. Milan are tipped as a possible target as the Rossoneri seek a replacement for the injured Mike Maignan.

But so far it hasn’t worked out, neither under Thomas Tuchel nor under Potter did he get a chance.

The 19-year-old doesn’t really belong in the first team, being far down the pecking order so a loan move is certainly being considered behind closed doors – especially at such a crucial stage in his development. Premier League prospects would no doubt be queuing in that case.

Casadei’s summer signing is evidence that Chelsea are attracting and developing many young players, with new owner Todd Boehly keen to build a large talent pool of players under the age of 25.

However, this also means that the competition within clubs for a breakthrough is even tougher.

Since moving from Inter, prolific midfielder Casadei has settled in well with the reserves. So he was taken to training camp in Abu Dhabi, where he caused a stir on his first-team debut against Aston Villa.

According to The Athletic The 19-year-old is set to be loaned out as early as January, presumably to speed up his development and prepare him for first-team assignments as soon as possible.

Juventus loan Zakaria has had a strange season in the Chelsea squad so far. After remaining totally absent until early November, the midfielder is now seemingly a key part of Graham Potter’s plans – but his position is in jeopardy.

The potential imminent signing of World Cup star Enzo Fernández could push him back down the pecking order and result in a departure in January.

With Zakaria out, it was rumored that Chelsea wanted to end his loan early – and that could be a topic again.

For now, however, Potter seems content with him. After the Bournemouth win, the manager said: “Whenever Denis has played, he hasn’t let us down. He has stayed professional and worked really hard. I’ve already said he has to be patient because we have some others too have good options in midfield.”