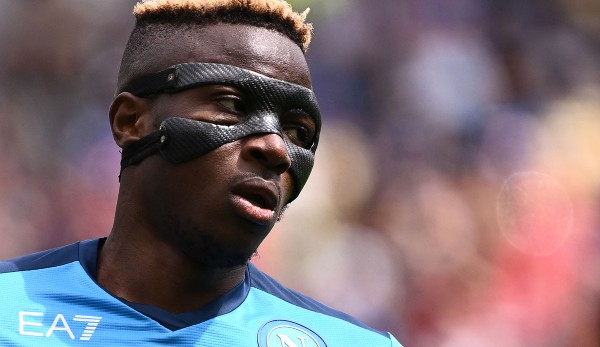 SPOX takes a look at Manchester United’s possible January signings. There are some big names involved.

United could still be active in the transfer market again in winter to increase the chances of ending the 2022/23 season on at least one Champions League place.

Cristiano Ronaldo’s controversial departure has freed up a spot in attack, while Aaron Wan-Bissaka’s slump in form means United must look to additional options in defence. But who are the players most likely to join ten Hag’s revolution?

Napoli is the surprise team of the 2022/23 season. With 13 wins and only two draws, Luciano Spalletti’s team stormed to the top of Serie A and, as Group A winners, reached the last 16 of the Champions League ahead of Liverpool.

Victor Osimhen was a key factor in that despite missing much of the season through injury. He scored 10 goals in 14 competitive games, including a spectacular late winner against Roma.

All of the Nigerian’s qualities were reflected in that goal: speed, strength, intelligence and technique as he had a great run, outwitting Chris Smalling and putting an untenable volley into the far corner of the goal.

That explosive pace and quick thinking in the last third is exactly what ten Hags United have been lacking this season. Another plus point for Osimhen: he also seems to have the physical toughness and sturdiness to break through in the Premier League.

The 23-year-old, who flopped in Wolfsburg a few years ago, is under contract in Naples until 2025. Osimhen’s transfer fee is estimated by several media at more than 100 million pounds (about 113 million euros). A hefty sum. However, Osimhen would be a player who could not only help immediately but also represent an investment in the future.

Louis van Gaal led an undefeated Dutch side to the semi-finals of the 2022 World Cup and there was no player more important in that impressive Oranje run than Denzel Dumfries.

In his preferred position at right-back, Dumfries was an integral part of the Dutch attacking game thanks to his strengths in forward movement. At the same time, the Inter star did not neglect his defensive duties. Of particular note was Dumfries’ performance in the Round of 16 against USA, when he added two assists and scored a goal in a 3-1 win.

The 26-year-old’s performances will come as little surprise to Inter-Tifosi as he has also caused quite a stir on the right flank in his first 17 months at the San Siro.

United, on the other hand, lack depth at right-back. Diogo Dalot is number one here currently, while Aaron Wan-Bissaka is having a miserable season.

Dumfries would be strong competition for Dalot and is reportedly available for around £42million (€51million) in January. But United will have to hurry, and Chelsea should also show a concrete interest in Dumfries.

Cristiano Ronaldo’s contract was terminated by United at the start of the World Cup. The controversial interview with Piers Morgan was the straw that broke the camel’s back.

The superstar had long since lost his regular place and the 37-year-old’s situation did not improve in Qatar as he was also benched by Portugal coach Fernando Santos.

Ronaldo’s substitute Gonçalo Ramos scored a flawless hat-trick in Portugal’s 6-1 Round of 16 win over Switzerland and although he failed to shine again in the quarter-final defeat by Morocco, Europe’s biggest clubs are now on the lookout.

United are also linked with Ramos. The forward has scored nine goals in 11 Primeira Liga games for Benfica this season. But it is also clear that a Ramos transfer would be a costly affair.

Rui Costa, Benfica’s president, has warned that the 21-year-old will only be sold if his stipulated transfer fee is paid. According to various media reports, it is a whopping 116 million euros.

Atlético Madrid star João Félix is ​​another Portuguese option for United. The versatile attacking player has reportedly been on United bosses’ wish list since he broke through as a teenager at Benfica.

Félix has struggled to settle in the Spanish capital since his €130m move in 2019 and Atlético president Gil Marín has recently hinted the striker could be sold in 2023 under certain circumstances.

“The relationship between him and the coach [Diego Simeone]the minutes played, his motivation at the moment – it makes you think that when there’s an option that’s good for the player and good for the club, it’s reasonable to consider it,” Marín told recently TVEwhen asked about Felix. “I personally would like him to stay, but I don’t think that’s the player’s plan.”

Marín’s confirmation of the friction between Félix and Simeone was backed up by the 23-year-old following his superb performance for Portugal against Switzerland at the World Cup: “When the circumstances are favourable, things just go better”.

Félix provided two assists and one goal in Qatar but his market value has fallen significantly this season as he has only managed seven goals in 18 games for Atlético. Atlético are reportedly demanding €100m and ManUnited are one of four interested clubs.

United are in a position to offer Félix a fresh start and a reunion with fellow internationals Bruno Fernandes and Dalot could be very tempting for him.

David De Gea has enjoyed the upturn in form that fans have been longing for under ten Hag. Nevertheless, one thing is clear: United’s number 1 is no longer among the absolute elite. Ten Hag would like a goalkeeper to play along and that doesn’t include 32-year-old De Gea either.

Porto’s Diogo Costa, on the other hand, has much more in common with the best modern goalkeepers like Manchester City’s Ederson and is in top form for his club in the 2022/23 season.

However, during the World Cup it also became apparent that Costa still has room for improvement. He nearly cost the Seleccao three points in the group stage opener against Ghana before another oversight gave Morocco a surprise quarter-final victory.

Costa is nonetheless one of the most talented goalkeepers in the world and it’s possible that United could secure him early and use him and De Gea for a transitional period.