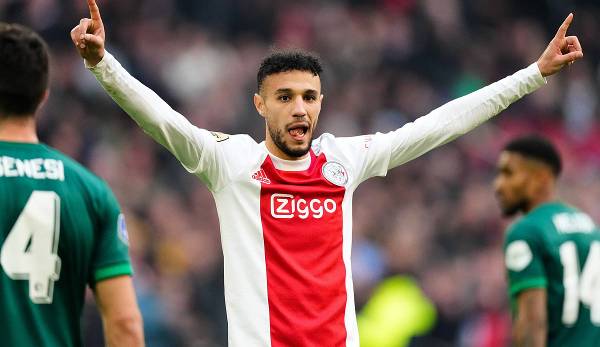 FC Bayern Munich is apparently about to sign Noussair Mazraoui. The right-back from Ajax Amsterdam is said to have already given the record champions a verbal promise. But who is the Dutchman with Moroccan roots anyway? What are his strengths? A brief portrait.

SPOX and GOAL take a look at Mazraoui’s career, his style of play and name the strengths and weaknesses of the 24-year-old.

Hard to believe: Although Mazraoui is a regular at Ajax and attracted the interest of FC Bayern, it was unclear for a long time whether it would even be enough for him to become a professional. “I never had the potential for the Ajax professionals,” he admitted self-critically in November 2018, a few months after his debut in the YouTube-Show By Andy in the car with ex-professional Andy van der Meyde.

A quite remarkable statement. By the time he made his professional debut, he had been playing for the traditional club for twelve years.

In 2006, Mazraoui moved from the Alphense Boys to the Ajax U10 youth team. There he went through all the youth teams before becoming an integral part of the squad of head coach Erik ten Hag in 2018. It was the second attempt at the flagship club. “I’ve been to the Talent Day before,” said Mazraoui van der Meyde: “At the time, Ajax were of the opinion that I wasn’t physically ready, but that they would keep an eye on me.”

Strictly speaking, his breakthrough in 2018 was Mazraoui’s third attempt: in 2016 he didn’t even get a new contract from Ajax, but he stayed at the club – “only because Ajax’s second team still needed players,” explains Chris Meijer from the portal Voetbalzone: “Mazraoui was the only player there in the 2016/17 season who didn’t get a contract and consequently no salary, no bonuses and no car.”

When Ajax then struck in November 2016 and gave him a new contract after numerous strong performances in the reserves, Mazraoui was initially just one of many. In the academy, he was initially used for a long time in (central) midfield. But because he was physically disadvantaged, he was moved to the right back position. “I had a really hard time there, too,” said Mazraoui. And yet, looking back, the change of position was a hit.

“Ten Hag wasn’t entirely happy with the right back line-up, so he tried Mazraoui,” says Meijer: “In the Champions League game at FC Bayern Munich (October 2018, Mazraoui scored a goal to make it 1-1, Note d. editorial) he finally made a name for himself.”

Mazraoui has now played 135 competitive games as a professional – and also made his debut in the Moroccan national team in 2018. The fact that he chose his parents’ home country and not the Elftal is simply because the Dutch football association has never really shown any interest – in contrast to the Moroccan one.

Off the field, Mazraoui (has a little brother and sister) is considered down-to-earth. Until 2018 he still lived with his parents in Alphen am Rhein (Dutch: Alphen aan den Rijn), commuted the good 40 kilometers to the Ajax site. “To protect myself,” Mazraoui said, probably half ironically, half seriously. “It stops me from doing stupid things.” But now he lives with his girlfriend (also Dutch with Moroccan roots) in an apartment in Amsterdam.

The right-back is a weapon, especially on the offensive – and interprets his role as such. Mazraoui does not define himself by his physique, but by his game intelligence, speed of action and playing strength. Mazraoui is technically good, in ten Hag’s 4-3-3 system an additional danger for the opponent on the right side. Particularly noticeable in the last few weeks: the right-back has not stuck to the sidelines, often moving inwards to participate in the combination game – instead of waiting outside to be brought into action.

In the last third he repeatedly creates dangerous moments – indirectly via crosses and passes or directly with his own shots. He currently has two assists and five goals in 23 games in the Eredivisie. His 4.8 ball actions in the opposing sixteen per 90 minutes are topped by only four offensive players at Ajax (assuming at least 1000 minutes of play). Overall, he has 89 shots on goal this season (47 shots on goal, 42 assists), making an average of three shots on goal per 90 minutes.

Because he hardly makes any mistakes when in possession (86 ball actions/90 minutes), this almost automatically makes him an interesting player for Bayern coach Julian Nagelsmann. The ex-Leipzig coach forces his teams to find solutions with the ball and can switch quickly.

In Nagelsmann’s preferred system with a back three and attacking full-backs, which he gradually implemented in Munich and probably wants to continue playing, Mazraoui could play to his strengths even better than at Ajax Amsterdam in the back four. And a transfer from Mazraouis would also be a trump card for Nagelsmann himself. According to table football Nagelsmann’s chain of three in Bayern’s leadership is “controversial”. The chain of four is therefore considered a “better solution” due to the stabilization of the structure. Only: Nagelsmann lacks the right types of player on the flank for the perfect implementation of his system or his forward-looking style of play. Benjamin Pavard, for example, lacks the last punch on the offensive, while Leroy Sane sometimes works too little backwards. Not so Mazraoui.

“Mazraoui and Nagelsmann? That would fit really well,” says an insider SPOX and GOAL.

Mazraoui is an all-rounder who also shows solid performances in defence. The Ajax graduate fights 12.2 tackles per 90 minutes – the best of any Ajax defender!

Diligent in the backward movement – but not always successful. Despite the fact that he throws himself into every duel, Mazraoui’s defensive behavior is the only small weakness.

His duel rate (56 percent) is impressive as a full-back, but it can be improved and is weaker than in the previous year (61 percent).